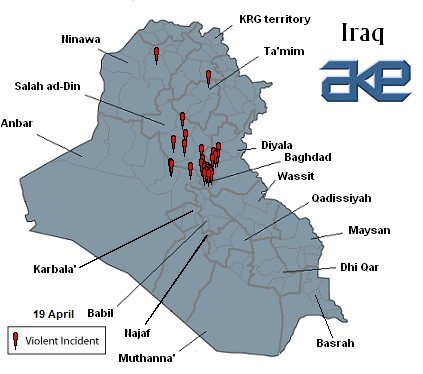 By JohnDrake on 19th April 2012 in Weekly Security Update

Levels of violence fell slightly in Iraq last week. At least 38 people were killed and 40 injured in nationwide incidents. However, anecdotal evidence on the ground indicated that many Iraqis felt it constituted some sort of calm before the storm. This fear was realised earlier on 19 April when a spate of bombings struck the centre of the country. Last week a total of 15 bomb attacks (a slight decline from the previous week) left 19 people dead and 34 injured. Small arms fire attacks left 15 people dead and six injured. There were no suicide bombings, mortar attacks or abductions reported. However, events on 19 April bucked this trend considerably. 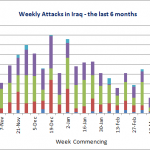 Latest Spate of Attacks
A series of seemingly co-ordinated attacks swept the centre of the country earlier today. The security forces were the most common targets, although officials and civilians were also singled out. Blasts were reported in Ba’qubah, Baghdad, Fallujah, Ishaqi, Kirkuk, Mishahdah, Mosul, Ramadi, Samarra, Taji and Tarmiyah. In the capital, bombings rocked the districts of Amil, Amin, Ghazaliyah, Kadhimiyah, Mansour and Za’faraniyah as well as along Palestine and Haifa streets. A shooting was also reported in Dujayl, while mortar attacks have caused localised damage but left no casualties in Tikrit and Samarra. At the time of writing the number of casualty is still being verified, but at least 46 people have died so far – a figure which will likely alter over the coming hours and days. This already exceeds the total figure recorded dead over the course of all last week. 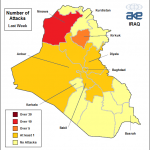 Geographical Trends
Last week, militancy was concentrated in Mosul more than anywhere else last week, while the northern city of Kirkuk also saw a number of attacks. Kurdistan remained quiet, although as mentioned last week, a civilian was killed in a landmine explosion in Sulaymaniyah province. Until the latest blasts violence was spread fairly evenly throughout the central provinces last week, and Baghdad was unusually quiet. The southern provinces were equally calm although this is more customary for the region. That said, there has been a recent trend in the use of ‘percussion’ or ‘sound’ bombs by militants in the southern urban areas. These are designed to make a loud noise and localised blast, so as to cause intimidation without inflicting casualties or significant damage. They are more of a terrorist warning than anything, but nonetheless still denote the presence of hostile organisations in the normally quiet region. The majority of the devices in the last batch of attacks appear to have targeted officials and clerics associated with Shi’ah political organisations, or members of the Da’wah party. The risk is highest in cities south of Baghdad, including Basrah, Najaf, Nassiriyah, Diwaniyah and Karbala.

One Response to Weekly Security Update for 19th April 2012