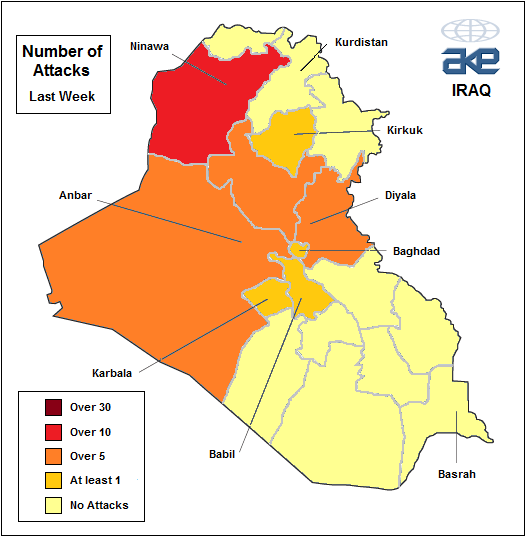 By JohnDrake on 3rd May 2012 in Weekly Security Update

Levels of violence fell in Iraq last week following a spate of al-Qaeda attacks the previous week which killed dozens of people. Nonetheless, conditions were still relatively bad. At least 47 people were killed and 65 injured in nationwide incidents.

Geographic Distribution
Mosul was in fact the most violent part of the country last week, followed by Sa'adiyah in Diyala province, where Kurdish civilians appear to have been singled out for attack by Arab militants. Kurdish Regional Government (KRG) territory on the other hand remains relatively secure. Baghdad, Tikrit, Kirkuk and Fallujah also saw several attacks.

April Casualties
According to ministry statements at least 126 Iraqis were killed in violence during April. However, AKE research contradicts this, suggesting the much higher figure of 231 dead. Either way, conditions worsened over the course of the month, with the majority of casualties inflicted during a spate of co-ordinated al-Qaeda attacks on 19 April.