Over the past week, much fanfare has attached to a 9-point ultimatum letter that was written by the Maliki critics convening in Arbil on 28 April (Kurdish president Masud Barzani, Ayad Allawi and Usama al-Nujayfi of Iraqiyya, Muqtada al-Sadr) and then sent to the bloc leader of the Shiite alliance, Ibrahim al-Jaafari. It has been clear for some time that the letter demanded Maliki’s adherence to the contents of the letter within 15 days or a move to sack him would be initiated in parliament. However, the 9 points themselves have not been published before they appeared in the hardcopy version of the Sabah newspaper this morning [Saturday]. 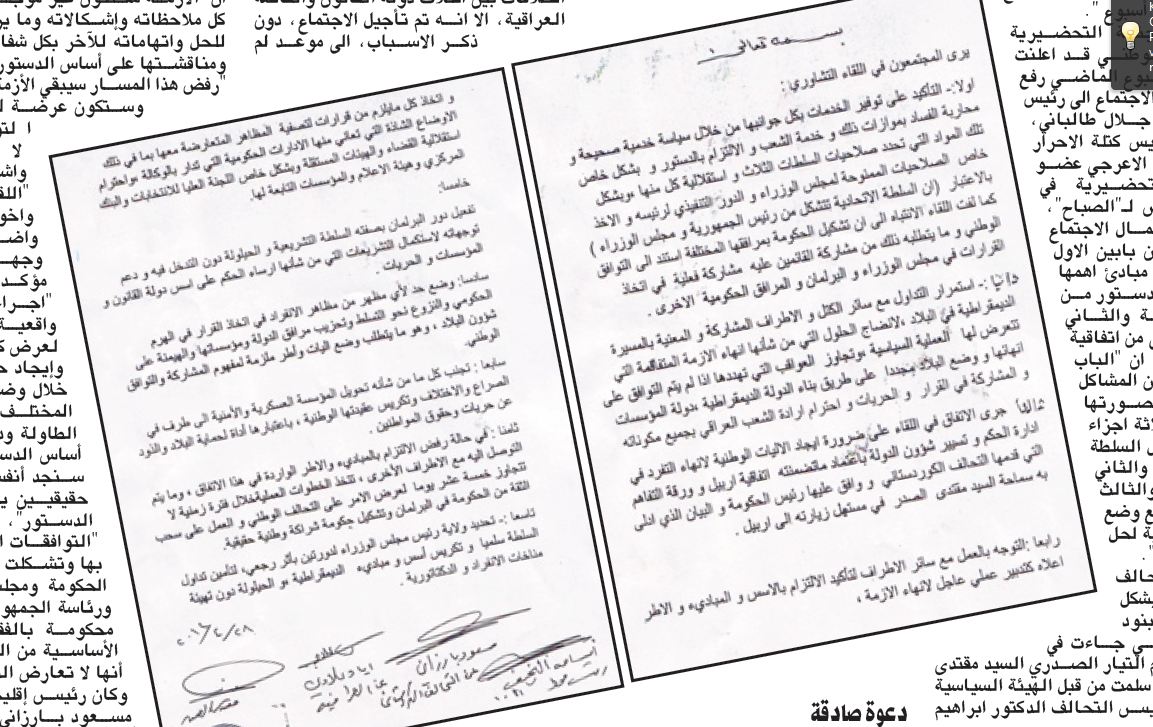 Unfortunately, the letter exudes the usual Iraqi grandiosity and abstraction that have also been the main weaknesses of previous “agreements”. The first two points include generalities like providing services to the Iraqi population, adherence to the constitution, striving for consensus and maintaining democracy! Which Iraqi wouldn’t subscribe to that in theory?

The third point is somewhat more specific, in that it calls for the adoption of the Arbil agreement, the 18 recent points of Muqtada al-Sadr (all of which are useless generalities except for a praiseworthy call for Iraqi support for the oppressed peoples of Bahrain and Syria alike), and, apparently added for good measure, the “memorandum of understanding which the Kurdistan Alliance presented and to which the chief of the government agreed”. The latter sounds perhaps like the Kurdish 19 points of autumn 2010 which were augmented to 25 points in bilateral dialogue with the Shiite alliance in late October that year? Maliki is supposed to have said yes to that and possibly signed as well, but this is difficult stuff that is even harder to implement than Arbil.

The fourth point of the leaked letter is a little bit more specific in that it addresses the problems of ministries governed by deputies and acting ministers. It also underlines the independent commissions and the importance of them staying independent. The electoral commission, in particular, is highlighted as an area of concern.

Alas, with the fifth point it is back to hopeless generalities. Revive the role of parliament. Yeah right. Bring it to life! Maybe that is not for the executive to take care of after all. Sixth point, unsurprisingly, bring an end to dictatorial tendencies in government, please. Seventh, avoid a politicized army and security forces.

The eighth point contains the ultimatum: Unless there is adherence (iltizam) to these principles the matter will be left in the hands of the Shia alliance to initiate a move to withdraw confidence in the government and form a new one – a “real partnership government”. Oh, and just one more: Ninth, the premiership will be limited to two terms to secure peaceful transfer of power and democracy and avoid dictatorship. Just an afterthought, apparently.

In a way, the hapless language of the letter rescues Maliki and the Arbil conventioneers alike. What is demanded, after all, is “adherence” not “implementation”. Probably the safest thing for Maliki is to make that declaration before 13 May. “I adhere”. He will probably add, as long as everything is within the constitution. Most of it isn’t, of course, and actually requires several years of special majority votes in parliament, popular referendums and possibly supreme court reviews. But that is a different story. It is one that was conveniently forgotten at Arbil in 2010 and it can be forgotten again.

Both sides will declare victory; Maliki will remain premier as long as the Sadrists don’t get even more exasperated than they already are. Perhaps the one remaining hope now relates to the electoral commission: Maliki is unhappy with the current one and needs a new one. That can only happen via a majority vote in parliament. Maybe that – more than letters from Arbil – can serve as an effective reminder that he also sometimes needs to broaden his alliance beyond its current state.