By Gary Sandiford on 5th September 2012 in Weekly Security Update

The total number of reported incidents across Iraq for the period 27 August to 2 September 2012 was 111. This is slightly lower than last week’s figure of 114, and in line with the 2012 weekly average of 110 incidents. While the Ramadan period saw elevated incident figures, this week has been the second consecutive reporting period since Ramadan where rates have remained at average levels. The continuation of intense Iraqi Security Forces (ISF) activity in Baghdad, North, North Central, and West regions appears to have disrupted extremist groups from prosecuting attacks at the tempo seen through the Ramadan period.  The last few weeks have also seen lower numbers of high profile attacks (HPA); possibly indicating that extremist capability may have been impeded following ISF pressure. In the South East region, a slight increase in incidents was reported this week, with a number of incidents of note in Basra. 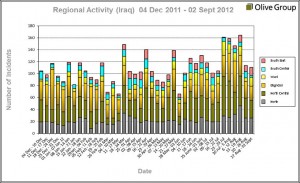