By Gary Sandiford on 24th October 2012 in Weekly Security Update

The total number of reported incidents in Iraq for the period 15 – 21 October 2012 was 144.  This is some way above the 2012 weekly average of 117 and marks a considerable increase in violence following a two week period of relative calm.  The major increases in reporting occurred in Baghdad and the North Central Region, with insurgent violence appearing to be a primary factor.  Given the trend of elevated violence sustained since the end of July, with only brief periods of respite, it now appears more likely that the levels of violence associated with the summer campaign have become the norm, at least in the medium term. Mosul again featured prominently in national reporting, with both communal and insurgent violence being amongst the most intense across the country. The Tigris and Diyala River Valleys north of Baghdad both saw an appreciable increase in the use of explosive devices – with a possible campaign to target communications infrastructure occurring across Salah al-Din Province – while Kirkuk Province and Tuz District, just to its south, both saw surges in the targeting of Iraq Security Forces (ISF), including the use of large car-bombs (VBIEDs).  Overall reporting from Baghdad also increased and in addition to this there were numerous large mass-casualty attacks – which the capital had been free of during the previous two weeks.  By contrast the southern half of Iraq– meaning here those areas below northern Babil – remained very quiet with only low level incidents occurring, all of which appear to reflect isolated communal, criminal or political disputes.  This reflects long terms patterns in the Shia majority provinces of southern Iraq. 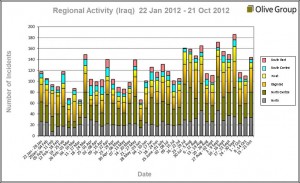