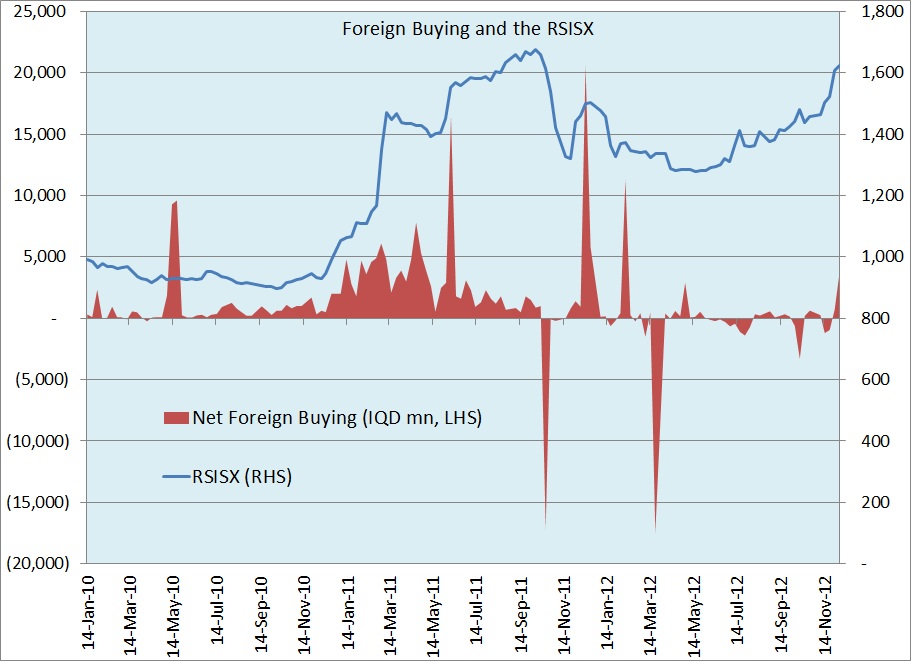 Another roller coaster year for the ISX is drawing to a close. By the middle of May, the Rabee Securities RSISX index had fallen 24% from its early October 2011 peak. Since then, the market has staged a dramatic rebound. As of December 8, the index was down just 3% from the October high and up 8% for the year.

This rebound is all the more remarkable because it has occurred in the absence of any pick up in foreign participation. In 2011 foreigners were net buyers in 97% of the trading weeks with a share of monthly volume that exceeded 10% in all but three months. This year, foreign net buying has fallen sharply. (See chart.) Foreigners have been net sellers in about 40% of the trading weeks so far. Their monthly-volume share has exceeded 6% in only two months. (See the latest Rabee Securities Weekly for a nice chart of the foreign share of monthly volume.)

There is also no obvious catalyst for fresh inflows of foreign money at this point. While the regulators have finally decided to offer custodian bank licenses, HSBC has apparently lost interest in providing share custody in Iraq and no one else has stepped up to take its place. (See this post for more on the custody issue.) EFG-Hermes also seems to have suspended its swaps program, shutting down another potential channel through which institutional investors might have accessed the market. (There’s more on the EFG swaps here.) Even the much-vaunted Asiacell IPO, which I once thought might at last put the ISX on foreign fund managers’ radars, now appears to be targeted mainly at local individuals.

This failure to attract outside money is not the end of the world, however. When the right economic fundamentals are in place, emerging markets can easily go up without foreigner investors. Think of the largely closed Chinese and Saudi markets for example. Or Kuwait’s infamous Souk al Manakh, which rose to such dizzy heights in 1982 that it was briefly the third largest market in the world after the US and Japan.

For the ISX to keep going up, problems like share custody don’t really need to be solved. The important thing is for the Iraqi economy to stay on its current high-growth trajectory. As long as the listed companies' earnings are growing at double digit rates and local investors are flush with cash there’s really no reason why this year’s home-grown rally shouldn't continue into 2013.

2 Responses to A Home-grown Rally