By Gary Sandiford on 12th December 2012 in Weekly Security Update

The total number of reported incidents in Iraq for the period 3-9 December 2012 was 134.  This is above the 2012 weekly average of 118 and is a slight increase on last week’s total of 131.  Insurgent activity remained at elevated levels following the coordinated attack series on 27 and 29 November, but saw a return to attacks against more routine targets such as government and security personnel. The political impasse between the Federal Government and Kurdistan Regional Government (KRG) over the establishment of the Tigris Operations Command (TOC) continues, and despite recent international involvement there is still no resolution.  Towards the end of the next reporting period, Shia pilgrims will begin their travels to Karbala for Arba’een  (3 January 2013), with the pilgrimage starting up to 15 days prior by those travelling on foot.  Such events remain a target for Sunni insurgent groups and attacks against pilgrims travelling along major routes, and against rest areas where pilgrims congregate are considered likely. 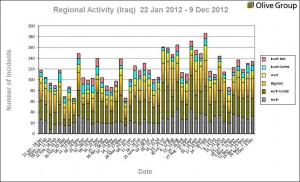