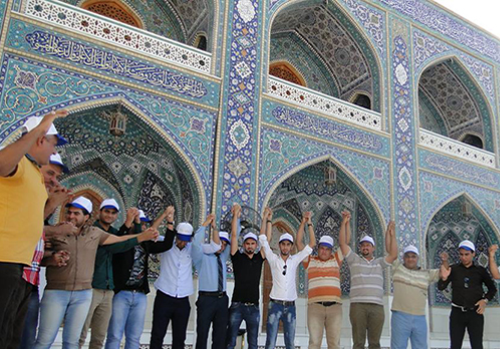 While the Iraqi government seems to be in a coma when it comes to bridging the gaps between the different segments of Iraqi society, Iraqi youth volunteers have opened the doors of communication among themselves in an effort to develop a true sense of citizenship. These youths, who belong to different sects, groups and regions, became acquainted with one another during events held by the Masarat Institute, which promotes the protection of minorities.

They then continued to communicate and develop a broad network of cooperation spanning Iraq's various regions, while the Baghdad government remained only capable of convening ceremonial conferences. These youths call themselves Citizenship Ambassadors. Each one considers him- or herself to be an official representative of Iraqi citizenship and responsible for spreading a culture of co-existence across the Iraqi spectrum.

Included among these ambassadors are Zuhair, a Yazidi; Mona, a Bahai; Lara, a Christian; Insijam and Itifaq, Mandean twins; Ahmad, a Turkmen; Marouj, a Kurd; Hussein, a Shabak; Wissam and Wojoud, black Iraqis; Muhannad and Ahmad, from the southern provinces; and Seif from Anbar among many others. The members represent the majority of Iraq's various identities through their different nationalist, religious and regional affiliations. At the moment, the project includes 10 teams comprising 400 volunteers throughout Iraq.

The Citizenship Ambassadors aim to correct the stereotype of Iraqi society as divisive by personally getting to know one another and holding constructive discussions. Each participant forms a team of members from his or her province to create a comprehensive picture of Iraq's diversity, reflecting an objective picture of all the components of the country. They then gather at workshops, where they discuss the foundations and principles of citizenship.