Amid continued unrest in the outskirts of Fallujah and Ramadi, ISF forces regained control of Sulaiman Pek, Salahuddin province, which was overrun by ISIL militants on 13 February. This outcome contrasts with the situation in Anbar, where a much more complex tribal landscape has prevented a direct assault on urban areas held by insurgents. While the focus of the government appears to be centred on containing the insurgency in the west, militants have continued to capitalise on the Anbar crisis to launch mass-casualty attacks in neighbouring provinces. 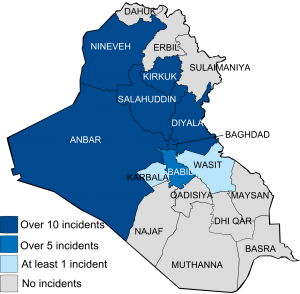 This tactic was reflected in high levels of violence across the country, and an unusual series of VBIEDs in Babil governorate. The Maliki administration, while cautious not to antagonise moderate Sunni factions, is primarily seeking to consolidate Shia support ahead of the April elections. In this perspective, the Anbar crisis has indirectly created a window of opportunity for Maliki. ISIL militants have indeed shifted their resources away from southern, Shia-dominated provinces, which have avoided sophisticated militant incursions since November 2013. Despite a deteriorating security situation elsewhere in the country, the relative calm across the south-eastern regions is set to benefit the ruling coalition in the lead-up to competitive elections.

In light of this change of pattern, it now appears in Maliki’s best interest to avoid any delay in organising the votes. With elections approaching, any progress in the political sphere will probably be determined by the nature of coalitions which will form in April. Stagnation will therefore continue to impact on levels of violence across the country, with northern and central governorates expected to attract most violent incidents.

Northern provinces continued to witness series of complex attacks, with unchanged patterns of violence as Nineveh and Salahuddin remained most vulnerable to militant activity. On 19 February, a VBIED detonated on an army patrol in Mosul, injuring three soldiers and a civilian. On 21 February, a car bomb hit the home of a Kurdish politician in Zummar district, resulting in material damage only. In Salahuddin, five VBIEDs detonated in several districts, killing scores of civilians and ISF elements. On 22 February, a sequence of car bombs killed four ISF members and wounded 18 civilians. Diyala governorate was not immune to sophisticated assaults, as a VBIED detonated in Baquba without causing any casualty. While ISIL militants remain committed to exporting the western insurgency to northern provinces, their efforts appear to be focused on governorates bordering Anbar. In contrast to the aftermath of the capture of Fallujah in December 2013, Kirkuk and Diyala governorates have indeed avoided mass-casualty attacks in recent weeks. Though this trend is likely to be repeated over the next reporting period as ISIL insurgents can deploy more easily in Salahuddin and Nineveh, all northern provinces will remain vulnerable to militant incidents. Meanwhile, Kurdish provinces remained free from violence. 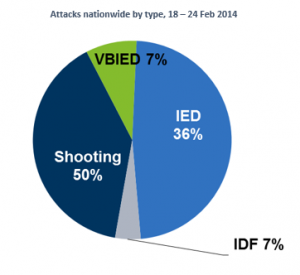 While car bombs detonated in the capital, their frequency remained below weekly averages as militant resources were distributed across several governorates bordering Anbar. Baghdad nonetheless attracted most deadly incidents, with series of IEDs killing scores of civilians, soldiers and police officers. On 18 February, a sequence of three VBIEDs hit a busy area of the capital, wounding at least 31 people. In Anbar, the situation remained unchanged as the standoff between insurgents and ISF forces continued to result in clashes in the outskirts of Ramadi and Fallujah. On 18 February, a VBIED hit a police vehicle in Haditha, injuring a police officer as well as five civilians. On 22 February, another car bomb killed six civilians and an ISF element, and destroyed five military vehicles. On 24 February, several soldiers were killed in eastern Ramadi after a car bomb hit their vehicle. A direct assault on urban areas controlled by ISIL insurgents remains unlikely before the elections, given the lack of intelligence support and the high probability to hit civilians, and the situation should therefore remain stagnant.

Incidents recorded across southern provinces remained consistent with the data collected over the previous reporting periods, with the situation in Babil contrasting with south-eastern governorates. Owing to its proximity with both Anbar and Baghdad governorates, increased levels of militant activity translated in VBIED sequences across several districts of Babil. On 18 February, seven car bombs injured at least 84 civilians and killed scores, in the most sophisticated incident in months. In Wasit, rounds of mortar fire killed 16 civilians and injured 73 others. These mass-casualty attacks contrasted with levels of violence seen elsewhere across the south, which remained free from major incidents including Basra. The fact that Shia strongholds have remained relatively safe for weeks is expected to benefit Maliki in polls and consolidate support around the government’s current strategy. Although south-eastern provinces are expected to remain calm given the trajectory currently followed by militants, it remains possible that insurgents will plan incursions into Shia provinces in a bid to undermine Maliki, especially if the Anbar crisis does not affect the elections. 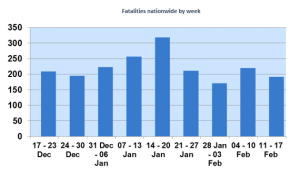