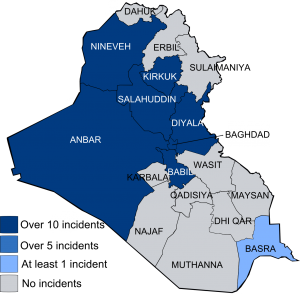 Tensions between Prime Minister Nouri al-Maliki and Parliament Speaker Osama al-Nujaifi culminated this week, after the latter refused to submit the annual budget to parliament for approval. On 05 March, PM Maliki challenged the legitimacy of the institution and declared that fiscal policies could ultimately be enforced without a vote. This provocative stance led Nujaifi to accuse Maliki of disregarding the political process and threaten to withdraw confidence. This escalation also coincides with strained relations between Erbil and Baghdad over budget allocation, which the Kurdistan Regional administration has rejected on the grounds that it was not consistent with the amount stated in the constitution. In a context of approaching and competitive elections, these disputes mirror the different strategies followed by Iraqi politicians and which will set the stage for the post-election negotiations.

Maliki has been accused by his opponents of manufacturing crises to distract attention from the deteriorating security situation in northern and central governorates. Meanwhile, Nujaifi’s attitude towards budget issues could be seen not only as an attempt to undermine Maliki, but also as a move to court Kurdish constituencies, whose support was determinant in the previous elections. Stagnating political dynamics between the Shia and Sunni leaderships continued to be reflected in high levels of violence across the country, with complex attacks concentrated in the central provinces of Anbar, Baghdad and Babil. Patterns of violence have evolved since the outbreak of the Anbar crisis in December 2013, and militant activity now appears alternatively focused on the northern and central regions. This shift results from the growing security vacuum in Sunni-dominated areas around Baghdad, and which has been exploited by ISIL militants to establish strongholds. These provinces will therefore continue to attract most incidents over the next weeks.

In contrast with previous reporting periods, when militants allocated much of their resources to northern areas, VBIEDs were largely avoided and were only witnessed in Nineveh and Salahuddin on 04 March. A complex attack in Salahuddin involving a car bomb, a group of suicide attackers and directed against a government building, killed two civilians and injured at least 34 ISF elements. The explosion of a VBIED near Mosul caused two fatalities and wounded several soldiers. Most of the other reported incidents consisted of IEDs and small arms attacks. In Kirkuk, a suicide bomber detonated himself near a police patrol, killing one civilian. Given current security dynamics, northern provinces are likely to be targeted with deadly and complex assaults over the next weeks, with militants capitalising on Anbar and the growing disaffection of Sunnis with the government. Meanwhile, Kurdish provinces remained free from major incidents despite growing tensions with Baghdad. 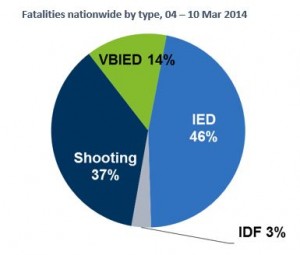 Central provinces attracted most of the violence recorded across the country, with complex and deadly attacks witnessed in Baghdad and Anbar governorates. VBIED sequences returned to the capital, after three weeks of relative absence. As militants currently concentrate their efforts on northern areas having shifted away from southern provinces, ISIL insurgents appear to launch series of VBIED attacks against central governorates every three weeks on average. On 05 March, eight car bombs detonated in Baghdad, followed by another sequence on 06 March.

An explosion near a mosque in the A’amil area killed one civilian and injured 19 others, while another detonation resulted in six fatalities and 21 injuries. Despite a disrupted information flow in Anbar, at least four VBIED attacks were reported in Ramadi and its outskirts. On 07 March, a car bomb detonated at a police headquarters, killed one policeman and injured six others. The fact that Anbar has been largely absent from Maliki’s political discourse over the past weeks points towards stagnation rather than solution, and in current circumstances the standoff between the ISF, Sunni tribes and insurgents is likely to continue over the next months. The unrest is therefore likely to continue dictating insurgent tactics, and levels of violence will be sustained.

Owing to its proximity with central governorates and its large Sunni population, Babil continued to attract most violent incidents across southern provinces, with an increase in militant activity reflected in VBIED sequences. On 06 March, five car bombs detonated in several neighbourhoods of Hilla and were directed against civilians, ISF elements and government infrastructure. On 09 March, one of the deadliest incidents reported this month killed at least 47 people and injured over 100 others, when a minibus packed with explosives detonated against a checkpoint in Hilla. Other incidents involving IEDs killed several civilians. South-eastern governorates remained free from major incidents and have continued to avoid mass-casualty militant incursions. Most assaults are usually connected to personal disputes, illustrated in a small arms attack which killed an individual near his home in Basra. This trend is expected to be sustained and the south-east should remain largely peaceful over the next weeks. 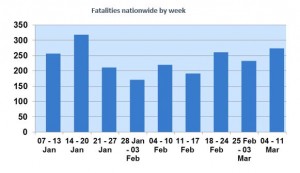