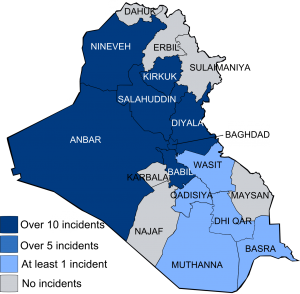 As parliamentary elections approach and competing coalitions seek to position themselves ahead of the votes, the reporting period was marked by a series of movements in the political sphere. In Kurdistan, after months of unsuccessful negotiations, the KDP and Gorran reached an agreement for a new government along with the Islamic League, on 20 April. While the PUK remains reluctant to join this coalition due to their claim over the Interior Ministry, traditionally controlled by the PUK, expectations are that Kurdistan’s internal issues will be resolved within the period leading up to the votes. In light of the current standoff between Erbil and Baghdad on oil and budget distribution, Kurdish lists will indeed stand a greater chance of influencing central authorities if they compete under a united coalition, which requires reaching a consensus involving the three main parties. In Baghdad, political divisions continued to manifest in offensive rhetoric and personal accusations, with Prime Minister Nouri Al-Maliki accusing Parliament Speaker Osama Al-Nujaifi of trying to delay the elections by blocking the budget bill. Given the nature of Iraq’s political system, growing political divisions and the difficulty of holding elections in restive Anbar, the process of designating the next Prime Minister is likely to last months and the result unlikely to satisfy a majority of Iraqis. This disaffection with politics continued to be reflected in high levels of violence across the country, with northern and central governorates attracting the majority of incidents. As predicted, the willingness of ISIS militants to strike southern provinces manifested in a return of VBIED attacks, in a bid to influence the voting in Shia-dominated areas. The next weeks are likely to witness a substantial increase in violence, as ISIS fighters remain fundamentally opposed to the democratic process and will undoubtedly seek to disrupt the elections by launching mass-casualty attacks against key areas of the country.

In line with previous weekly averages, most deadly incidents remained concentrated in Nineveh and Salahuddin governorates, though VBIEDs were nearly avoided across the region. While most of the violence continued to be directed against ISF elements and civilians, a militant attack on the Baiji pipeline on 18 April provided a reminder of the threat to the oil and gas industry in northern provinces. Armed clashes between ISIL militants and ISF elements continued to fuel incident levels in Diyala, with most attacks concentrated in and around Baqubah. Meanwhile and despite repeated claims that the oil dispute opposing Baghdad and Erbil was close to an agreement, Kurdish Prime Minister Nechirvan Barzani reiterated that no progress had been made over the issue and warned that the KRG’s patience had limits, in a clear attempt to put pressure on the central government. These continued tensions may have precipitated the agreement between the KDP and Gorran, as the previous elections showed that a united Kurdish coalition would have considerable leverage against Baghdad. Given demographic realities and the presence of ISIS strongholds in all northern governorates surrounding Baghdad, election-related violence is expected to remain focused on the north. 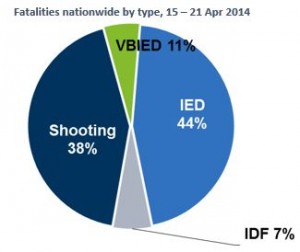 Levels of violence remained elevated in Baghdad and Anbar, with districts of the capital attracting most incidents. Series of VBIEDs caused dozens of casualties, with most significant attacks recorded in Sadr City and Karrada districts, two Shia-dominated areas. On 19 April, three suicide bombers attacked the headquarters of an army division, injuring four soldiers. Following the assault, a car bomb detonated on the same location, killing four officers and wounding scores of soldiers. Meanwhile, Anbar witnessed a surge in violence, as shelling on civilian areas caused dozens of casualties in Fallujah and series of suicide bombings killed scores of soldiers in Ramadi. The pace and intensity of attacks reported in Anbar point towards an intensification of the conflict, with insurgents reinforcing their positions and the ISF showing the limits of their capabilities. On 16 April, two car bombs hit two checkpoints of Ramadi, killing at least five soldiers. In the lead-up to the votes, areas in and around Baghdad will remain the biggest hotspot for violence, whilst any movement on the Anbar front is unlikely in the short to medium term.

In line with previous assessments, incident levels across the south noticeably increased and expanded to areas generally insulated from violence, with attacks recorded in Muthanna and Qadisiyah. While south-eastern governorates had been preserved from car bombs since December 2013, VBIED attacks returned to the region. On 20 April, two car bombs detonated across the Najmi district of Muthanna province, killing four civilians and wounding 45 others. In Babil, a VBIED killed three people and injured four, amid a series of IEDs and small arms attacks recorded in the restive province. Other governorates witnessing militant activity included Dhi Qar, Wasit and Qadisiya, with accounts of tribal fighting which may signify that intra-Shia violence will be on the rise in the lead-up to the elections. The nature and locations of significant incidents recorded throughout the reporting period back the view that militants are likely to strike southern governorates to disrupt the electoral process, and levels of violence are therefore expected to increase. 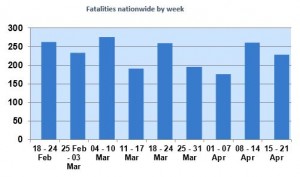