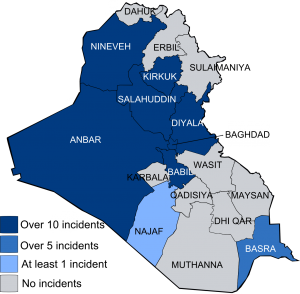 Violent incidents sharply increased in their intensity over the reporting period with 453 fatalities recorded nationwide, doubling previous weekly figures. This significant uptick was prompted by a multi-front ISIS assault across the north, with militants attempting to seize cities in Salahuddin province, and succeeding in controlling parts of Mosul, Iraq’s second largest city, after days of fighting. These spectacular attacks demonstrate that ISIS is capable of launching mass-casualty assaults simultaneously and on several fronts, in the largest operation since insurgents seized Anbar’s Ramadi and Fallujah in December 2013. The wave of attacks, which took place on 05 – 07 June, occurred as the next government is still in the process of formation, with no sign of compromise among the deeply divided parties and blocs which emerged after the 30 April Elections.

On 08 June, Prime Minister Nouri Al-Maliki called for the parliament to declare a state of emergency in Mosul, after insurgents overran a military base and freed hundreds of prisoners. On 09 June, Kurdish Peshmerga forces were reportedly deployed to Mosul to protect their populations and prevent ISIS from seizing more terrain in areas bordering Kurdistan. As upcoming ISF operations attempting to retake control of Mosul are expected in the next days, the civilian death toll is set to increase. Aside from the humanitarian aspect of the crisis, rising violence will further compromise the chances of a rapid government formation, as Maliki’s rivals are unlikely to back policies which continue to antagonise Sunni populations and allow ISIS to extend their territorial reach. The capture of Mosul ensures that the majority of militant resources will continue to be concentrated in northern governorates, as ISIS strengthen their position and the ISF counterattacks.

Most of violence was concentrated in northern provinces, with several car bomb detonations recorded in Salahuddin, Diyala and Kirkuk. On 08 June, a coordinated assault on the PUK headquarters in Jalawla district killed 14 and injured 20. On 09 June, some 150 people were injured when a car bomb exploded in Tuz. Despite these mass-casualty attacks, the most significant event consisted of the multi-front ISIS assault on Mosul and towns of Salahuddin. On June 05, ISIS fighters stormed the town of Samarra, briefly taking control of several neighbourhoods before being expelled by Iraqi forces. Meanwhile, militants deployed throughout Suleiman Beg, a town overrun by ISIS earlier this year, and destroyed several houses. On 06 June, a violent assault on Mosul which resulted in days of fighting with ISF forces killed over 100 people in and around the city. Mortar shells falling on the al-Tink area, west of Mosul, killed 40 civilians and ISF elements. On 10 June, militants were reportedly in control of the Mosul airport, local TV stations and the governor's offices. Militants also freed nearly 1000 prisoners as they stormed a military base. The capture of large portions of Mosul means that ISF operations will militants will be hard to dislodge. It also ensures that the focus of ISIS will remain located in the north over the next weeks. 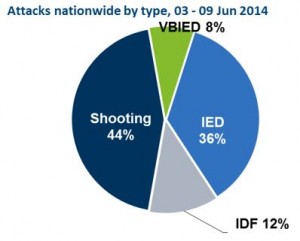 Despite a noticeable concentration of resources in the north, militants continued to hit Baghdad with series of car bomb attacks, coordinated with large-scale assaults conducted on 05 – 07 June elsewhere in the country. On 07 June, four VBIEDs detonated in sequence across the capital. The most significant incident occurred in the Shia-dominated district of Karadah, where a car bomb explosion killed ten civilians and injured 25 others. On 09 June, six civilians were killed and 22 others injured in two separate bombings in the capital. Meanwhile, intense fighting continued in Anbar province, with clashes erupting in the towns of Garma and Sichir, north of Fallujah and in the southern part of Ramadi, where gunmen stormed Anbar University and briefly took hostage some of the students and professors. Three guards were killed in the attack, with additional incidents consisting of VBIEDs and IEDs on bridges and checkpoints. As government resources are likely to become absorbed by the crisis in Mosul, insurgents could take advantage of the situation to seize terrain closer to Baghdad. Levels of violence are therefore expected to increase over the next weeks.

As previously assessed, and despite the car bomb detonations in Najaf and Dhi Qar last week on 02 June, the pattern of mass-casualty expeditionary attacks remains disrupted and violence levels across the south were consistent with previous averages. On 04 June, a VBIED killed seven civilians and injured 65 others in Hilla, while IEDs and small arms attacks caused additional casualties among ISF members and civilians. Outside Babil, Basra remained the most violent southern province, though reported incidents were mainly the product of intra-Shia violence. On 07 June, fighting between al-Gitran and Bani Saad clansmen resulted in one fatality, while other cases of tribal violence resulted from heightened tensions between Shia blocs in the aftermath of divisive elections. As militants remain focused on the north, with an intensification of efforts in Nineveh and Salahuddin, south-eastern provinces are expected to remain free from major attacks over the next weeks. Despite this trend however, the commemoration of the twelfth Imam’s birthday on 14 June could prompt attacks against Shia pilgrims on their way to Karbala, though violent incidents are likely to be concentrated in Baghdad and Babil. 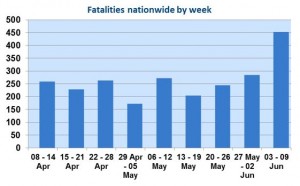