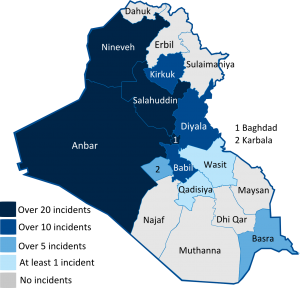 Amid elevated levels of violence accounting for nearly 300 fatalities, the reporting period was marked by ISIS advances across the North. Militant offensives in several districts held or contested by Peshmerga forces led to fierce clashes between ISIS and Kurdish elements in Sinjar district and areas around Mosul, causing tens of thousands to flee. As insurgents extend their reach to previously Kurdish-held territories, and therefore consolidate areas seized in June, the condition of minorities in Nineveh appears increasingly precarious. After expelling Christians and other ancient religious minorities from Mosul in July, there has been accounts of executions among the Yazidi community, a particular branch of Shia Islam, as Kurdish armed forces retreated further north. The deteriorating security situation has added considerable urgency to forming a new government which would have the legitimacy to broker deals with Sunni tribal communities ambivalent to the ISIS advance. On 01 August, Ayatollah Ali al-Sistani called on the country’s politicians to form a national unity government, while incumbent Prime Minister Nouri al-Maliki continues unsuccessfully to secure a third term, prolonging Iraq’s political deadlock. On 04 August, Maliki ordered his air force to assist Kurdish forces, as the latter prepare a counter-offensive on territories fallen to ISIS over the past days. The ISF has been relying heavily on airstrikes to contain the advance of Sunni militants in the North, though air support has so far largely failed to help regain territories. This decision could rather be political, as the next Prime Minister will likely need Kurdish support in parliament to secure his election. While the political sphere is expected to remain stagnant over the next weeks, most of the violence in the North should remain concentrated in Nineveh’s Sinjar district, central Salahuddin, eastern Anbar and northern Diyala.

On 03 August, following a 24 hour offensive which inflicted the first major defeat on Kurdish forces, ISIS insurgents captured Iraq’s biggest dam, an oilfield and three towns in Nineveh. The control of the electricity-generating Mosul Dam could give militants the ability to flood major cities and reinforce their grip over the region. At the time of writing, reports were still conflicting over the control of the dam, though its strategic significance guarantees that the area will remain contested. Militants apparently took advantage of a weaker military Kurdish apparatus in Sinjar, a district which had previously been spared the violence observed in other areas hosting a Kurdish presence, though intensifying clashes in its vicinity could have predicted such offensive. ISIS’s increasingly offensive posture against Kurdish forces follows a radicalisation towards minorities present in the Mosul area for centuries, with accounts of assassinations within the Christian and Yazidi communities. While ISIS continues to apply its strict ideology by forcing populations to convert and destroying holy shrines, the main hot spots of violence across the North continued to be located in areas around Samarra in Salahuddin, and northern districts of Diyala. Despite continued IED attacks inside Kirkuk, Peshmerga forces reinforced their positions in the province and declared a unilateral ceasefire in its southern edges, which continues to witness sporadic clashes with ISIS elements. 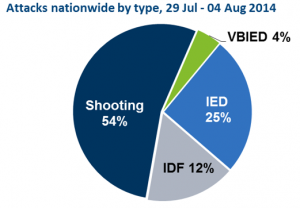 On 01 August, ISIS militants launched an attack on Haditha from three different sides, in a failed attempt to bypass the last line of defense between them and the Haditha Dam. Insurgent advances in Anbar continue to be hindered by the hostility of local tribes, which have sent fighters to reinforce the ranks of ISF units present in the area. The majority of violent incidents continue to be located in Fallujah and Ramadi, with airstrikes accounting for the majority of civilian casualties. Violence in Baghdad experienced a lull compared to previous reporting periods, owing to the ISIS surge in northern governorates. Car bombs remained below averages seen prior to the June advance, though the consolidation of ISIS positions in the northern governorates could eventually shift the focus of ISIS back to the capital. The deadliest incident occurred in the southeastern al-Ameen district, when a VBIED killed 11 civilians and injured 29 others. While ISIS cells are active across northern and central provinces, recent patterns have shown that Sunni militants currently lack the capability to operate with the same intensity on multiple fronts. As such the continued offensives in the North should ensure that levels of violence in Baghdad remain stagnant over the next reporting period.

This lull was also visible in Babil, where fewer incidents were reported compared to recent averages.  This trend confirms the strategy followed by ISIS, which uses operations in Babil as a means to draw ISF units away from the North and thereby consolidate their positions in Nineveh and Salahuddin. The threat of militant attacks in the South has decreased following the conclusion of Eid al-Fitr. Tribal fighting continues to occur predominantly in Basra, with the resurgence of Shia-nationalist sentiment and return of re-mobilised militias from the northern front likely to be destabilising in the longer term. Meanwhile, south-eastern provinces are expected to follow established patterns of violence. 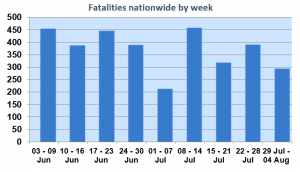