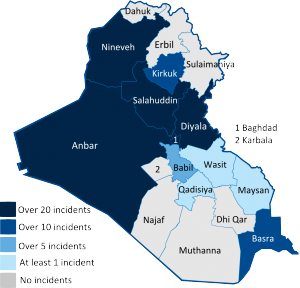 The fate of Abu Bakr al-Baghdadi, who may have been targeted in airstrikes conducted against an ISIS convoy in Mosul and a gathering of militants in the border town of al-Qaim in Anbar is unlikely to have dramatic effects on security dynamics in Iraq. If these reports were confirmed however, ISIS could decide to launch significant operations across the country, in a bid to signal the group are not halting their offensives. The progressive remobilisation of Shia militias, which are effectively in control of the security in some districts of the capital, have reignited fears that Iraq may slide into an all-out sectarian conflict once the threat posed by ISIS is removed. On 11 November, Prime Minister Haider al-Abadi announced that a greater role would be given to the Interior Ministry in securing the capital, as Baghdad continues to be confronted by mass-casualty car bomb attacks in its eastern Shia-dominated districts. The focal point of the government’s actions should remain centredcentered on Anbar, where the recent capture of territories has translated into under-reported public executions against members of anti-ISIS tribes. As this week’s violence resulted in at least 412 fatalities, general incident levels should remained aligned with previous patterns and mainly concern northern and central governorates.

Most of the operations conducted by the ISF assisted by air support continued to be focused on the north-western governorates, with major operations reported near Mosul and further south in Baiji. Iraqi military forces reached the centre of the city of Baiji in an effort to break ISIS’s siege of the country’s biggest refinery, triggering fierce clashes with militants. The fact that militants used a number of car bombs to target ISF defences built around the refinery is probably a tactic employed by ISIS to shift the focus of pro-government forces away from other fronts. Meanwhile, Kurdish forces and US-led coalition airstrikes targeted several ISIS positions near Mosul, allowing Peshmerga units to inch closer to Iraq’s second-biggest city. The gains recently made by the Kurds in Nineveh confirm that ISIS’s momentum in the country’s northern edges has been overturned, with militants adopting an increasingly defensive posture in areas pounded by airstrikes. In the north-eastern frontline, in Diyala, security forces continued to clash with militants in the north of Muqdadiyah, reportedly killing a number of ISIS senior commanders in Sadia.

While car bombs continued to hit civilian areas of Baghdad, government resources remained predominantly absorbed by the situation in Anbar. At least 39 people were killed and 119 others wounded in a wave of car bombs which struck Shia-majority districts of Baghdad, perpetuating a pattern of violence which has seen the capital targeted with an average of five VBIEDs per week. The recent killings perpetrated against the Albu Nimr tribe prompted Shia militiamen to join the battle in Anbar, where a joint force of anti-ISIS Sunni fighters and ISF forces are attempting to recapture Hit. The fact that Shia volunteers are now joining Anbari tribes in their fight against ISIS demonstrates the different currents which have emerged within Iraq’s Shia tribal landscape, with factions taking a more aggressive stance than others towards Sunni populations. The airstrike campaign, which has focused heavily on Anbar over the past days, targeted ISIS positions in the al-Qaim district, near the Syrian border. On 08 November, a gathering of senior ISIS leaders, possibly including Abu Bakr al-Baghdadi, was targeted and destroyed at least 40 vehicles. Further operations are likely to focus near Hit and south of Fallujah, where the ISF are attempting to advance towards Amiriyat al-Fallujah from Babil.

As Shia militias act increasingly independently of the central government, their presence has become more visible in the South. In Maysan, an Iranian-backed militia organised a military parade in the town of Amarra, in an apparent display of strength aimed at increasing their popularity in the area. As the ISIS threat subsides and the government rebuilds ties with disenfranchised Sunni communities, tribal groups and their affiliated militias could jostle for influence in the southern governorates. While the majority of remobilised Shia fighters are battling ISIS in the north and west of Iraq, tribal violence has witnessed a substantial uptick in Basra. However, these incidents are predominantly due to a more permissive security environment, and tensions are unlikely to build up to a large-scale confrontation in the short to medium term. 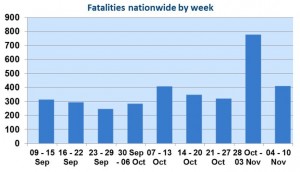