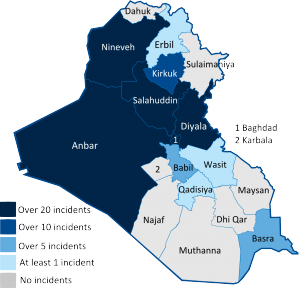 Following Prime Minister Haider al-Abadi’s decision to reshuffle senior security commanders, Deputy Interior Minister Adnan al-Asadi, an ally of former PM Nouri al-Maliki, was removed from his position. Since assuming office, Abadi has been seeking to clear key government positions from Maliki’s influence, which is effectively strengthening the Iranian-backed Badr Organisation and one of its prominent members Mohammed al-Ghaban, Iraq’s current Interior Minister. As the Iraqi government attempts to manage and overturn the ambivalence of their Sunni populations, the death sentence of former Sunni MP Ahmed al-Alwani, pronounced on 23 November, has the potential to inflame tensions in Anbar, where his arrest last year sparked the chain of events which eventually allowed ISIS to seize Fallujah. Despite high levels of violence and a continued freedom of movement in many areas of northern and western governorates, ISIS recorded a series of losses over the reporting period, consolidating a trend which saw the group retreating from Baiji last week. Following these setbacks, ISIS could choose to focus more heavily on Anbar, where insurgents have seized most of the corridor stretching from the Syrian border to Fallujah, and the lack of government supplies present the group with more opportunities.

While the most significant incidents continued to be reported in Diyala and Salahuddin, a rare car bomb blast in Erbil disrupted the stability which usually characterises Kurdistan. On 23 November, a force of Kurdish and Iraqi soldiers, supported by Shia fighters, recaptured the towns of Jalawla and Sadia in Diyala, and are now in the process of securing the zone and clearing the areas of IEDs. These gains follow successful operations in Salahuddin which enabled Iraqi forces to retake Baiji last week, in anticipation of a major ground assault on Tikrit. High-impact operations in Nineveh continued to consist of airstrikes targeting ISIS gatherings near Mosul, as insurgents continue to fail at challenging the Peshmerga forces in the province’s north-west. Meanwhile, a rare suicide attack in Erbil left five people dead and dozens of people wounded, after a car bomb aimed at targeting the citadel detonated after guards stopped the vehicle. This incident, which represents the first deadly attack of this kind to occur in Kurdistan since last year, underscores the presence of ISIS’s ‘sleeper’ cells in provinces which are normally spared the violence witnessed in the most restive governorates.

ISIS continues to seek control of Ramadi, while VBIED attacks in Baghdad witnessed a lull. ISIS fighters attacked a government complex in the heart of Ramadi, in a coordinated effort to seize full control of the city. The attack was launched from multiple axes and resulted in fierce clashes with the ISF, who eventually repelled the assault. Clashes are reportedly ongoing to the west of Ramadi. ISIS appears willing to reverse their setbacks in the North by striking gains against the fragile anti-ISIS coalition in Anbar, which currently lacks ammunition and Baghdad’s full support. ISIS is likely to capitalise on this weakness to sustain their assaults on major provincial districts. Meanwhile, the lull in VBIED attacks witnessed in the capital tends to show that ISIS’s most pressing priorities are currently located outside Baghdad. In light of current dynamics, clashes in Anbar and operations conducted further north should continue to absorb most of government resources.

Consistently high levels of lawlessness in Basra, which continue to translate in an increase in criminal acts, demonstrate the divisions existing between the various local tribal factions. Most of the disputes resulting in small-arms fire attacks or low-impact IEDs have indeed been opposing competing tribal members, and the continued focus of the ISF in the country’s North will continue to provide an environment conducive to tribal violence and criminality for financial gain, such as kidnappings. The continued involvement of Shia militias in the fight against ISIS guarantees that this violence remains low-impact and predominantly confined to Basra in the short-term, though an absence of government-backed negotiations will inevitably lead to an escalation in the longer term. 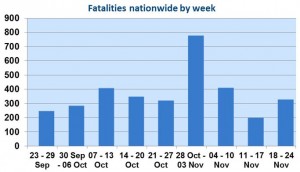