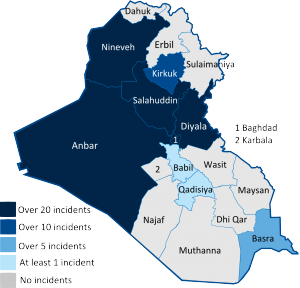 PM Abadi’s political manoeuvres continued to lead to a number of dismissals within key ministries. On 01 December, the Prime Minister retired 24 senior Interior Ministry officials as part of government restructuring. This decision comes as central authorities uncovered an estimated 50,000 ‘ghost soldiers’ on the military payroll, prompting the government to take steps towards tackling corruption and patronage. In another development detaching Abadi from his predecessor and current VP Nouri al-Maliki, Baghdad reached a deal on oil exports with Kurdistan, potentially ending years of disputes related to trade and budget. Under the new agreement, both regions would export through Iraq’s national oil company, SOMO, while the Kurds will keep 17% of Iraq’s budget expenditure and take a seat on SOMO’s board. As Iraq continues to be confronted by the threat posed by ISIS, rising violence has forced the country to work towards resolving long-lasting disputes and choose compromise over divisions on a number of issues. After suffering major territorial losses over the previous weeks, ISIS renewed its assaults in the North, in a probable bid to force a relocation of ISF resources away from the frontlines where insurgents have been compelled to abandon their positions, particularly in Diyala. This tactic should be sustained and lead to an increased in clashes reported in Salahuddin, where militant assaults on Baiji and Balad have been witnessed, and areas in the vicinity of Kirkuk.

Clearing operations continue in Diyala, while ISIS engage Peshmerga forces in a number of locations in Nineveh, Salahuddin and Kirkuk. On 26 November, Peshmerga forces recaptured the village of Tal Ward, between Kirkuk and Hawija, which had briefly fallen to militants as ISIS multiplies attempts at distracting Iraqi and Kurdish forces from other locations. Clashes also occurred in Baiji, where insurgents are still in control of the town’s outskirts. On 30 November, ISIS launched an attack on Balad, north of Baghdad, which was repelled by a force of ISF and Shia volunteers. Fighting was also reported between Peshmerga soldiers and militants near the Mosul dam, in a possible move to delay a planned Kurdish assault on Sinjar. Assaults, such as the one witnessed in Kirkuk which led Kurdish authorities to allocate reinforcements, are likely to be aimed at destabilising the conduct of ISF clearing operations, forced to rethink their priorities and organisation. This strategy is expected to be repeated over the next weeks, ensuring that direct clashes between ISIS and Iraqi forces continue to increase.

As previously assessed, the focus of ISIS on operations in the North and Anbar continued to translate into a decrease in levels of violence in Baghdad, with no car bombs reported. The fiercest clashes reported in Anbar continued to occur in the vicinity Ramadi, where ISIS have allocated most of their resources. Fighting was witnessed west of Anbar’s capital, in Huz district, as well as in districts near Hit. As Ramadi remains the focal point of both ISIS and the Iraqi army, ISF forces reportedly made advances east of the city, while airstrikes continue to target ISIS vehicles converging on the battlefield. ISIS’s continued freedom of movement in the area, despite the sending of reinforcements and ammunition from Baghdad, continued to translate in high-impact incidents. On 30 November, a VBIED detonated in the Sajariya area of Ramadi, injuring three ISF soldiers. Meanwhile, an increase in Shia militant activity in the capital translated into a number of incidents and further demonstrated the autonomy currently enjoyed by Shia brigades. On 25 November, a group of gunmen stormed a house in Sadr City, killing three individuals. Levels of violence in the capital are expected to remain below average over the next reporting period.

Amid levels of violence in line with previous averages, threat levels are set to increase as the festival of Arbaeen approaches and pilgrims are expected to start converging in Karbala. Basra continued to witness acts of criminality, while levels of violence in Babil continued to drop. The continued threat of militant penetration into southern provinces was highlighted by the clearing of four VBIEDs in Karbala. Despite the group’s intent to strike the South-East in the lead-up to the festival, the focus of ISIS on northern provinces should ensure that attacks remain low-impact. 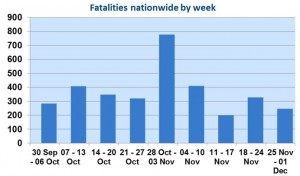