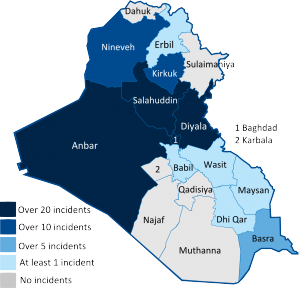 UAE airlines suspend flights to Baghdad international airport (BIAP) following small arms fire attack on passenger aircraft. At approximately 16:40 on Monday 26 January, at least four bullets were recorded to have struck a Fly Dubai Boeing 737-800 as it arrived on the runway at Baghdad airport, causing superficial damage to the plane’s fuselage as well as minor injuries to a number of passengers. Originally thought to have come from sniper positions within the vicinity of Abu Ghraib, subsequent announcements by the Ministry of Transport have confirmed the use of small arms machine gun fire (SAF) in the attack, believed to have emanated from the Ar Radwaniyah sub-district to the north-west of the terminal. At the time of writing, no clear motivation, or claims of responsibility for the incident by militant groups have been identified, though it should be recognised that with local militant groups increasing attacks by over 300% in the Abu Ghraib area prior to the shooting, Baghdad’s outer belts remain an extremely volatile operating area for both civilian and military personnel. Nationwide, ongoing Islamic State in Iraq and Al Sham (ISIS) movements in northern and central areas faced major challenges this week, as Peshmerga and anti-government ground forces reported substantial territorial gains in the Mosul, Baquba and Muqdadiyah areas.

Allied offensives reclaim key villages around Muqdadiyah, Diyala governorate amid accusations of ethnic cleansing against Sunni residents. Beginning on 23 January, the operations were conducted by a joint force of Iraqi army, police, Shia volunteer forces and tribal militias, in a four-pronged attack on the Mansuriyah sub-district of northern Diyala. At least 247 pro government fighters are believed to have been injured in the fighting, with ISIS supporters sustaining unspecified casualties before being forced to completely withdraw from the area over the following three days. While such successes are likely to lead towards further offensive in Tikrit and Kirkuk over the coming weeks, conflict with allied tribal groups has also surfaced in the course of the operations, with units of the unruly Shia “Badr Brigade” militia accused of destroying local houses and perpetrating a massacre of some 70 unarmed civilians, suspected of being Islamic State sympathisers in the Barwanah area. At present, official sources have yet to confirm or deny such reports, which have emerged alongside a growing number of shooting and revenge killings perpetrated by armed militias across the northern battlefields.

Major security operations are currently underway in southern Ramadi as ISF and tribal forces attempt to push back ISIS militants to strong points around the Euphrates River. As the major centre of fighting in Anbar for the fourth consecutive week, victory in Ramadi has been outlined as a key security objective for ISF divisions across the west, with heavy fighting in the Sjariya, Khaldiya and al Nasir districts to be expected over the coming days. Already curfews have been imposed across civilian-inhabited sections of the city, facilitating aggressive expansion into the ISIS-held Tamim neighbourhood on 26 January amid repeated counter attacks by insurgent forces. A rise in armed activity across Fallujah and Haditha was also noted over the reporting period, though with limited change to existing battle lines. Unable to break the stalemate in urban centres, militants have increasingly deployed VBIEDs and other heavy weapons to border positions around Rutbah, most likely in a bid to loosen Iraqi government control over the desert frontier and enable to transfer of fresh reserves and heavy armour from across Syria.

No substantial change occurred to security conditions across southern governorates, with violence primarily confined to small arms fire (SAF) incidents in the restive suburbs of Mahawl (Babil) and Basra city. In the case of the latter, sectarian tensions were stoked on 22 January when unidentified gunmen shot dead a Sunni imam and madrasa teacher as he cycled from the Abu al-Khasaib mosque after noon prayers. While attributed by local sources to Shia militias active in the territory, it is important to recognize that local violence and armed criminality have targeted people from across the religious and political spectrum in Basra, with shootings more often related to local feuds than wider political aims. Such reasons are likely to have represented a key motivation for a second major attack in the Zubayr area a day earlier, when criminals detonated an IED in front of a house belonging to a well-known employee of the Southern Oil Company. In this case the victim escaped unharmed with only minor damage caused to the house in question. 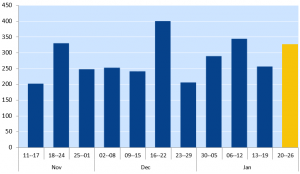