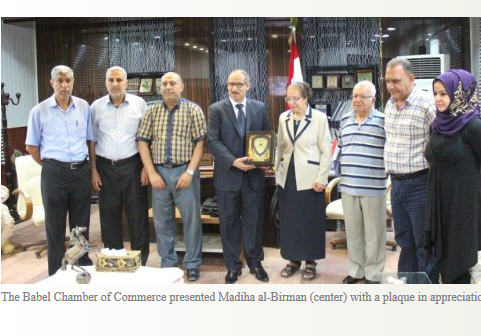 By Editor on 31st January 2015 in Iraq Education and Training News, Politics

We Are All Responsible For What Is Happening In Our Country, Says Donor of US$2 Million Iraqi School

Iraqi émigré, Madiha al-Birmani, is clearly a woman with attitude. She attended a boys-only school in her youth in Iraq, studied medicine in Britain and then moved to Scandinavia. Now she has donated millions to opening a girls’ school in her homeland. She talked to NIQASH about why Iraqi women are better than Iraqi men and the political situation in the country today.

Before she became a successful doctor in Europe, Iraqi woman Madiha al-Birmani was forced to attend an all-male school in Hilla, a large city in the province of Babel. She went there because at the time girls’ schools were not teaching the subjects she required for a career in medicine.

After graduating from medical school in Baghdad and working as a doctor in Iraq, al-Birmani eventually immigrated to Europe in the 1980s, working in Swedish and Norwegian hospitals until her retirement in 2009.

Last year a girls-only school for 600 students opened in Hilla, the result of around US$2 million worth of donations from al-Birmani. Her money also helped build classroom extensions at another school. She talked to NIQASH about the project, the status of Iraqi women in her hometown and overseas and how she feels about the situation in Iraq today.

NIQASH: In your book, you said that you were the only female doing science in a boys' high school. Is that part of why you later had the courage to travel to Britain to study medicine?

Madiha al-Birmani: I lived a unique and challenging experience at that time. It wasn't only challenging for me, but also for my family and for my father in particular, who allowed his young daughter to be the only female among a thousand male students. My father's encouragement and his support were decisive.