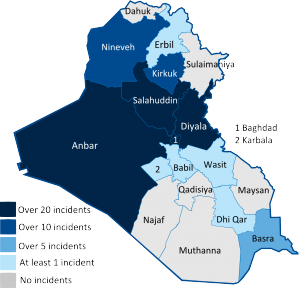 Jordanian air campaign in Syria occurs amid ongoing counter-ISIS offensive across Iraq, as militant activity is curtailed in northern and central conflict zones. While Jordan’s armed forces have substantially increased their military presence along Iraq’s south-western border following the killing of pilot Muath al-Kasasbeh by the Islamic State of Iraq and al Sham (ISIS), prospects of a direct military intervention in Iraq by the Kingdom itself remain slim, given the considerable cost in human life likely to be incurred in any such operation. Instead, the Iraqi cabinet this week has sought to expand its domestic military capabilities, submitting for parliamentary approval a draft bill for a new national guard, in a bid to empower and solidify the position the country’s Sunni anti-ISIS tribal forces. Under the plans, each governorate would be responsible for raising its own local defence forces, rather than the current system where often highly unpopular federal troops are deployed to maintain peace and order. With no further incidents recorded against civil aviation, following the reported small arms fire (SAF) incident against a passenger aircraft on 26 January, the security situation around Baghdad airport has remained stable, though as ever, an underlying challenge to all commercial operations in Iraq’s volatile central provinces remains.

The focus of ISF-ISIS confrontations has shifted once again to Baiji, with Iraqi armed forces now backed by the arrival of popular mobilization militias (PMUs) attempting to fully expel militants from outlying western territories. Areas experiencing increased volatility at present include the Muthanna facility south west of Samarra, Albu Ajii, south west of Baiji and the Seneya camp close to the country’s largest oil refinery, where double digit casualties on both sides were reported from 07 February onwards. Conspicuous by their absence have been the use of VBIED strikes in these clashes, suggesting that insurgent forces were either taken by surprise, or more likely have temporarily exhausted their supplies following the major assault on Kirkuk during the previous reporting period. In Kirkuk itself and the recently recaptured districts of northern Diyala, no major attacks against Peshmerga or milita-held positions were recorded, a fact largely attributable to a heavy coalition air campaign which over the course of several days from 03 February is reported to have destroyed a significant quantity of ISIS vehicles and militant staging posts between Hawija and Makhmour.

Baghdad lifts 12 year curfew as armed clashes reduce across Anbar and districts west of the capital. In Ramadi, ISF operations and reported ISIS confrontations fell by 25% this week, in a sign of a slowdown in operations launched on 26 January. Similar circumstances were also recorded in Fallujah and Abu Ghraib are likely to have occurred as a result of a shift of insurgent forces to the west, as the ISF prepare to liberate contested areas of Hit town. In neighbouring Haditha, insurgents employed stalling tactics along southern routes from the ISF-held city, detonating three separate VBIEDs, including a train cart of explosives along the commandeered Ana-Haditha railway track. In all instances the security forces were able to repel the attackers, with no significant shift in front lines identified. Of more significance were events in the capital this week, which on 07 February saw authorities lift a 12 year curfew on after-midnight travel, leading to large scale celebrations as well as a number of targeted SVEST strikes by militant groups seeking to undermine the transition. While the move is unlikely to lead to a substantial increase in militant bombings, given that major suicide bombings have historically targeted large civilian gatherings during daylight hours, the shift will undoubtedly add an additional strain to security agencies already dealing with the transition away from militia control in areas such as Kadhamiya, Mansour and Saydiya.

The risk of protest and other civil disturbances has increased across Basra and the Quran following renewed agitation by local residents, primarily associated with the improvement of employment opportunities. Since December 2014, public demonstrations have increased three-fold in the Basra area, among which have been a series of notable protests targeting the region’s large scale international firms. Most recently on 04 February 2015 some 300 individuals were reported to have gathered in front of a number of investment corporations in Qurna town demanding local jobs. While all such gatherings continue to be conducted peacefully, the failure of local government negotiators to satisfy local employment demands has meant that demonstrations, currently occurring at the rate of once every two weeks, will continue to pose an underlying disruption to secure transits within the Basra area. This comes amid a revival in tribal tensions across Qurna and the Qarmat Ali over the reporting period, with at least nine civilians either killed or wounded in armed clashes along the Basra-Amara road on 06 February 2015. 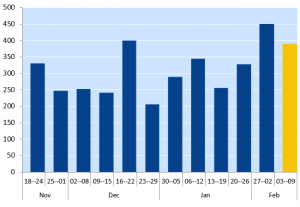