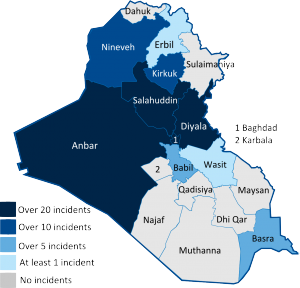 Financial challenges threaten to derail Baghdad-Erbil oil agreement as militants open new fronts in Anbar and the Northern provinces. High level negotiations on the implementation of the December 2014 Federal-Kurdistan Regional Government (KRG) budget ended in acrimony this week, as Kurdish officials denounced what they described as an attempt by the Baghdad authorities to renege on key financial terms of the deal. Central to this dispute has been the issue of federal budgetary support to the KRG. While both sides remain officially committed to the plan which aims to see the KRG export some 550,000 barrels per day through Iraq’s central marketing body, SOMO, controversy has arisen over an offer reportedly made by the Abadi administration to offer less than half of the agreed 17% of federal budget to the KRG due to severe constraints on national finances. This comes less than a month after Baghdad announced plans to borrow indirectly from the country’s foreign currency reserves in a sign of increasing financial insecurity for the government despite record high oil output. Whether this issue produces a new rift in Baghdad-Erbil relations will ultimately depend on the capability of the Iraqi authorities to moderate their stance and find a long term solution to the budget payment. KRG decision makers, already suspicious of Baghdad’s long term ambitions are not likely to move on this point given that the negotiation of a 17% rebate was one of the key terms for signing the December agreement in the first place, with PM Barzani this week stating that “if they don’t send the budget, we won’t send the oil.”

Attacks across Salahuddin more than double in the wake of fresh ISIS offensives in outlying rural areas. The heaviest fighting this week was reported in the Dijla and Mikishifa villages south of Tikrit, which on 12 February saw ISIS fighters overrun police positions, executing a number of officers and leading to an exodus of civilians to safer areas around Samarra town. While responding units from the Samarra Operations Command (SOC) were able to recapture a number of the villages a day later on 13 February, clashes remain ongoing across much of the central territories, with ISIS militant continuing to launch VBIED and other high-impact explosives against remote ISF positions. This shift in strategy away from major urban targets is likely to have come as a consequence of the failure of militants to seize control of Kirkuk over the past month, with ISIS cells now effectively barred from entering Tikrit or Samarra by the large numbers of defending PMU militiamen. Internal tensions are also expected to increase over the coming week in Tuz Khurmatu and Kirkuk city following the anticipated deployment of the Iranian-backed Hashdi al-Sha’abi militia into Peshmerga-held areas.

Fallujah and Hit districts experiencing a heightened threat of ISIS takeover, increasing threat to Sunni areas west of Baghdad. While still dominated by low level shootings and IED strikes, indirect fire attacks have emerged as a new challenge to the security environment in the capital’s outlying districts of Shula, Kadhamiya and Mansour, with at least 11 mortar and rocket strikes recorded from ISIS territory over the reporting period. In most cases, munitions including 12mm shells, are believed to be launched from truck-mounted artillery, and while still beyond the range of core infrastructure, have nonetheless caused significant damage and loss of life to affected residential areas. Disrupting the often tightly defended launch pads has also proven challenging for the ISF, with as many as 53 ISIS fighters killed in north-eastern Fallujah on 14 February when Iraq army brigades returned shell fire in the Garma area. Further west, the disputed Baghdadi sub district of Anbar re-emerged as the centre of conflict between tribal forces and ISIS militants, with insurgent forces once again pressing close to the coalition-reinforced Ain al Assad airbase after surrounding the juba residential area on 12 February. Despite claims from military sources that besieged compounds in Juba have been relieved, the situation affecting tribal units in Juba is assessed to remain critical, with at least 30 local recruits and 28 Iraqi police members still unaccounted following the seizure of allied facilities in Baghdadi on 15 February.

No substantial change to security conditions across the south occurred over the reporting period. As before, activity by ISIS and other extremist Sunni organizations remains limited in Iraq’s southern governorates at present, most likely as a consequence of a diversion of resources to the central and northern battlefields. This has in turn limited the potential for major VBIED or other high profile bombings in Shia religious spaces, although with large quantities of small arms proliferating among the region’s criminal and paramilitary entities, an underlying threat exists for international organizations. Recent attacks included the shooting of a local lawyer on 15 February as well as the injury of a woman four days earlier, both occurring in restive suburbs of Basra city. Spontaneous demonstrations are also continuing to occur at an increased frequency across southern governorates, with further protests against the Basra Southern Oil company recorded on 12 February and at the Qatia oil field in Dhi Qar three days later, amid low level disruption to traffic routes in Basra city. 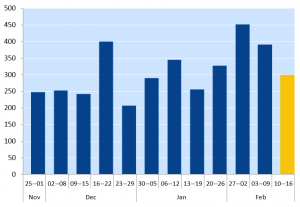