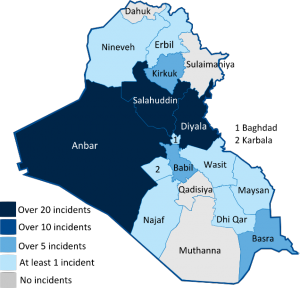 As total nationwide fatalities hit their highest point since October 2014, the Iraqi Government launched the largest anti-ISIS offensive to date, in an attempt to retake one of the Islamic State group’s mains strongholds; Tikrit. The operation will be an important test case for Iraq’s Shiite-led government as it tries to reassert authority over the divided country. After three days of heavy fighting, security forces are yet to enter the city, indicating that a long battle may lie ahead. Following last week’s announcement that the United States has committed to training a joint Arab-Kurdish force, including divisions of former Mosul residents, which will be deployed to liberate Iraq’s second city, US officials have stated that no timeline should be imposed on Iraqi forces planning an offensive to retake Mosul, as the operation will require elaborate preparations. It was previously announced that an eventual counter-offensive against ISIS in Mosul would likely come in April or May, prompting an angry response from the Iraqi Government.  Nationwide, heavy fighting continued in al-Baghdadi, as the Iraqi army, backed by international airstrikes, stepped up operations to retake the town and to clear the area of Juba, to the north. ISF sweeps also continued in Hit, Fallujah and Ramadi. A wave of bombings in central Baghdad and neighbouring districts contributed to an unstable security situation around the capital, with the number of reported incidents more than doubling from the previous week.

The battle for control of Tikrit intensified this week with the 27 February announcement of a new Iraqi offensive to retake the city. Iranian commanders are helping to co-ordinate the operation, including issuing directives from the village of Albu Rayash, 55km east of Tikrit, which was recaptured from the militants on 28 February. A force of about 30,000 troops and militia are understood to be attacking from multiple directions along number of different fronts, supported by air offensives from Iraqi fighter jets. Fierce clashes are now reported around Tikrit as soldiers attack ISIS positions in the centre of the town, with battles taking place in the suburb of al-Dour, the western al-Zuhur district, and in the northern area of Qadisiyah, where 8 Popular Mobilization members are reported to have died so far, with a further 42 injured. Iraqi security forces have yet to enter Tikrit and have been slowed by roadside bombs planted by ISIS, however they are believed to be amassing at Camp Speicher, west of Tikrit, awaiting orders to advance on the city. On 28 February ISF forces came under attack in Samarra, where they had gathered in preparation for the Tikrit operation, with the detonation of three VBIED’s and coordinated ISIS attacks from the west, which killed at least 14 people. Further east in Diyala province, 11 people were killed in a twin car bombing in the town of Balad Roz. ISF and Shiite militias have driven ISIS out of nearly all of Diyala province, however Saturday’s blasts showed that the militants are still capable of launching attacks in the area. Elsewhere in the region, Peshmerga forces repelled an attack by ISIS militants near the Dubz front lines, west of Kirkuk, on 28 February. ISIS intensified attacks in the Kirkuk region in late January but still seem unable to push back Peshmerga forces in the area, thanks to coordinated support from coalition airstrikes. Over 50 militants are also reported to have been killed in Shingal on 2 March as Peshmerga forces repelled a four-pronged attack on Kurdish positions in the city.

Several successive bomb attacks killed at least 7 and wounded 33 others across Baghdad yesterday. They included an explosion in al-Husayniyah, northern Baghdad, a bomb attack near a market place in al-Dawra district, and further explosions in al-Mashtal, central Baghdad and Abu Ghraib. On Saturday night a bomb also killed four people in western Baghdad, while another in the neighbourhood of Abu Dashir killed three people and wounded eight. Four mortar shells additionally hit homes in Sabaa al-Bour, just north of Baghdad, killing three people and wounding six. Heavy fighting continued in the Anbar town of al-Baghdadi over the reporting period, as the Iraqi army stepped up efforts to retake areas of the town from ISIS militants. International airstrikes and on the ground fighting are understood to have broken the prolonged ISIS siege on the strategically important area, which is just 7km away from the Ain al-Assad airbase where the US military is training thousands of Iraqi fighters. A further joint operation was launched on 2 March to clear the Juba area, north of al-Baghdadi. ISIS militants are reported to have executed dozens of youths in Juba before fleeing to Hit. ISF operations also continued in Fallujah, Hit and Ramadi, with over 120 militants reported to have been killed and numerous IED’s cleared in security sweeps. Further west, Iraqi border guards are reported to have repelled an attack by ISIS militants on the Iraqi-Saudi border on 28 February, killing several militants.

As before, activity by ISIS and other extremist Sunni organizations remains limited in Iraq’s southern governorates at present, most likely as a consequence of a diversion of resources to the central and northern battlefields. This has in turn limited the potential for major VBIED or other high profile bombings in Shia religious spaces, although with large quantities of small arms still proliferating among the region’s criminal and paramilitary entities, an underlying threat exists for international organizations. Although outbreaks of tribal violence have lessened since the launch of ISF disarmament operations in areas north of Basra at the start of February, there were a number of reported tribal clashes this week, including fighting in Qarmat Ali and south of Qurna town, indicating that underlying tribal differences remain unresolved. Small scale demonstrations also continued during the reporting period, in Nasiriya and Kit al-Hajaj on 28 February and 1 March respectively, but remained peaceful and contained. Additionally, there were three reports of kidnappings and shootings of non-Baswari Iraqi nationals, driving concerns of potential sectarian motivation among the local Basra population.