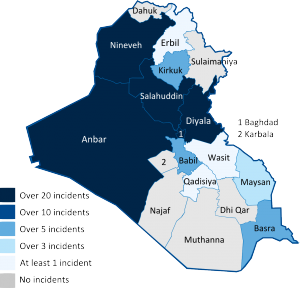 US involvement in Tikrit air campaign sparks discord within Shia PMU factions, as regional issues overshadow ongoing anti-ISIS offensive. Since Thursday 26 March, key players in Iraq’s Popular Mobilization Unit (PMU) alliance, including the Iranian-backed Badr Organization, Asaib al-Haq and Kitaib Hezbollah are understood to have withdrawn from the Tikrit theatre in protest at the coalition’s ongoing involvement in aerial bombing raids. While this does not appear to have significantly affected the pace of the offensive, and has in fact allowed the Iraqi Army to resume primary command on the ground, longer term successes against ISIS are likely to depend upon the manpower that the PMUs have provided up to now. Efforts by Prime Minister Abadi to renegotiate the return of these units (likely to depend upon the temporary suspension of US air activity in Tikrit) have also occurred amid increased sectarian tensions in the region, with GCC intervention against Houthi rebels in Yemen already sparking a series of pledges by smaller militia groups to support their Shia counterparts in the Arabian peninsula as they did during the Syrian civil war. With the majority of violent incidents confined to the battlegrounds of Salahuddin, Nineveh and Anbar this week, conditions in Erbil and the KRG cities (excluding Kirkuk) remained stable, with Peshmerga operations limited to frontline positions around Gwer and Sinjar town.

US aerial bombardment assists further advances into Tikrit as Peshmerga forces maintain defence against ISIS counter-attacks in Sinjar and Mosul. In total at least 39 airstrikes are reported to have occurred against ISIS targets in the city, with the scale of air raids increasing significantly from 26 March as US and coalition warplanes joined the Iraqi Air Force (IAF) to participate in coordinated operations. Under the cover of air support, ground forces then proceeded to enter Tikrit from three directions on the evening of the 26th, clearing houses and engaging militant checkpoints in a gradual advance over the next four days. According to official reports, some 137 neighbourhoods and districts of the city have now been cleared, largely in southern sections of Tikrit which on Monday 30 March witnessed Iraqi Army divisions raise the national flag over Tikrit hospital, approximately 2km from the city centre. Underpinning such gains has been a slow and methodical clearance of occupied buildings, which to date has uncovered more than 300 IEDs across the town and is likely to stall any rapid conclusion to the siege over the coming weeks. Unable to effectively flank the combined ground troops in central Salahuddin (an attempt by ISIS to recapture the Alas oilfields in NE Tikrit was foiled on Monday), militant units continued to harry Peshmerga positions adjacent to Sinjar town, mounting multi-pronged attacks on the Dohula Yazidi complex and outlying checkpoints in the face of ongoing coalition airstrikes.

Conflict intensifies across Ramadi-Fallujah frontier as ISF continue to push back ISIS rocket positions, despite heavy resistance from militant groups. As reported in last week’s Iraqi update, the town of Karma, approximately 8km north-east of Fallujah remains the focus of ISF operations, with over 136 militant gunmen reported to have been killed between 24 and 27 March in protracted clashes east of the settlement. In response, ISIS affiliates have re-directed heavy VBIED assets to the Karma frontline and against ISF positions south of Fallujah, an indication of the level of vulnerability that militant assets are now under in the wake of the Iraqi army (IA) deployments. Despite heavy casualties among IA recruits however, the primary objective of the operation (that of curbing the missile threat to Baghdad) appears to have been met. Only one mortar strike was recorded in Baghdad governorate this week, a marked contrast from the situation one month ago when militant rockets repeatedly targeted Baghdad’s outlying Shula and Dour areas. ISF deployments also acted as an effective deterrent to VBIEDs entering from the Husseiniya and Tarmiya districts to the far north of the capital, though as before the threat of small arms fire and sporadic car bombings remains extant for north-eastern districts of the city.

IED threat resurfaces in former-ISIS supply zones around Babil, amid sporadic violence and SAF risks in the Midaina-Qurna area. Located close to the now ISF-held summer conflict sites of Latifiyah and Mahmudiya, northern Babil has seen a notable increase in the scale and frequency of militant attacks over the past two weeks, largely in the form of concealed explosives. While in most cases these have not resulted in casualties and are likely to be the product of a number of small remaining cells, at least one ISF officer is known to have died this week when an IED detonated in the Abid Wais area of Jurf Al Sakhar. At present, such cells are not believed to possess the manpower or military capabilities to challenge ISF control, though with ISF raids continuing to unearth large quantities of explosives on a weekly basis, the potential for high profile bombings (as witnessed in the twin VBIEDs attacks on 18 March) remains. An underlying threat of small arms fire (SAF) on commercial routes in northern Midaina (Basra governorate) has also emerged this week, following the third such attack against a PSC convoy since 08 January 2015. Unemployment issues, coupled with a wider increase in tribal volatility and armed conflict are likely to be the primary causes these attacks, although other explanations cannot be ruled out.