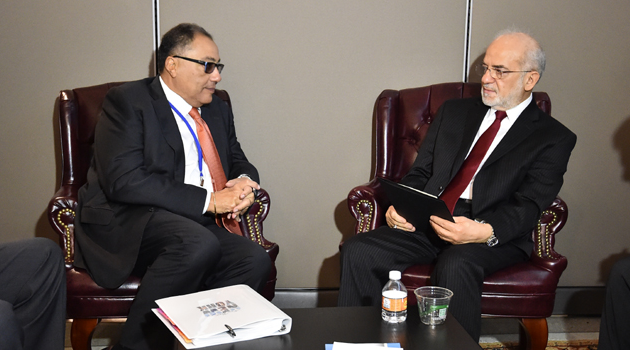 They discussed the World Bank work mechanism and the support that the bank can contribute to reduce the crisis of decline in oil prices and its impact on the development in Iraq.

"Iraq is passing through exceptional circumstances due to being swept by corruption waves, and today emerged the crisis of the decline in oil prices, beside, the cumulative expenditure during the term of the toppled regime who indebted the country."

The minister referred that Iraq is benefiting from internal sources, hoping to provide every possible measure to assist Iraq.

"Today Iraq is offering Iraqis and its money in the war against the terrorist gangs of Da'esh, thus, we request you to look at Iraq regarding its sacrifices. Da'esh members in Iraq are from more than 100 states, and we are fighting on behalf of the whole world. If Iraq bears the direct responsibility of defending its territories and the whole world, then it needs the assistance and support of the international community. We hope that you put this fact into your consideration, and we will not hesitate in supporting the World Bank," his Excellency asserted.

Dr. Al-Jaafari revealed the work of the Iraqi government in the rehabilitation of the devastated cities thus,"we request a project from you to assist Iraq and to be flexible with us."

While, Mr. Hafez asserted that the World Bank highlights assisting Iraq and does everything possible to find a way out of this crisis, saying:

"We seek to increase support for Iraq. The World Bank is working with Ministry of Finance to disburse a one billion loan to Iraq and this is not an easy process, however, we are trying to provide this amount before the end of 2015."