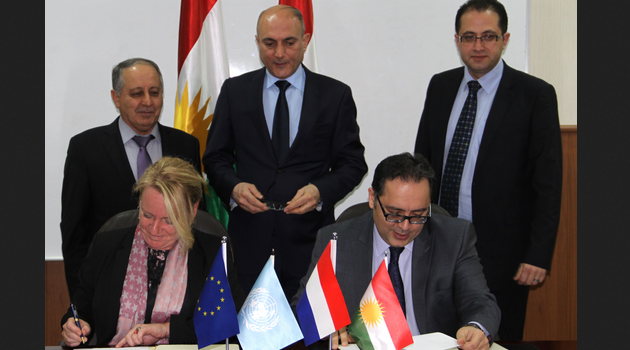 By Editor on 17th February 2017 in Construction & Engineering In Iraq, Security

The Kingdom of the Netherlands is contributing nearly US$270,000 (€250,000) towards the implementation of the Economic Reform Roadmap, developed by the World Bank in cooperation with the Ministry of Planning of the Kurdistan Region of Iraq (KR-I).

The contribution is made under the Funding Facility for Economic Reform (FFER KR-I), jointly launched by the Ministry of Planning and the United Nations Development Programme (UNDP) late September 2016.

Through the FFER, UNDP will support the implementation of the Economic Reform Roadmap that addresses key economic challenges in the Kurdistan Region and invigorates the reform agenda, with special emphasis on transforming and diversifying the economy and advancing the role of private sector.

“There is a simple premise underlying this Economic Reform Roadmap that the Kurdistan Region of Iraq can and will have a better future if we work together to enable it. The process of adapting our economy to prepare for a better future is outlined in this economic reform roadmap. We will implement important reforms that will allow for fiscal adjustment to move away from oil dependency, whilst also protecting the poor from the impacts of fewer subsidies.

"We need to promote the private sector and attract foreign investment if we are to prepare for a larger, more productive work force. We must make it easier to start, run, and close a business.”

Consul General of the Kingdom of the Netherlands in Erbil, Ms. Janet Alberda, said:

“'The Kurdistan Region faces many challenges, and building a sustainable transparent economy and reforming the public sector in such a way that facilitates the economy to flourish rather than to uphold is a next but crucial undertaking for the region to develop into a sustainable economy: this is good for its citizens, building trust, and good for its international partners.

"The Netherlands government provides many types of support to the Kurdistan Region, militarily, humanitarian and stabilization activities, which contributes to the increase of our good relations and interest in engaging and building a diverse economy and transforming the region into a better future.

"I look forward to good and open discussions with all relevant stakeholders on this Economic Reform Roadmap, and hope this roadmap will also provide a larger platform for discussions with the public on the necessary steps to take.”

“The Netherlands contribution to the FFER KR-I will help the Kurdistan Region to further address the economic crisis through prioritized interventions that can have real impact on people’s lives. Additionally, the implementation of the Kurdistan Regional Government’s (KRG) reform plan will be supported to remain on track. We are very glad to partner closely with our World Bank colleagues on this important initiative.”

Working with a wide range of national and international partners, including the World Bank, the FFER KR-I will mobilize expertise to support the implementation of top priority reform initiatives under the leadership of the KRG’s Ministry of Planning.

One Response to Netherlands supports Reforms in Iraqi Kurdistan