By Editor on 6th June 2019 in Ahmed Tabaqchali, Investment

The market finally woke up from its multi-month slumber, increasing by +14.7% for the month as measured by the Rabee Securities RSISUSD Index, in the process turning the year’s loss of -11.8% as the end of April into a gain of +1.2%.

The market’s turnover, while promising relative to the recent past, is still low relative to the last five years since the market’s peak. While, the average daily turnover increased +83% from April’s dismal levels, yet it is only about +11% above the average of the last year, which in turn was a low turnover year, as can be seen from the chart below. 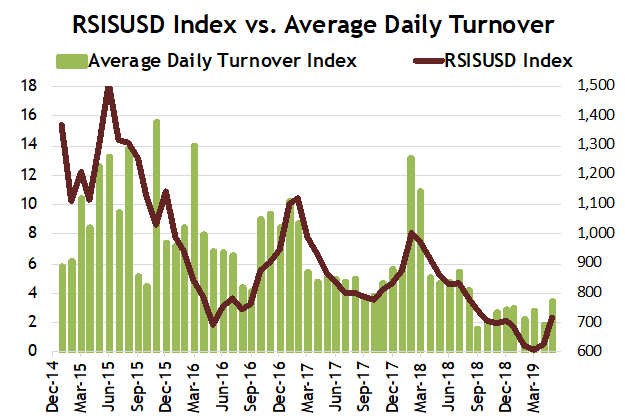 However, within the relatively low turnover, the market saw a return of its animal spirts in the form of a stunning rally in the Bank of Baghdad (BBOB) which was up +62.5% for the month.  Other leading banks rose such as the National Bank of Iraq (BNOI) +31.0%, Mansour Bank (BMNS) +20.0%, and Commercial Bank of Iraq (BCOI) +10.0%. Other stocks joined the rally with telecom operator Asiacell (TASC) +14.6% and Pepsi bottler Baghdad Soft Drinks (IBSD) +7.0%. Part of the catalyst for the banking sector’s rise was the end of foreign selling as covered here in the last few months, plus the emergence of modest foreign inflows in a number of leading banks such as BBOB and BMNS. The inflows were small, as can be seen from below, nevertheless the combined impacts of increasing foreign inflows vs. decreasing foreign outflows had an oversized positive influence. 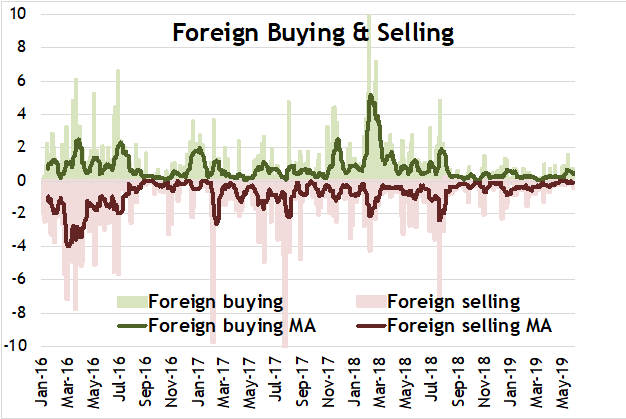 However, the local buying was driven by more than just foreign inflows. BBOB reported earnings figures for the first quarter (Q1) of 2019, which were mostly in-line with the bank’s 2018 numbers (covered last month) and still pointing to the potential for a gradual recovery in the sector. Yet, the focus of local attention was Q1’s net profit equalling about 72% of 2018’s net profit which led to hopes that the bank would distribute dividends unlike last year. Last year’s decision not distribute dividends, as sound financially as it was, soured the local mood on the stock, which was made worse by the same locals absorbing massive amounts of foreign selling as covered here in August 2018. That souring led to a long spell of continuous price declines for BBOB, dragging the sector with it, which seems to have come to an end this month. While, the conditions are in place for the sector to recover, yet it is still too early in the year to judge the likelihood of the bank distributing dividends, especially given the size of its non-performing loans (NPL’s) and the potential need for provisions.  Rabee Securities reports that BBOB’s NPL’s stood at 81.6% of gross loans at the end of Q1/2019, but it should be pointed out that BBOB has been aggressively shrinking its loan book over the last few years making a bad ratio much worse.

Meanwhile, the latest data from the Central Bank of Iraq (CBI) lend support to the early leading indicators of the return to liquidity, discussed here over the last few months. In particular, by the end of the third week of April, the IQD Current Account component of banks’ reserves with the CBI (a key component of the monetary base M0, and a function of customer deposits with banks) showed increased acceleration from the prior report (chart below), arguing for continued future growth in M0 and ultimately broad money M2 (a proxy for economic growth). 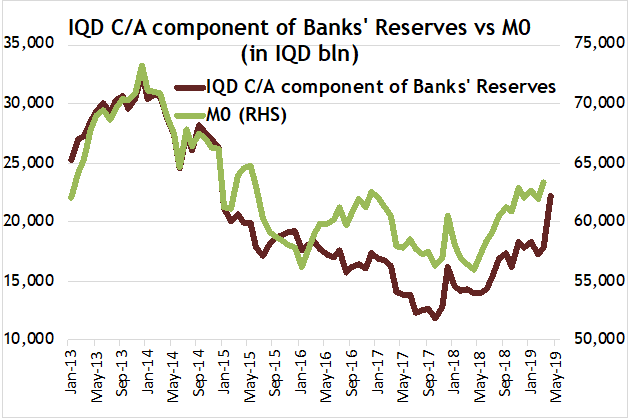 (Note: M0 as of Mar, IQD C/A component of bank’s reserves as end of third week of Apr)

The same CBI update, however, slightly lowered earlier reported figures for M0 for March, and M2 for January, but provided a slightly higher figure for M2 in February than estimated here. Together these necessitated a lowering of the estimates for M2 multiplier figures for March made here. The upshot is the estimated M2 year over year growth in March is now about +8.3% and not about +10.1% as reported last month (chart below). Continued strength in oil exports and higher oil prices in April and May, led to more growth in government revenues, which should continue to feed into increased liquidity in the economy. 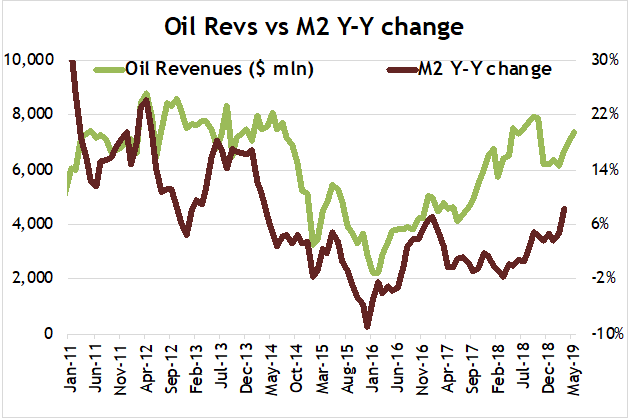 After, what seems like forever, it’s looking increasingly likely that year-over-year growth in M2 is finally tracking increasing oil revenues, however, more data points are needed before this short-term trend can become sustainable. Especially, that it’s unlikely that future data will show the same acceleration seen so far, and revisions to CBI data could lower reported figures for M0 and M2. However, the signs continue to point to increased liquidity and down the road an economic pickup. This is mostly, due to the central role of the government’s spending on the non-oil economy- the lack of which over the last years goes a long towards explaining the divergence of M2 from oil revenues. This was particularly so because of the political paralysis before, during, and after the May 2018 parliamentary elections, resulting in a government inaction that would have ended in March as the 2019 budget was only passed into law in late February.

The silver lining of the lack of government spending has been the steady growth in the budget surplus to an estimated 26-month cumulative surplus of USD 25.8 bln by end of February. The 2019 budget’s non-oil investment programme at about USD 12.5 bln is equivalent to about a 7.5% stimulus to the estimated non-oil GDP for 2019. While it is highly unlikely that this would be immediately spent, yet the spending should start with a trickle in the following months but grow as investment spending gets underway and ultimately would lead to a sustained economic recovery.

Nowhere is this dynamic more pronounced than in the Kurdistan Region of Iraq (KRI) that experienced a much sharper boom and bust cycle than the country as whole. The KRI’s prosperity came to an end in early 2014 following disputes, over the KRI’s independent oil exports, between the federal Government of Iraq (GoI) and the semi-autonomous region’s government (the Kurdistan Regional Government (KRG)). The disputes led to the GoI cutting the KRI’s share of the federal budget, which the KRG could not cover with its independent oil exports especially as oil prices collapsed in the wake of the ISIS conflict. This led to sharp cuts in the KRG’s spending on public employee salaries and government spending on investments and infrastructure. The cuts were made worse by the proximity to the conflict as business spending, trade flows and other economic activity came to a standstill. The upshot is the KRI’s non-oil GDP would have contracted much more sharply than that of the country’s non-oil GDP contractions of -3.9%, -9.6% and -8.1% for 2014, 2015 and 2016 respectively; nor would it have stabilised in 2017 as the country’s non-oil GDP did.

These negative developments, came to an end in early 2018, as the GoI resumed partial payments to the KRI from its share of the federal budget, which increased meaningfully in March 2019 as the GoI began to implement the 2019 federal budget (the budget as mentioned earlier came into law in February, and was an expansionary budget). Coupled with increasing independent KRI oil exports and higher oil prices, the KRG resumed full public employee salary payments and even started making payments to contractors that were stopped during the crisis. The effects on the region’s economy, while too early to report on, should be an amplified recovery of that of the country as a whole.

A glimpse into that amplified effect, can be seen in the 2018 annual report for the KRI’s strongest bank, Kurdistan International Islamic Bank (BKUI). While, the bank’s earnings were down -82.9% year-over-year in 2018, vs. year-over-year changes of -11.7% and +11.2% in 2017 and 2016 respectively. The 2018’s earnings decline was due to BKUI’s dependence on FX margins to sustain its income during the contraction in economic activity of the prior years, but the collapse in FX margins witnessed in 2018 brought that to an end. Yet, the main feature to note was the year-over-year growth in customer deposits (consumers, businesses and government) of +86.2 % in 2018 following multi-year declines. Within that, consumer and business deposits grew +56.0% pointing to the improving financial health of the KRI’s consumers and businesses, implying a future potential pick-up in economic activity as a result of this improved health.

The continued signs of economic recovery, still mixed as they are in this early stage, continue to underscore the opportunity to acquire attractive assets that have yet to discount a sustainable economic recovery. On the other hand, the market’s strong recovery in May on low turnover continues to suggest that a long consolidation period and a significant recovery in turnover are needed before this recovery can become sustainable.