By Editor on 4th May 2019 in Ahmed Tabaqchali, Investment

The market, as measured by the Rabee Securities RSISUSD Index, increased by +2.5% in April, bringing the YTD decline to -11.8%. Average daily turnover, excluding block transactions, declined -32% from the prior month, and at 60% of the average turnover for the last 12 months, is the second lowest for the period. Foreign selling, the cause of the last few weeks’ declines, seems to have exhausted itself (chart below) and in the process prices lifted higher. 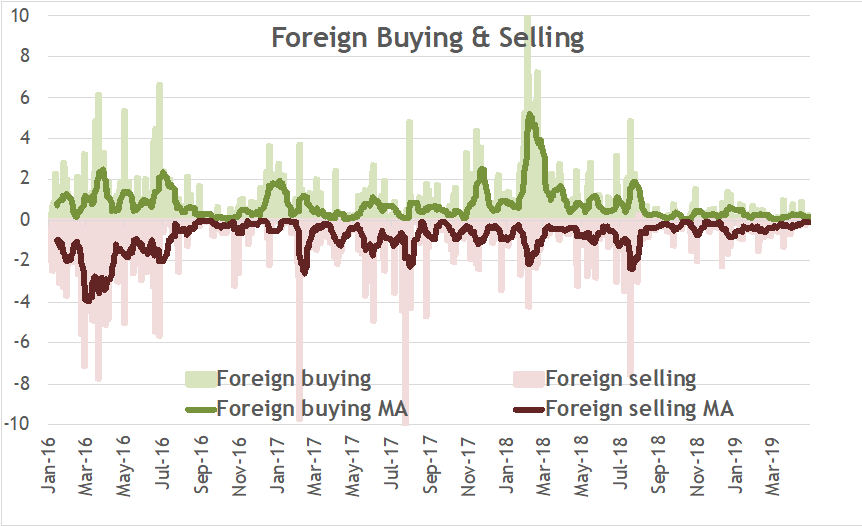 The early signs of the return of the liquidity to the real economy, reported here over the last few months, are becoming more convincing as the healing effects of increasing oil revenues are continuing to filter down into the broader economy. The continued recovery in broad money, i.e. M2 as a proxy for economic activity, is adding to this conviction due to its sensitivity to oil revenues (chart below)- given the central role of government’s spending on non-oil economic activity.

Driving this recovery in M2 has been the growth of monetary base, or M0, which in turn has been based on the growth in one its two main components “Iraqi Dinar (IQD) current account (C/A) component of banks’ reserves with the Central Bank of Iraq (CBI)” as can be seen in the chart below. The recovery of this component of M0 is a direct result of the growth of customer deposits (consumers, businesses and government) held with banks.

(Note: M0 as of Mar, IQD C/A component of bank’s reserves as of late Apr)

The estimated increase in M2 (prior chart) for March is based on recent M2/M0 multiplier figures and actual increases in M0 for the month. Persistent growth as of late April in IQD Current Account component of banks’ reserves with the CBI (a function of sustained growth in customer deposits with banks) is an early indicator for a continued recovery of M0 and hence in M2 in April (above chart). However, more data over the next few months is needed to establish if this trend is sustainable.

Supporting this growth in customers deposits are the 2018 results for the Bank of Baghdad (BBOB) which showed the first year-over-year growth in customer deposits following their peak in 2014. While BBOB’s year-over-year deposit growth at +5.2% is a far cry from the +25.8% growth reported by the Bank of Mansour (BMN), never-the-less, it was a function of corporate customers deposit growth. Moreover, BBOB’s provision expenses decreased contributing to an overall decline in total provisions (ex-income tax) of -2.3%. Combined they indicates that the macro forces which contributed to BMNS’s recovery, as discussed last month, are spreading to the sector as a whole and should therefore create the conditions for a recovery in the sector.

However, BBOB doesn’t enjoy the same financial strength as BMNS, which is a function of BBOB’s heady expansion during the boom years up to 2014, which among other things resulted in a large loan book relative to other banks, and hence exposure to riskier loans. Growth for BBOB took a back seat while management’s focus over the last few years was on addressing the company specific issues and structural weaknesses that were exposed by the pains of 2014-2017, including the crush in FX margins witnessed in 2018. This can be seen through the other metrics for BBOB in that while its assets and equity increased by +2.1% and +0.2% respectively in 2018 over 2017, its loan book and interest income declined by -4.7% and -38.0% respectively. The decline in its interest income was made worse by the decline in interest earned from government bonds and deposits with the CBI. BBOB’s challenges during the years of contraction were explored here in August.

Finally, mobile operator AsiaCell (TASC) leverage to the economic recovery was confirmed by its continued confidence in its future outlook with a distribution of a 12% dividend. This comes on the back of last year’s 12% dividend and the prior year’s 14% dividend.

The continued signs of economic recovery, mixed as they are in as this early stage, underscore the opportunity to acquire attractive assets that have yet to discount a sustainable economic recovery. On the other hand, the market’s recovery in April on low turnover suggest that a long consolidation and a significant recovery in turnover are needed before it can embark on the next move.