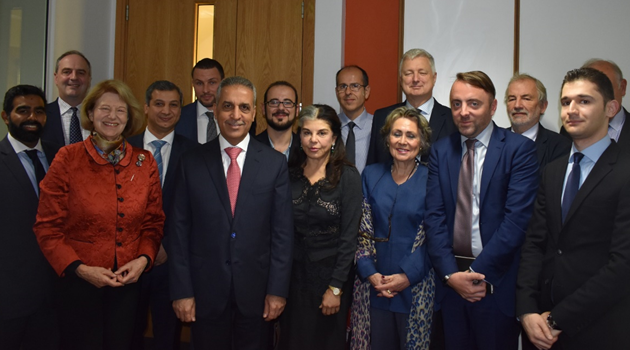 On Tuesday 1st October the Iraq Britain Business Council (IBBC) was pleased to host a roundtable discussion chaired by IBBC President Baroness Nicholson with His Excellency, Chief Justice Faiq Zidan, who was visiting the United Kingdom as guest of the Foreign and Commonwealth Office.

Chief Justice Zidan introduced himself and summarised his career, which began in 1991 as a lawyer in Baghdad. He was appointed as a judge in Baghdad’s Civil Courts and Criminal Courts in 1999 and then Chief of the Central Investigative Court responsible for Combating Terrorism and Important Crimes in 2005. In 2012, Faiq was appointed to the Federal Court of Cassation as Vice-Chief in 2014 and in 2016 as Chief, a position he still holds today. He was appointed President of the Supreme Judicial Council in January 2017.

Christophe Michels, managing director of IBBC, gave a summary of the history of IBBC in Iraq, the make-up of its current membership and the many events and activities currently being organised in Iraq, Dubai and the UK.

Members reported on current legal and judicial challenges they face when operating in Iraq. His Excellency confirmed he was familiar with many of these issues and undertook to review them on his return to Iraq. He said he would be particularly interested in any legal or judicial interpretations that could discourage foreign investment.

Chief Justice Zidan further encouraged IBBC and its members to organise more encounters with Judges from Iraq and to also increase its exchanges with the Iraqi Parliament, a suggestion much welcomed by the IBBC management and members present.

One Response to Iraqi Chief Justice to examine Barriers to Investment