By Editor on 7th April 2020 in Ahmed Tabaqchali, Investment

The crash in oil prices, brought on by the oil price war between Russia and Saudi Arabia, and the collapse in consumption due to COVID-19, seems like the perfect storm to hit Iraq given its vulnerabilities to such external shocks.

Though, this is not the first perfect storm to hit it. The last one which was arguably more perfect than the current one took place in the summer of 2014 when ISIS took over a third of the country, threatening its imminent break-up, and for good measure oil prices crashed.

As in 2014, the fall in oil prices poses serious threats to Iraq's oil-dependent economy, but the current storm hits a very different Iraq from that of 2014 - especially changed this time is its equity market. Then, the equity market was at the end of a multi-year bull market that, as measured by the Rabee Securities RSISX USD Index (RSISUSD), had almost doubled by early 2014 from the levels of 2010.

Comparatively, now the equity market is at the end of a multi-year bear market that saw it decline 71% from the 2014 peak. Fuelling the 2014 bull market were foreign investor inflows and the government's multi-year investment spending program which boosted the economy and domestic liquidity. The opposite is true in the current bear market with most foreigners having withdrawn from the market and the government's investment spending having been practically non-existent for a number of years. 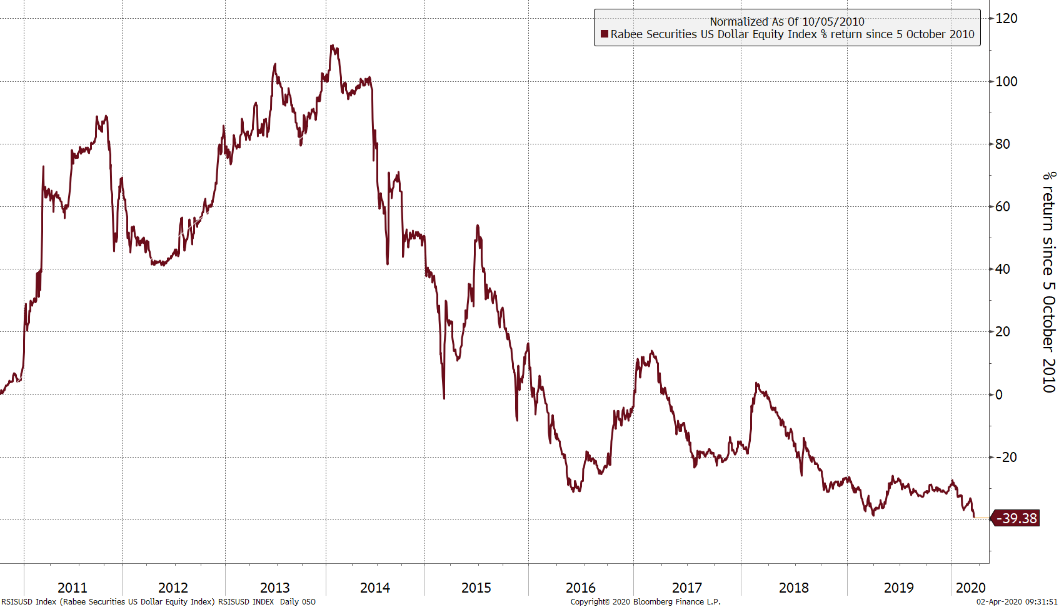 The significant drop in oil revenues will force the government to sharply curtail expenditures in the same way that it did in 2014-2016, with negative consequences for the economy, yet unlike then the cuts will not be magnified by the need to shift resources to the sharply increasing cost of the ISIS conflict. The combination of the different profiles of investment spending and expenditures have vastly different implications for both the economy and equity market.

In 2014-2016 the dramatic cuts to investment spending and diversion of resources towards the war effort led to year-over-year contractions in non-oil gdp of 3.9% and 14.4% in 2014 and 2015 respectively. The severity of the drop was such that the small bounce of 1.3% in 2016 was followed by a 0.6% drop in 2017. The multiplier effect of these contractions negatively impacted corporate earnings and ultimately led to the equity market's multi-year decline.

Today's different circumstances mean that the non-oil economy will not face the same severe double whammy as then, and as such the contractions will be of a different magnitude. It will nevertheless be negatively impacted by the effects from the COVID-19 lockdown far more than any cuts to the government's investment spending. While every sector of the economy will feel the effects of the lockdown, the informal sector which is dominated by retail and hospitality and which accounts for the bulk of private sector economic activity will be particularly hard hit. Whereas, these effects on the equity market will be through a few sectors that dominate the market, consisting of banking, telecoms and consumers staples.

The banking sector was hurt the most between 2014-2016 as the cuts to the government's investment spending were disastrous for private sector businesses at the receiving end of the cuts, whose finances deteriorated. This in turn affected the quality of bank loans as these businesses accounted for the bulk of bank lending. Consequently, the banks' earnings suffered from the increasing non-performing loans (NPL's) coupled with negative loan growth, as well as losing funding sources due to negative deposit growth. The scale of the effects on private sector businesses from any future cuts by the government ought be smaller this time around and should not lead to the same negative effects for the banking sector. However, it would be reasonable to assume that the sector's tentative recovery will be on hold, while any reversal would be limited given the nascent recovery prior to the COVID-19 shock and the sector's limited exposure to the informal economy. With the sector contributing the most to the market's 71% decline from the 2014 peak, it's difficult to see how bank stock prices can decline much further in response to these developments.

Other reasonable assumptions that can be made are that telecom stocks could benefit from the increased need for broadband induced by the lockdown, while any moderation in consumption for soft drinks - whose local bottler accounts for the bulk of the consumer staples sector market capitalization in the equity market - should be limited. These are very early thoughts and much more data, on the economy and company specific, are needed before any meaningful analysis can be made. However, such data and analysis in the short term will play second fiddle to shifting expectations on the future direction of oil prices.

Forecasting the direction of oil prices, especially at critical junctures, is fraught with uncertainty, as subsequent prices have made a mockery of all predictions throughout recent history: from those calling for ever higher prices when "peak oil" was the consensus thinking, to those calling for ever lower prices when "lower for longer" became the consensus. However, analysing the supply-demand for oil, while equally fraught with uncertainty, it is possible to analyse a few broad trends to help frame expectations for the general direction of prices.

The effects of the lockdowns related to COVID-19 have been profound on the global demand for oil given that about 60% of consumption comes from transportation. The first contraction in demand was seen when China went into lockdown in January and expanded as the rest of the world followed suit in March. Current expectations call for a decline in April of up to 20 million barrels per day (mbbl/d) from initial world oil demand estimates of 101mbbl/d.

The known nature of the virus precludes a return to full normalcy when global lockdowns are expected to ease from mid-summer onwards. Combined with the unknown nature of the new normal as the world learns to deal with and ultimately contain the virus, the return to a pre-virus oil demand picture is unlikely within the next 12 months. But, in six to nine months demand for oil should recover from the extreme lows of April and trend upwards to a small drop from base-line demand by year end, as suggested by the chart below. 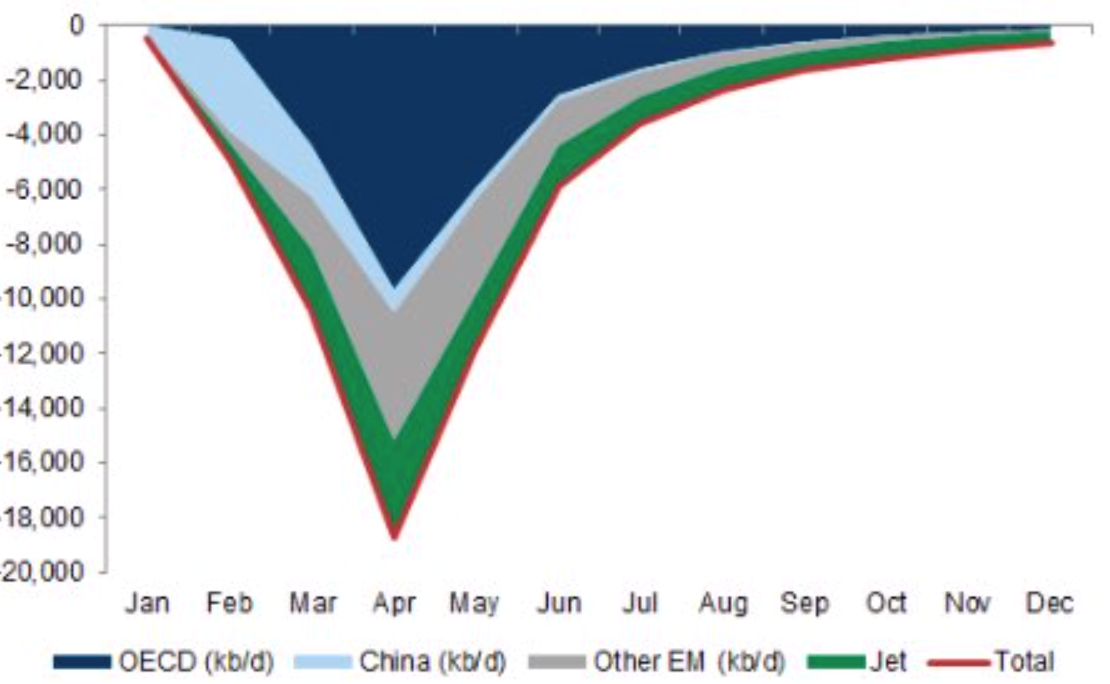 The supply-side of the equation is much harder to predict given the multitude of possibilities of producer reactions to low, yet extremely volatile oil prices in which a great deal of oil production becomes uneconomical. The International Energy Agency (IEA) estimates that about 3.8-5.0mbbl/d of global production is uneconomical at $25-30/bbl prices for Brent crude. The industry has responded to the severe price drop by cutting expenses and in particular capital spending plans with the IEA reporting a range of 20-30% in cuts to initial plans for 2020. It would be reasonable to conclude that these and other actions would lead to the removal of about 2-5mbbl/d from an initial supply estimate of 102mbbl/d for 2020. But these will take a few months to alter the supply-demand imbalance and as such all the excess supply will end up in storage.

Global crude storage capacity will likely be maxed out in the next few weeks, currently estimated at 63% capacity with an effective full capacity at 80%, which will force additional significant production cuts above and beyond the above mentioned 2-5mbbl/d - this time by economically viable crude producers. This will likely accelerate, or pre-empt, the currently discussed plans for a new round of coordinated production cuts by OPEC+, or OPEC++ if other countries such as the U.S. join.

All of the above will likely mean that oil prices will remain under pressure for the next 9 to12 months, probably in a price range of $30-40/bbl for Brent crude. However, with a return to some sort of post-lockdown normalcy in early 2021, low oil prices should stimulate demand, and coupled with the massive worldwide fiscal stimuli to the global economy should begin to recover. Following a time-lag, as demand absorbs the stored supply, the supply-demand picture should be tilted in supply's favour, and oil prices will trend higher - likely to a price range of $45-55/bbl for Brent crude.

The outlook for Iraq, within this scenario, i.e. an average of $30-40/bbl for Brent crude over the next 12 months, is far from benign, but hardly bleak. As noted here in the past, the economic consequences from the continued political paralysis would be that no new budget will be passed, and thus the government will continue to implement the current spending parts of the 2019 budget. However, it will embark on dramatic cuts to investment spending plans and expenditures on goods and services, though it will maintain expenditures on salaries, pensions and social security. These measures could lead to annual expenditures of $69bn resulting in a cumulative 12-month budget deficit of $25bn-38bn. This can be comfortably funded by indirect monetary financing by the Central Bank of Iraq (CBI), with its foreign currency reserves of $67bn as of the end of 2019.

Beyond the next 12 months, Brent crude prices in a range of $45-55/bbl will remove much of the pressure on government finances, but the exact timing of the post-lockdown return to normal with the new level of oil prices means that Iraq cannot avoid embarking on an accelerated and significant set of economic reforms, previously agreed to with the IMF in the 2016 Stand-By Agreement (SBA) but abandoned when oil prices recovered in 2018. However, with an increasingly alienated population these reforms would not come about without meaningful political reforms.

As a measure to contain the outbreak of COVID-19, the government announced a one-week nationwide curfew, starting on March 16th that was extended twice to April 11th. Trading on the Iraq Stock Exchange (ISX) was suspended in response to these instructions and the market, as measured by Rabee Securities RSISX USD Index (RSISUSD), ended the month down 7.1%.

The concentrated selling in the few foreign favoured stocks that began in January continued into March. However, as in February, the list narrowed further, and turnover declined. Given the uncertain global economic outlook, this selling could continue when the market resumes trading. Nevertheless, as Iraq's equity market was discounting neither an economic nor a corporate earnings recovery, it's difficult to see why it should decline as other markets have elsewhere. Most global markets have had multi-year bull markets and would need to discount vastly different economic assumptions than those that led to their multi-year rises. This explains the better action by the ISX compared to other markets during the recent sell-off - the decline, at least until March 16th, was less than other markets as can be seen from the chart below and arguably makes the risk-reward profile more attractive for the ISX versus these markets as portfolio allocations are rebalanced in the light of the changed global environment. 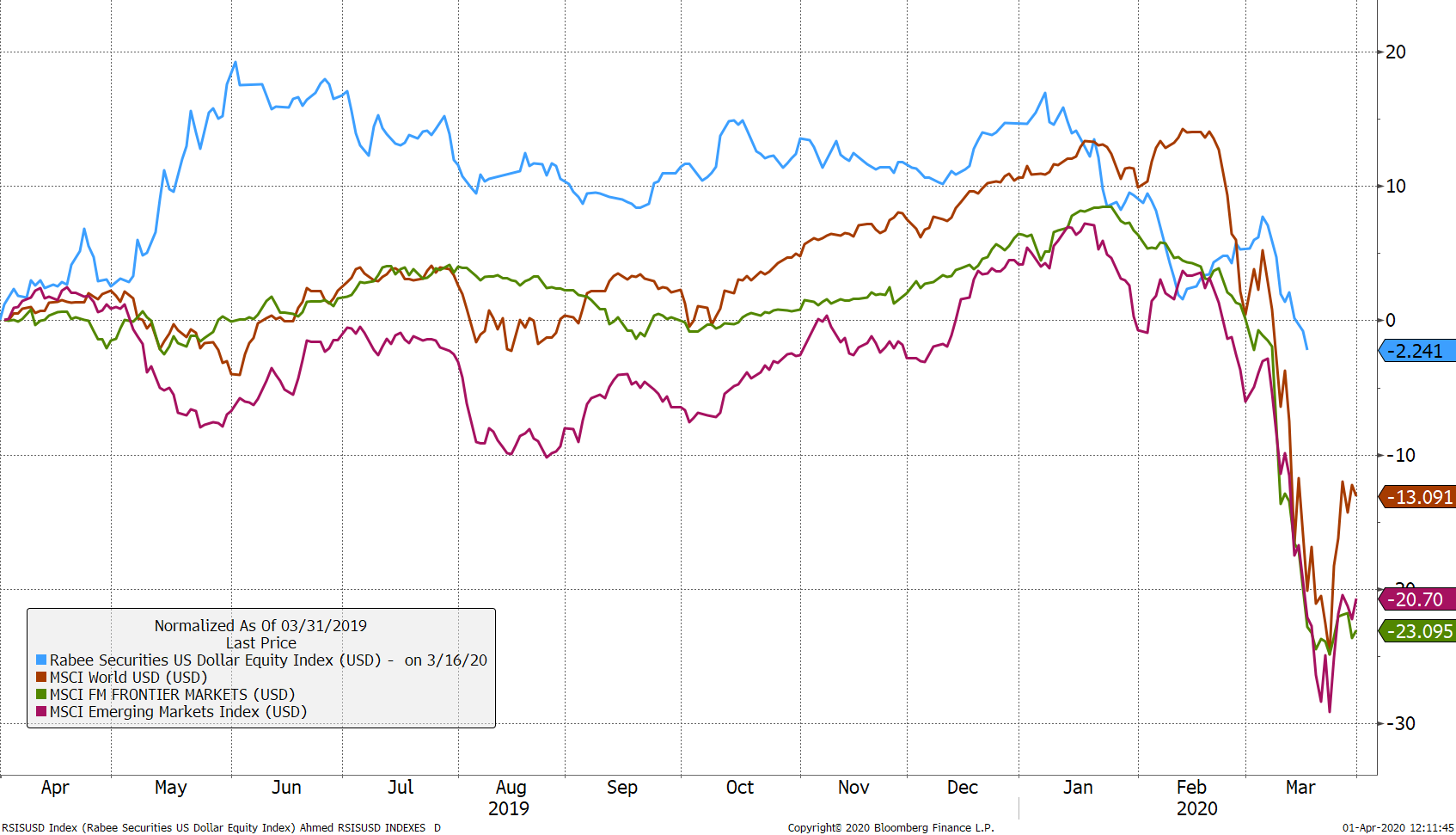