By Editor on 6th March 2020 in Ahmed Tabaqchali, Investment

By February's end the market, as measured by the Rabee Securities RSISX USD Index (RSISUSD), was down -3.7%.  The month saw a continuation of the heavy foreign selling in January and mostly in the same foreign favoured stocks, i.e. Baghdad Soft Drinks (IBSD), Asiacell (TASC), and Mansour Bank (BMNS). However, not only was this foreign selling comfortably absorbed by local buying, but its effect on the market was much smaller than previous instances of foreign selling as can be seen from the chart below: 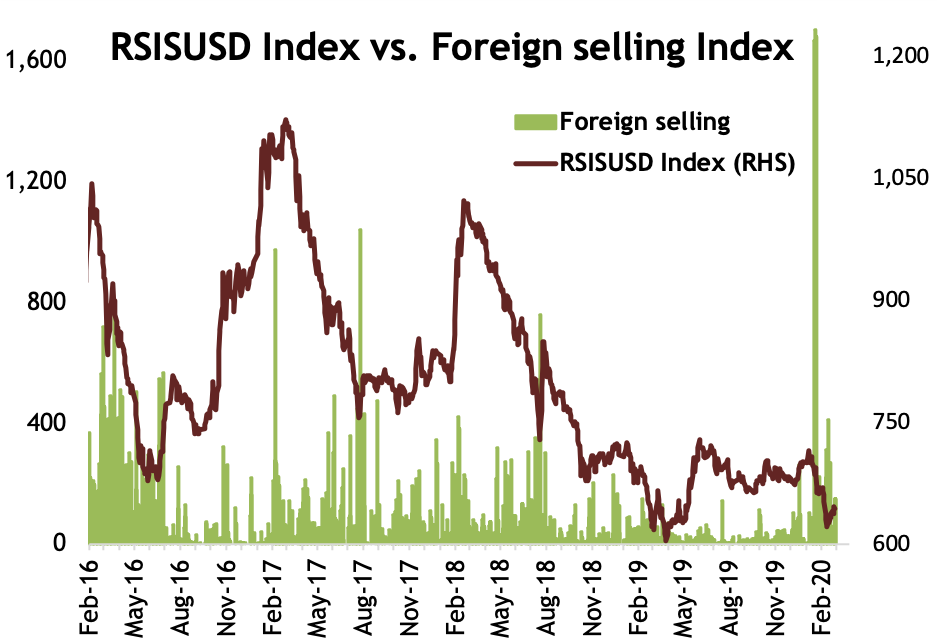 The most recent instance of such concentrated foreign selling was in January-February 2019, which although much smaller in absolute amounts, led to declines across the board that took the market to multi-year lows. It should be noted that foreigners were buyers too in instances of concentrated foreign selling, but that the selling then soured local sentiment and so was the main driving force behind the weakening prices which lasted even when the selling subsided.

The most promising aspect of the current market's action is that while overall market turnover expanded meaningfully in both of January 2020 and February 2020 versus the turnover of the last 12 months, it was concentrated in the stocks mentioned earlier. Ordinarily it would have been next to impossible for the usual liquidity in each of these stocks to deal with this volume of selling without significant price declines, however local demand absorbed them relatively comfortably. For January and February: TASC was -6.7% and -12.3%, IBSD was -10.3% and -11.9%, and BMNS was -3.0% and 0.0% respectively. Bank of Baghdad (BBOB), another foreign favoured stock, on the other hand was up +7.1% in February, reflecting foreign buying after experiencing heavy foreign selling in January that saw it down -6.7% then. 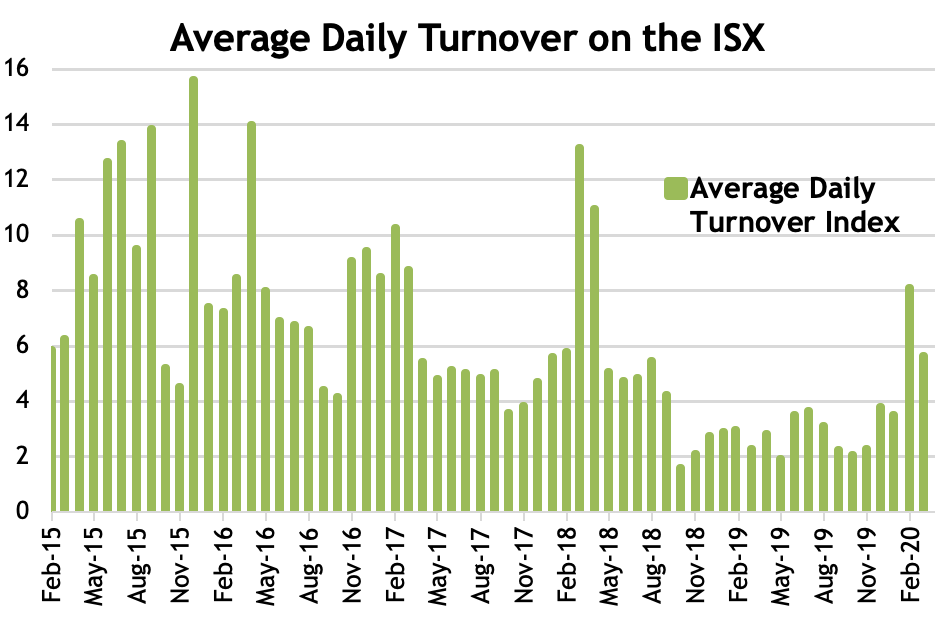 Foreign sellers would have had a smorgasbord of concerns to choose from: Some could be expectations of instability arising from the current political chaos in Iraq, ramifications of the US-Iran tensions, and the spill over effects of these on the Iraqi economy. Or the speed and extent of the advance of the coronavirus raising fears of a worldwide pandemic, the effects of this spread on the world economy, and the subsequent consequences for oil prices - the major source of Iraq's earnings.

However, as serious as these concerns are, the latest macro figures show that they had a short-term effect on the Iraqi economy that has subsided - at least this is the message as of end of February. The first of these macro figures is the market price of the exchange rate of the Iraqi Dinar (IQD) versus the USD, which continues to decline and converge to the official price by end of February, after recovering from mid-January onwards as reported here last month. It is now at the lower end of levels that prevailed over the last 20 months since it began diverging in October following the countrywide demonstrations, and spiking following the events at the start of the year as can be seen below: 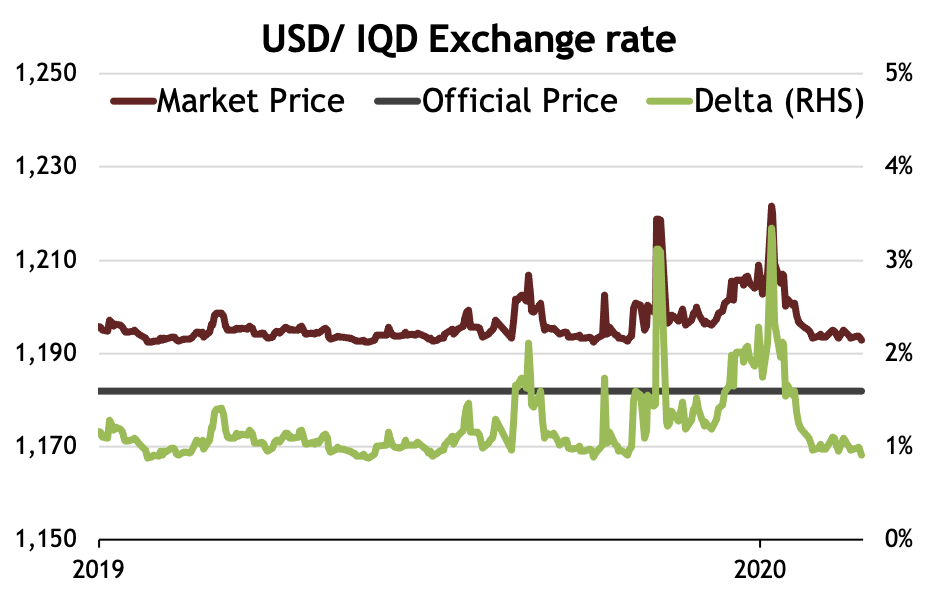 More importantly the premium of the IQD-USD exchange rate for physical USD notes has returned to the lower end of its normal range of 2-4% over the market price of the USD (red line in chart above). This premium widened significantly during the spikes in the market rate for USD earlier in the year but settled down to about an 8% premium by the end of January, and then to under the 2-4% range by the end of February. All of this argues that the FX market is indicating that the disruptions to economic activity over the last few months have subsided considerably. Although the counter argument would be that the decline in the premium is a function of weakening demand in the cash dominated local retail and trade markets. But then the volumes in the Central Bank of Iraq (CBI)'s daily currency auctions, which are a function of bids or orders for USD, have been mostly at the same levels that prevailed over the last 20 months or so and thus it's difficult to argue that end demand has weakened, but this counter argument cannot be dismissed yet.

The uncertainties, and differing interpretations of the health of the economy, will continue to persist until other macro data for January, February and beyond are released by the CBI over the next few weeks. Whichever interpretation prevails, preliminary data on the deposit component of the monetary base M0 (i.e. commercial bank's reserve deposits with the CBI) show a meaningful drop in January from the levels of the last few months as can be seen below. A decline in banking reserves held with the CBI would be due to drops in customer (consumer, business and government) deposits held with these banks. 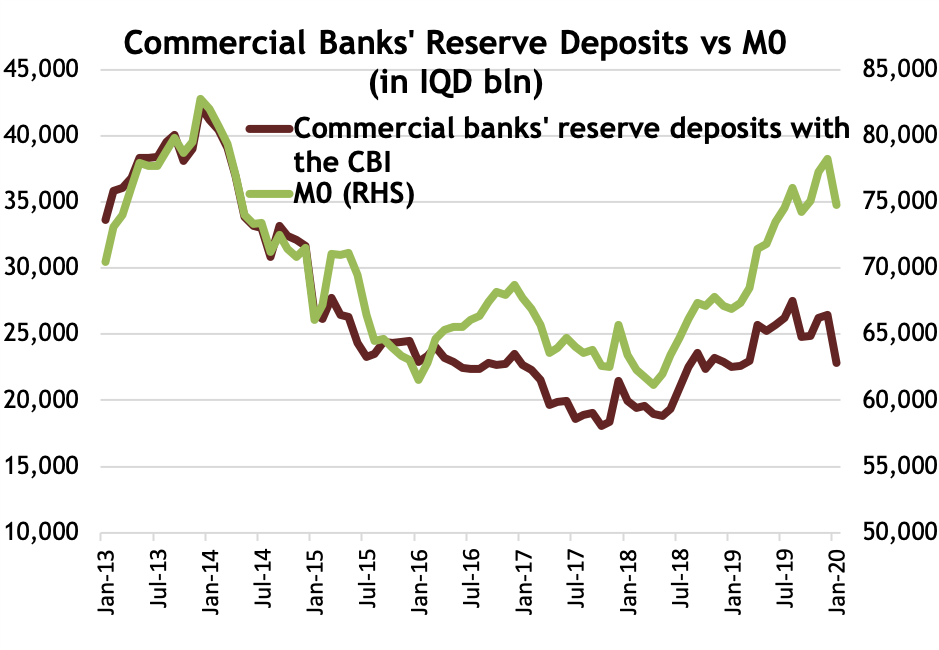 This drop argues that the significant geopolitical events early in the year had a meaningful negative impact on the economy in January. Although the deposit component of the monetary base M0 by end of January recovered from the larger drop seen in the middle of the month, the preliminary nature of this data precludes any definite answer. Moreover, updated CBI figures would be overall figures which would not broken down into consumers, businesses or government deposits. Moreover, it's equally difficult to see if this was a phenomenon for January and that February would begin to witness a recovery or if it would be an extension of January.

Until newer data suggests otherwise, the most likely explanation is that the disruptions to economic activity, and in particular to the cash-dominated retail and trade markets, led to a decline in deposit formation as cash was used by companies/corporates to fund operations in an environment of declining sales. Partially supporting this argument, are CBI data as end of November 2019 for private sector deposits and loans, which shows continued growth in deposits and loans, with deposits ahead, as can be seen from the chart below. 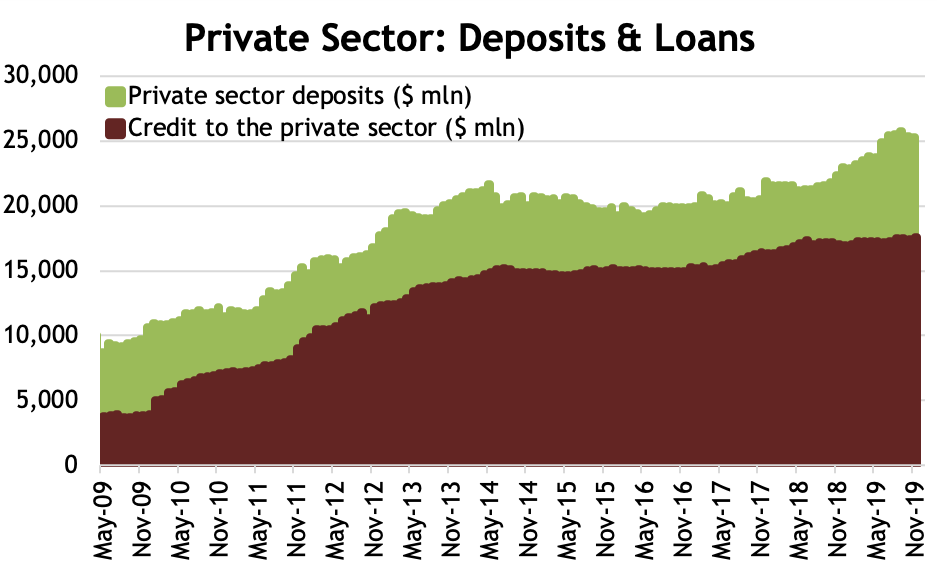 Earnings data from two of the leading banks, National Bank of Iraq (BNOI) and the Commercial Bank of Iraq (BCOI) support the continuation of these trends into end of 2019. BCOI reported a drop of -4% in loans in 2019 over 2018, but deposits increased by +9% in the same period. While, BNOI reported a +120% increase in loans in 2029 over 2018, and deposits increased by 32% in the same period. The difference in performance reflects the different positions of each bank and its growth strategy - which would be seen as other leading banks report over the next few weeks.

Quarterly earnings data, especially for BNOI which has been leading the banking sector in 2019, lend credence to linking the divergence between the market price of the USD from the official price, that began in October of 2019, to the disruptions to economic activity from the start of countrywide demonstrations then. These quarterly data show a sequential slow-down or decline in these metrics by the fourth quarter (Q4). Loans increased by +2% in Q4 over Q3, +22% in Q3 over Q2, and +39% in Q2 over Q1. Deposits on the other hand declined -14% in Q4 over Q3, increased +20% in Q3 over Q2, and +22% in Q2 over Q1 - while Q4 numbers would be affected by year-end requirements for closing the books, which in Iraq are both cumbersome and time consuming. Nevertheless, the decline in deposits in Q4 would argue that the use of cash, through deposit withdrawals, by companies/corporates to fund operations might have started earlier than January as argued in an earlier paragraph.

Overshadowing the economic data is the continued political paralysis and the inability of the political class to deal with the demands of the five-month long youth-led protest movement. In the last few weeks an unsustainable holding pattern has developed in which the nationwide demonstrations persist, in passion if not in the same intensity of earlier months, while the repression apparatus of the state and the sub-actors continues to take its toll in casualties- both in death and injuries. For now, the political class's existential fear from the demonstrations has subsided enough for it to return to the old political squabbles as can be seen from the difficulties that the prime minister-designate faced in forming a government. These proved too difficult to surmount which eventually forced him to withdraw his nomination. This means a new search began for the illusive candidate that would square the circle- i.e. satisfy the protest movement's demands for change, while preserving the status quo for the political elite.

The political class's existential fear from the demonstrations will continue to ebb and flow, and thus these political uncertainties are likely to continue. However, the economic consequences would be the same whether a new government forms under another prime minister-designate, or if the current caretaker government continues to limp on. These consequences would be that no new budget will be passed and thus the government continues to implement the current spending parts of 2019's expansionary budget. While it is difficult to estimate the medium-term effects of the disruption to the world economy from the coronavirus and thus on oil prices, yet the government has enough fire power to continue this expansionary budget at least for 2020. This firepower is in the form of a likely year 2019 surplus of USD 2-4 bln for a total of a three-year surplus of USD 25-27 bln - more than enough to compensate for any shortfall in oil revenues during 2020.

Drops in oil revenues in 2020 are likely to happen given the severe drop in global oil prices over the last few weeks as seen in February's export data. Oil exports in February were about USD 5.1 bln down from USD 6.2 bln in January, reflecting a drop in Iraqi oil price from USD 60.14 per barrel in USD 51.37. However, exports increased to 3.887 mln barrels per day (bpd) in February, up from 3.694 mln bpd in January and therefore revenues from oil exports would be about USD 5.5 bln, and not USD 5.1 bln, if February had 31 days and not 29 days making for better month-on-month comparisons.