By Editor on 7th May 2020 in Ahmed Tabaqchali, Investment

Iraq, like other countries, went into full lockdown on March 16th that was only partially lifted just before the fasting month of Ramadan - in which activity is normally subdued. Unlike many countries, Iraq went a step further in that its lockdown included its whole financial sector.

In particular, the Central Bank of Iraq (CBI) and the banks that it regulates suspended most activities during the lockdown. In turn, this negatively affected the availability and circulation of the USD in the country's cash dominated economy - where about 85% of the currency in circulation is outside the banking system.

The CBI conducts five daily USD auctions every week to facilitate foreign trade transactions (transfers or green bars in the chart below) and to satisfy the need for physical USD for Iraqis travelling abroad (cash or red bars in the chart below). The closure of this facility over the lockdown period, and its much-reduced frequency following that, have naturally resulted in an unmet need for USD and hence a rise in its price in the market versus its official price.

Typically, the market price of the USD is at a premium to official prices, but spikes higher during periods of uncertainty or crises - the last of which were the momentous events at the start of the year that raised the feared spectre of a US-Iran proxy war fought in the country. This premium began to spike, and stayed at elevated levels, as the lockdown came into full effect as can be seen from the chart below. 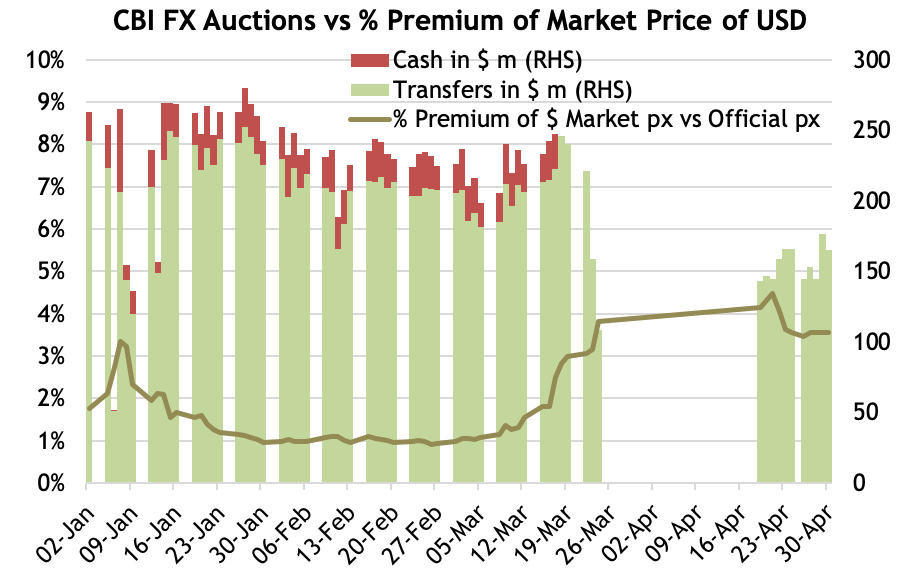 (Source: Central Bank of Iraq (CBI), Asia Frontier Capital. The CBI did not provide market prices on March 16th-April 21st, so the chart assumes gradual increases in prices in this period)

Consequently, this affected the market price of the physical USD which normally trades at a further premium of 2-4% over the premium discussed above (i.e. the gold/brown line in the above chart). This extra premium widened, as it does during spikes, and is now about 8-10% and remained at these elevated levels by the CBI's ceasing of its offering of physical USD in its currency auctions from mid-March (above chart). In a country in which the dissemination of economic updates is poor and trust in the government is very low, rumours come to the fore and drive perceptions and subsequently fears.

One such rumour that dominated perceptions was that sharply falling oil prices were resulting in major USD shortages at the government level and it was thus conserving its reserves by stopping the flow of physical USD. This line of thinking has some merit as it takes its cue from a similar pattern during 2014-2017's twin crises of the ISIS conflict and the collapse in oil prices. However, then the CBI restricted the supply of the USD during its auctions but didn't stop either transfers or cash offerings. As it turned out, the physical USD offerings were halted as no foreign travel was taking place, given that they are meant to satisfy the needs of individuals' foreign travels.

Rumours of a USD shortage aside, the weakening of demand in the economy is evident as seen from the smaller volumes of transfers in the currency auctions during late April, and from the "Community Mobility Reports" provided by Google. These are based on data from mobile phone users who have opted-in for "Location History" on their Google accounts. These users provide a reasonable population sample given the high levels of mobile penetration in Iraq (chart below) - more so given the high combined Samsung/Huawei market share, a proxy for Google's Android system, which is about 75% in mobiles - and thus should provide a reasonable picture of economic activity during the lockdown. 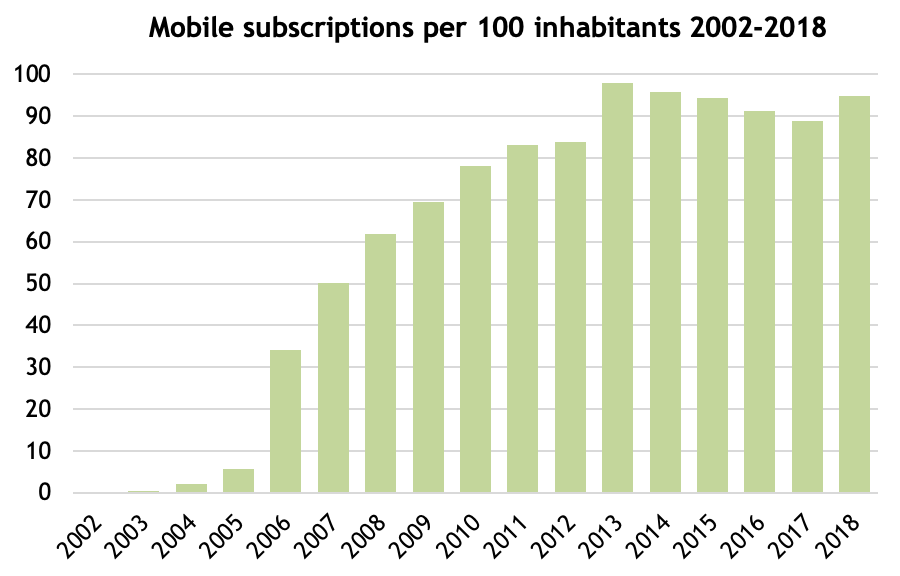 While every sector of the economy has felt the effects of the lockdown, the informal sector - dominated by retail trade, transport and hospitality, and which accounts for the bulk of private-sector economic activity in Iraq - has been particularly hard hit as can be seen from the chart below, which shows changes in activities compared to the baseline January 3rd-February 6th. 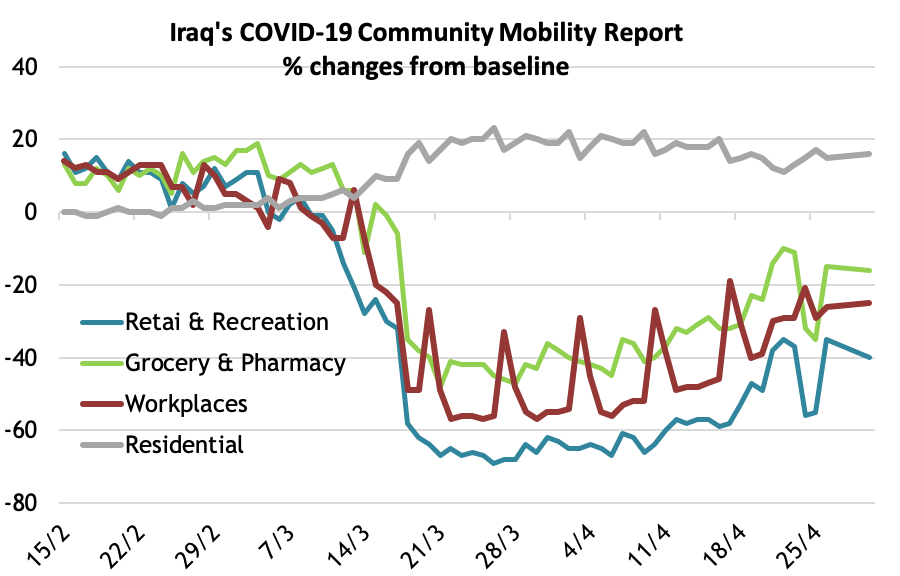 (Baseline is the median, for the corresponding day of the week, on January 3rd-February 6th,

However, the decline in activities are likely to have been more precipitous than shown in the above chart as activities in the retail, transport and hospitality sectors were subdued during the baseline period given the chilling effects of the dramatic events at beginning of the year. More so, these events came on the back of a slowdown induced by the continued countrywide demonstrations from October 2019.

The Iraq Stock Exchange (ISX) resumed trading on April 26th, after closing on March 16th, and in-line with government guidance of reduced commercial activity, it reduced trading days to three days per week from five. However, the board of governors of the ISX, in a misguided attempt to calm market fears, lowered the daily stock price limit downs to 5% from 10%, but kept the upside limit at 10%. Inevitably it did the exact opposite of its intended purpose, as the same low trust in authorities fuelled rumours that the market authorities were hiding some major negative news. The new limit-down limits served as magnets for sellers during the remaining three trading days of the month with prices obligingly closing down 5% on each of these days. As often happens in frontier markets, buyers disappear for several days as sellers chase down small bids and drive prices to very attractive levels. While prices tend to recover as buyers return to pick up bargains, which seems to be taking place in early May.

For the three days that made the trading month of April, the Rabee Securities RSISX USD Index (RSISUSD) was down 12.7%. The argument made here last month that " Iraq's equity market was discounting neither an economic nor a corporate earnings recovery, it's difficult to see why it should decline as other markets have elsewhere", is stronger now, especially given that the market by end of April is now down 75% from the 2014 peak.

The closing argument of the Asia Frontier Capital team in the March newsletter, is an appropriate end here.

"The recent stock market correction, though painful, is now providing an excellent entry point to investors as valuations across our universe are at 10-year lows - stock picking has never been easier. Though we believe global markets could remain volatile in the near term as the number of infections rise and poor economic numbers come through, a sustained rally could be seen once there is an indication of infections peaking especially in Europe and the U.S.

"Asian frontier markets have bounced back very strongly after previous episodes of market dislocation such as in 2008-09 with markets like Pakistan and Vietnam generating much higher returns than major indices. Though it is very easy to get distracted with the negative consequences of the pandemic, Asian frontier markets are at present and will over the next few months provide an opportunity to invest in these markets last seen a decade ago."