Market Review: "Not as Bad as Feared, but Still Pricing It"

As May drew to a close the 'worst-case' prognosis for Iraq in the wake of the carnage brought about by COVID-19 turned out to not be as bad as originally feared - not by a wide margin. But its equity market is still discounting the worst of possible outcomes, notwithstanding a strong close for the month with the Rabee Securities RSISX USD Index (RSISUSD) up 10.7%.

The first of the negatives to dissipate was the political chaos that gripped the country for over six months since the youth-led protest movement forced the resignation of the prime minister. The severe crisis brought on by the collapse in oil prices, and the threats - health and economic - of COVID-19, forced the political elite to suspend their quarrels and appoint a prime minister whose reform agenda would threaten their interests.

The fundamental governing equations of Iraq's political system - which largely allowed the political elite to maintain their oversized influence on economic policies - are mostly still functioning. Yet, the scale of the economic crisis is providing the new government the opportunity to pursue meaningful economic reforms. As articulated by the Minister of Finance, these reforms include a fundamental retooling of the budget's structural imbalances that favoured current spending over investment spending.

The first of these are likely to be cuts to public payroll expenditures (at 47% of the 2019 budget), which coupled with other rationalization measures and an improving oil price environment (discussed below) would relieve the pressure on government finances. Crucially, embarking on such reforms would allow a resumption of the dialogue with the IMF, following the straining of the relationship by the prior government's abandonment of the 2016 Stand-by Agreement. Such a dialogue would allow Iraq access to debt markets as it seeks to restructure its past failed economic model.

The appointment of the new PM was followed by easing of the concerns that prompted the collapse in oil prices to historic lows in late April. Q2 is likely to see a much less dramatic decline in world oil demand, estimated to drop 20% versus last year, whereas expectations were for a drop of 30%.

This was complemented by a surprisingly massive, estimated, 12% drop in world oil supply in May as the OPEC+ agreement came into effect, as well as a much larger than expected drop in production elsewhere, especially in US shale oil. The combination reduced the severe pressures on global crude storage capacity and provided support for oil prices.

Finally, like in the rest of the world, Iraq is slowly emerging from lockdown and resuming economic activity, providing much-needed relief to the country's private sector. While every sector of the economy has felt the effects of the lockdown, the informal sector - dominated by retail trade, transport and hospitality, and which accounts for the bulk of private-sector economic activity - has been particularly hard hit as seen from the chart below, which shows changes in economic activity compared to the baseline between January 3rd and February 6th. 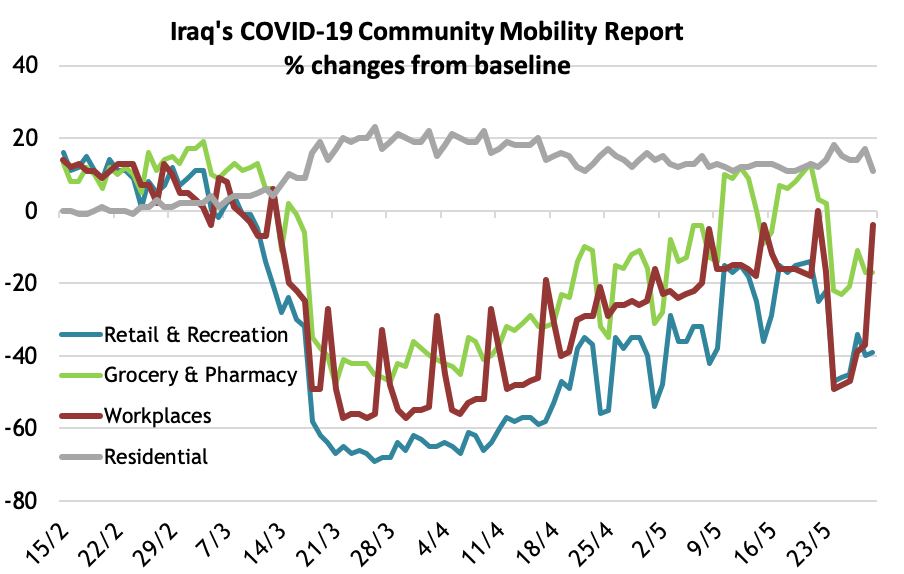 (Baseline is the median, for the corresponding day of the week, during January 3rd - February 6th,

However, economic activity has recovered to about 80% of pre-lockdown levels - with the big drop in late May being due to the Eid holiday. This recovery will likely gradually continue over the coming weeks and will contribute to the healing of the economy. However, it should be repeated that the decline in activity is likely to have been more precipitous than shown in the above chart as activity in the retail, transport and hospitality sectors was subdued during the baseline period given the chilling effects of the dramatic events at beginning of the year. More so, these events came on the back of a slowdown induced by the continued countrywide demonstrations since October 2019.

The lockdown, for all its ills, brought some unexpected benefits to the beleaguered private sector. Part of the imposed measures were the closure of border posts with neighbouring countries. This provided breathing space for the private sector and an opportunity to grow - an opportunity that is likely to be enhanced as part of the new government program to diversify resources by stricter implementation of tariffs on imported goods.

During May, the Iraq Stock Exchange (ISX) continued operating in-line with the government's guidance of reduced commercial activity, with three trading days per week down from the prior five - which was further reduced as the market closed on 21st May ahead of the extended Eid holiday. As argued last month, the misguided attempt to calm the market's fears by lowering the daily stock price limit down to 5% from 10%, after leading to a sell-off in the three trading days in April, reversed sharply in May's nine trading days as the market rose 10.7%.

The not as bad as feared hypothesis notwithstanding, the outlook for Iraq is still fraught with uncertainties. For starters, oil prices have recovered significantly and have begun to discount a supply-demand imbalance in favour of supply sooner than expected. Yet the evolution of the COVID-19 pandemic is uncertain as the world slowly emerges from a global lockdown and the consequences of global economic disruptions in the wake of COVID-19 are still unfolding with significant implications for oil demand. Higher oil prices will also likely bring back some of the shuttered supply - especially relevant in the case of US shale oil given its sensitivity to price. The most likely scenario is still a 12-month average price of $30-40 per barrel (/bbl) for Brent crude and $45-55/bbl average for the subsequent 12-months.

Additionally, the new government has a herculean task of passing its proposed reforms through the status quo focused political elite which dominates parliament, while at the same time needing acceptance of its austerity program by an alienated population. Finally, the ease of the lockdown measures brought a sharp increase in COVID-19 cases, raising fears of a second wave of the pandemic and a re-imposition of lockdown measures as evidenced by the introduction on 31st May of a one-week curfew to contain the latest increase in cases, which was subsequently extended for another week.

These concerns notwithstanding, as Iraq's equity market was discounting neither an economic nor a corporate earnings recovery, it is worth concluding this update with the same one made here last month, i.e. citing the closing argument of the Asia Frontier Capital team in the March newsletter:-

"The recent stock market correction, though painful, is now providing an excellent entry point to investors as valuations across our universe are at 10-year lows - stock picking has never been easier. Though we believe global markets could remain volatile in the near term as the number of infections rise and poor economic numbers come through, a sustained rally could be seen once there is an indication of infections peaking especially in Europe and the U.S.

"Asian frontier markets have bounced back very strongly after previous episodes of market dislocation such as in 2008-09 with markets like Pakistan and Vietnam generating much higher returns than major indices. Though it is very easy to get distracted with the negative consequences of the pandemic, Asian frontier markets are at present and will over the next few months provide an opportunity to invest in these markets last seen a decade ago."