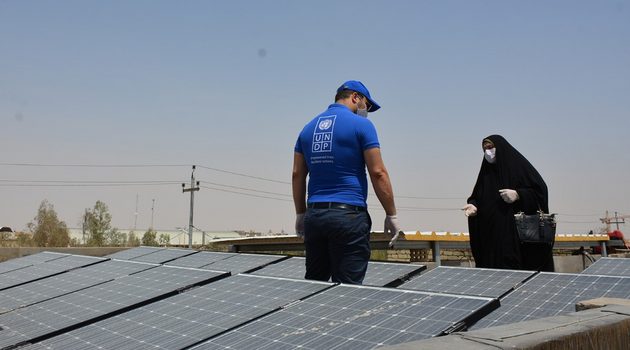 By Editor on 29th June 2020 in Construction & Engineering In Iraq

Characterized by long, hot and clear summers, Najaf, Iraq's holy city, seems like the ideal place to realize the potential for solar energy in Iraq. Which is why in 2016, Najaf was selected as one of three sites to pilot rooftop solar photovoltaic (PV) systems, testing their potential for application across the sunny nation.

Energy consumption in Iraq is dominated by fossil fuels, at 96%. Not only is this a missed opportunity for the subtropical nation, but it has had very real, and visible consequences for the environment. As public infrastructure struggles to cope with the growing population, dependency on diesel generators has created a smoggy reality, with the air pollution levels in Iraq linked to health consequences for the nation.

In 2016, with support from the Global Environment Fund (GEF), six families were selected to receive rooftop solar PV systems. These initial six families, were selected as part of a pilot to raise awareness and demonstrate the potential benefits of solar energy. Since then, some of these families have benefitted from the cost savings and all are excited by a new vision for clean energy and solar for their country.

"I knew that using solar energy had positive returns on the environment, and in a country like my homeland, Iraq, there is an urgent need to use it," explains Ihsan, 49-year-old father-of-four and recipient of a rooftop solar PV system in Najaf. "But I was also surprised in many aspects, I didn't know that by generating clean energy, I could contribute to my community," he adds, pointing to the excess energy the panels provide being pumped back into the government grid.

For Qusai, a 45-year-old father-of-four and Ihsan's neighbor, the benefit was also linked to the "clean" aspect of solar energy production, "The financial burden of relying on expensive diesel generators and the noise and smog produced, makes solar energy very appealing," he explains. "It's also very efficient!"

On average, each of the six households were able to save $2,300 over the past four years and a total of 58,000 kgs of CO2 was saved from being emitted into the atmosphere - that's the equivalent of consuming more than 7,000 gallons of diesel.

But to make the use of solar energy more sustainable, UNDP and the GEF knew that Iraq would need trained and experienced personnel to maintain and repair the systems.

Faridha, a local Najaf resident and Head of Amal Al-Hayat Organisation for Culture and Information, was one of 25 civil society organization members - including 15 women - trained in operating and maintaining solar PV systems, to both support the piloting of these systems over the past four years, but also act as advocates for the adoption of cleaner, greener energy across Najaf.

"Before the training, we had heard about solar energy, but we did not know how we could benefit from it in Iraq, especially in the province of Najaf," she explains. "Solar energy is an investment for the citizen. If people consume wisely, they benefit not just themselves, but their community."

One Response to Testing the Potential of Solar in Iraq