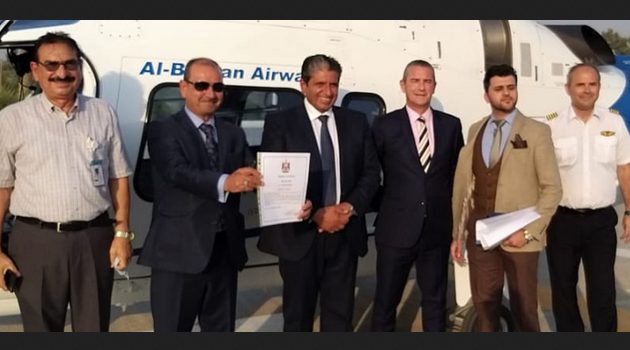 By Editor on 11th September 2020 in Iraq Transportation News

After an intense collaboration between Al-Burhan Airways and Al-Burhan BIAP Hotel, a fruitful result has finally been obtained by the establishment of the first licensed Heliport in Iraq (Heliport #001).

An opening Ceremony took place on the 10 of Sep, which was attended by the ICAA Director General, BIAP Airport Director, GCANS General Manager and several other parties.

Al-Burhan Group GM Mr. Imad Burhan and Al-Burhan Airways Accountable Manager Mr. Saad Al-Khafaji had both given a brief overview of the new established heliport specs and invited the attendance to witness the heliport first touchdown.

After the successful touch down ABA commercial manager and designer of the Heliport, Noor Hamanadi, gave the following statement:

"This Heliport follows the International Civil aviation organization standards (ICAO annex 14 VII) and the ICAR 12 VII regulations, we certainly hope this heliport adds an extra star to the classy Al-Burhan BIAP hotel and encourages other hotels and establishments to include such a classy facility within their grounds."