By Editor on 6th December 2020 in Ahmed Tabaqchali, Investment

The market, as measured by the Rabee Securities RSISX USD Index (RSISUSD), was up 1.0% in November in what is likely to be a continuation of the consolidation of recent gains that began last month with the pause of the five-month recovery from the multi-year lows reached in April.

The market continued to follow through with both the multi-month gradual recovery in daily turnover and the active participation of foreigners as net buyers, as discussed last month.

Economic activity, in-line with the improved market sentiment, has mostly returned to the levels that prevailed prior to the great lockdown in March, as can be seen Google's mobility report (chart below). 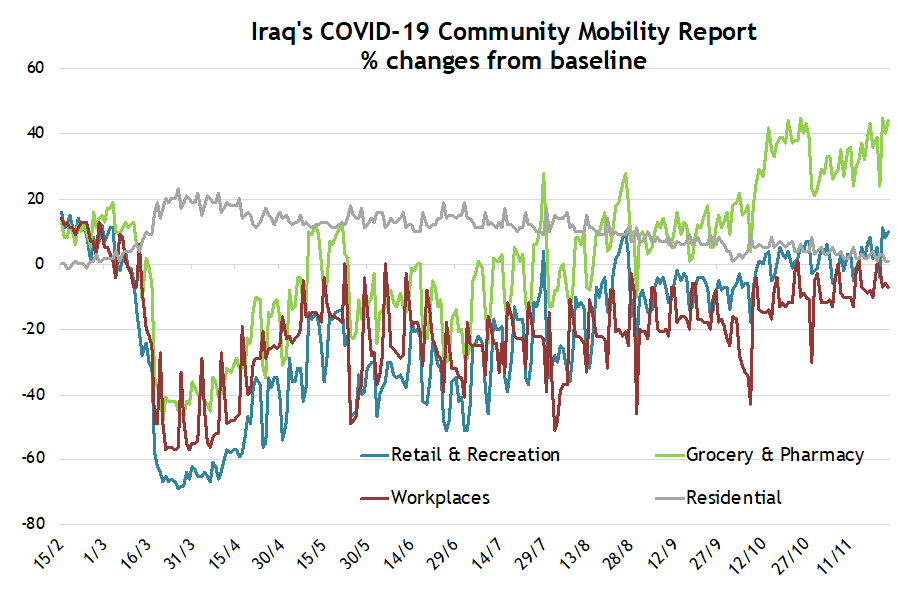 (Baseline is the median, for the corresponding day of the week, during January 3rd -February 6th,

However, even though this high-frequency data is a positive early economic indicator, it doesn't confirm that the increased activity will translate into a similar increase in economic transactions. Demand for the USD is yet to show any improvement from the lower-than-normal pace of the last few months - average daily volumes in the period from July to November are running at about 84% of those that prevailed in the period January to mid-March.

This can be seen from the volumes for USD-Iraqi Dinar (IQD) transactions (chart below) as conducted by the Central Bank of Iraq (CBI) in its weekly USD sales (transfers to facilitate foreign trade transactions as indicated by green bars and to satisfy the need for physical USD for Iraqi's travelling abroad as indicated by the red bars). 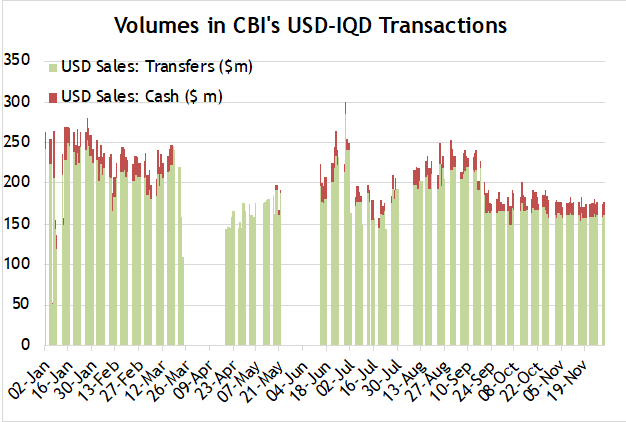 Demand for USD in the CBI's transactions is a reasonable proxy for consumer demand given the country's high dependence on imports to satisfy domestic consumption of goods and services. However, the usual time lag between consumer purchases domestically and increased demand for exports implies that it's too early to reach any conclusions on whether domestic consumption has recovered or not.

While more economic data is needed for a more complete picture to emerge, among positive indicators is that private sector deposit and loan growth, in effect from early 2018, has continued throughout 2020 with loan growth finally catching up with deposit growth in early 2020, according to the latest CBI data as of the end of July (chart below). 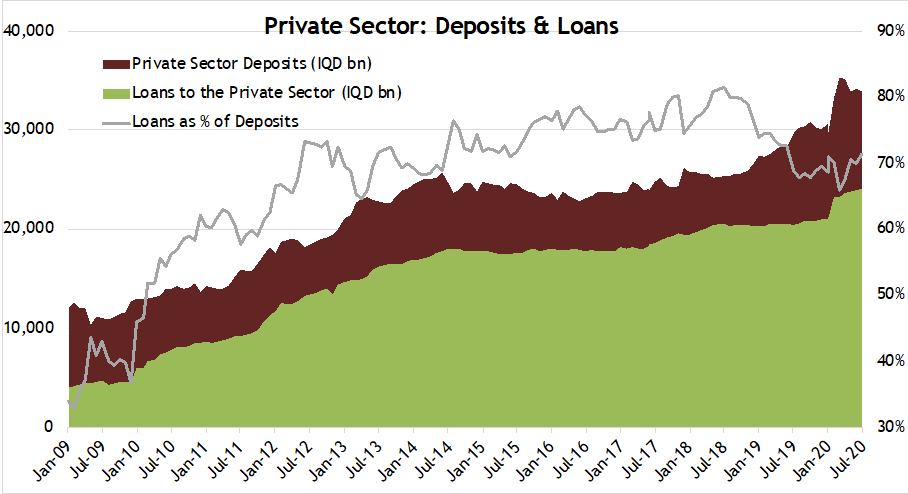 The data shows strong multi-year growth in private sector deposits and loans having peaked at the onset of the twin crises of the ISIS invasion and the fall in oil prices in 2014 and stagnating afterwards throughout the economic crisis of 2014-2017. The recovery in oil prices and the end of the conflict by 2018 led to gradual growth in private sector deposits that accelerated from early 2019. Loans to the private sector, while similarly recovering gradually, only picked-up again in 2020. The present loan/deposit ratio of 0.70x is low relative to the average of the prior few years of 0.75-0.80x, which suggests that current deposits can support continued loan growth.

The acceleration in private sector deposit growth in 2019 was spurred by a consumer spending-led economic growth as a consequence of the expansionary 2019 budget, while the continued growth in private sector deposits and the pick-up in loans in 2020 was spurred by a the adoption of an accommodative monetary policy by the Central Bank of Iraq (CBI) to counter the effects of the pandemic-induced disruptions to the economy, as reported by the World Bank in its latest report on Iraq. As a consequence, one of the main changes was reducing banks' reserve requirement from 15% to 13% to boost loan growth, as well as other measures to ease the loan servicing burdens for the private sector - in particular for the micro-, small- and medium-sized enterprises (MSME) which constitute the bulk of the private sector. These were complemented by government measures to offset some of the worst effects of the pandemic on the most vulnerable members of society.

However, this revival of private sector deposit and loan growth, as positive as it is, did not, with a few exceptions, benefit the commercial banking sector as the private sector shifted more to the state banks at the expense of the commercial banks given the perceived security provided by implicit government guarantees (chart below). The root cause of this has been the damage done to the banking sector, and in particular to the commercial banks during the 2014-2017 crisis that saw the non-oil economy contract by 3.9% and 14.4% in 2014 and 2015 respectively, grow by 1.3% in 2016, only to contract again by 0.6% in 2017. 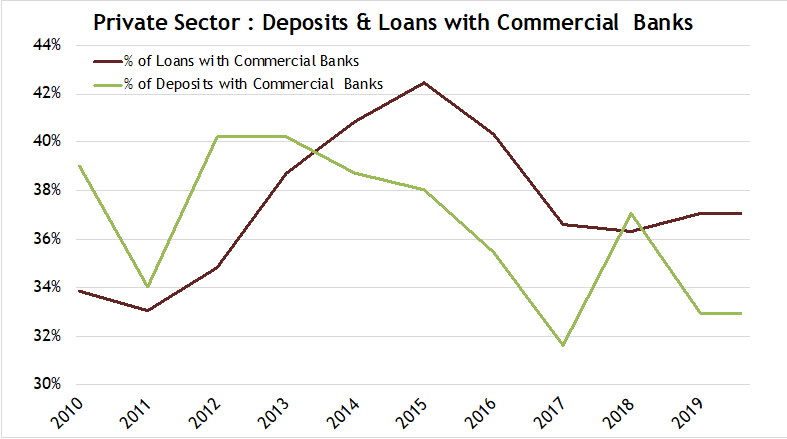 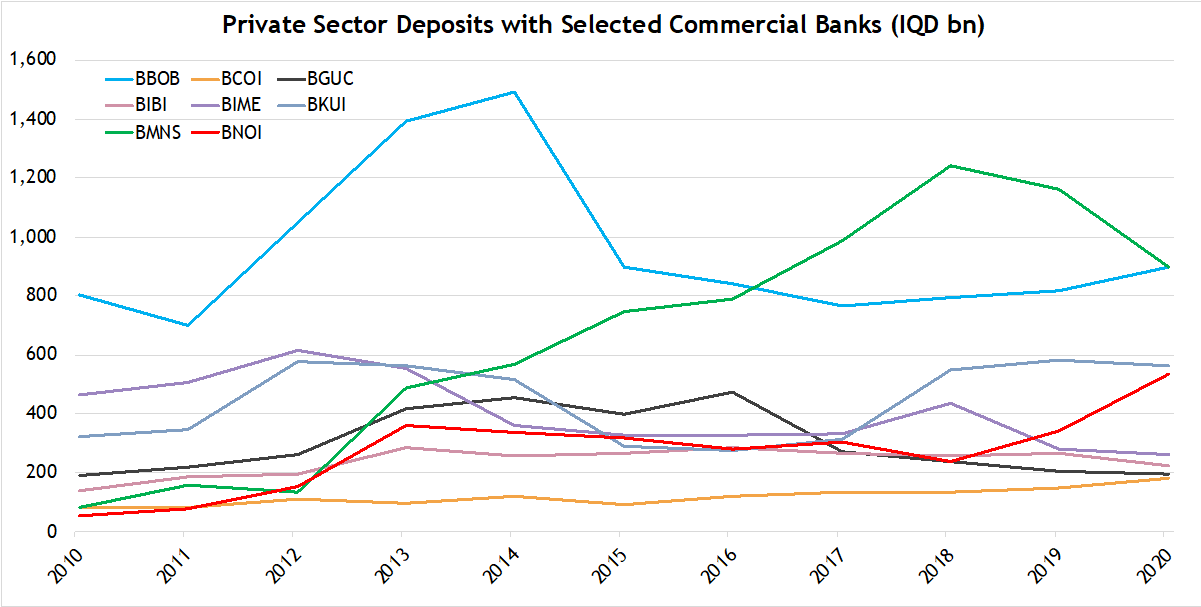 Among the top-quality banks, BBOB and BMNS stand out in terms of the size of their deposits in comparison to the other banks, and crucially between each other in terms of their different performances during and after the crisis reflecting their diverse circumstances; and the different post-crisis recovery strategies of each bank (more details for BMNS are provided in April 2019, and for BBOB in May 2019 and August 2020). However, among the top-quality banks BNOI stands out in terms of the consistently strong growth of its deposits which are up about 125% by end of September from the end of 2018 - far outpacing the growth of overall private sector deposits of 24% by end of July from the end of 2018 (more details for BNOI are provided in August 2020)

The picture in terms of the size and direction of the loan book of these selected ISX-listed banks is very different from that of their deposits, reflecting the different strategies pursued by each bank during the heyday of growth before the onset of the 2014-2017 crisis (chart below). The growth rate and size of each bank's loan book relative to its deposit base up to the crisis, and the associated risk-profiles, led to different non-performing loans (NPL's) behaviours during the crisis and the subsequent recovery trajectory. The picture from 2017 onwards, while no-longer negative, shows that while the conditions were in place for a recovery of the sector given the stability and gradual pick-up in deposits, the overall group is yet to begin loan growth. The exception is BNOI which has grown its loan book by about 281% from the end of 2018 to September, far outpacing the growth of overall private sector loans of 19% by the end of July from the end of 2018. Its loan/deposit ratio of 0.55x, while high in comparison to other top-quality banks in Iraq (BBOB at 0.16x, BMNS at 0.12x), is low enough to support continued growth in loans as long as they are paced by continued deposit growth. 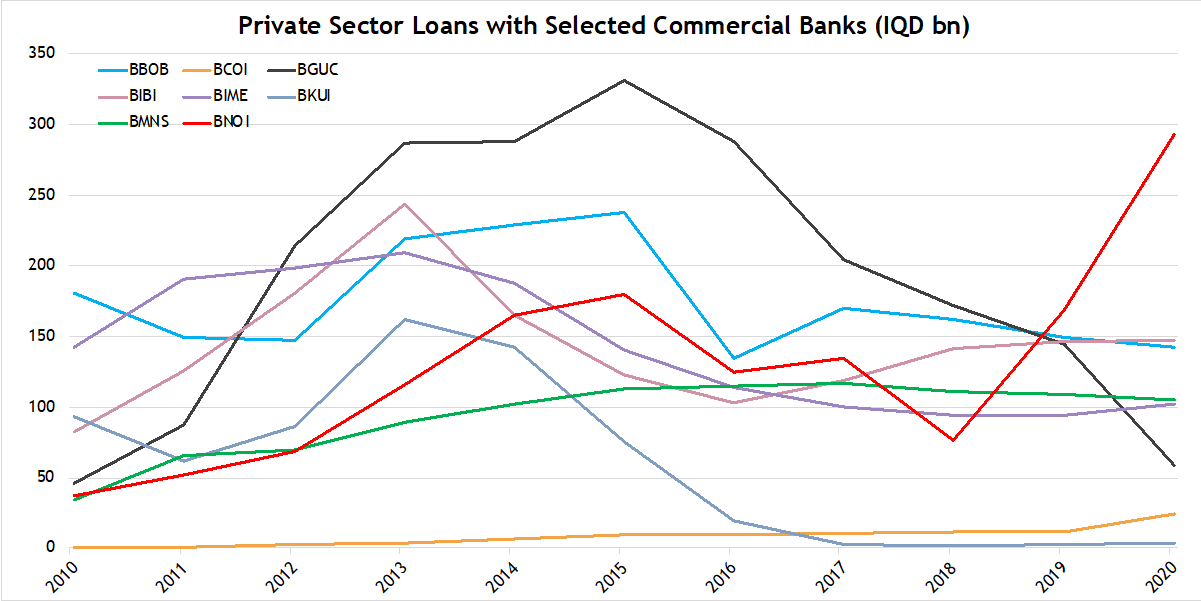 Price to book ratios of about 0.4x, 0.5x and 0.6x, and market capitalizations of IQD 100 bn, IQD 145 bn, and IQD 168 bn for BBOB, BMNS and BNOI respectively, reflect the performance of each company, in terms of the key metrics of private sector deposit and loan growth - as can be seen from the above charts (*). However, they also underscore the relative attractiveness of these stocks within the context of the Iraqi equity market that is at the tail end of a brutal five-year bear market. Which from a risk-reward perspective is attractive unlike other markets worldwide, most of which have had multi-year bull markets and would need to discount vastly different economic assumptions than those that led to their multi-year rises.

(*) Note: Using prices as the end of November 2020, and book values of latest reported quarterly data.