By Editor on 9th November 2020 in Ahmed Tabaqchali, Investment

The market, as measured by the Rabee Securities RSISX USD Index (RSISUSD), declined 1.6% in October, signalling a pause in the five-month recovery from the multi-year lows reached in April. However, in local currency terms the market was flat for the month, suggesting the current pause is likely to develop into a consolidation of recent gains.

The 32.2% five-month recovery from the April lows merely takes the market to just short of where it started the year - at the tail end of a brutal five-year bear market.

While the equity market's overly subdued tone in October was similar to that of the prior two months, adjusting for the disruptions to economic activity in the wake of the 40-day Arbaeen pilgrimage, the overall picture suggests a resumption of the multi-month gradual recovery in daily turnover from the lows seen during the big lockdown.

Encouragingly, the overall level of turnover was higher than seen during most of 2019 (chart below). 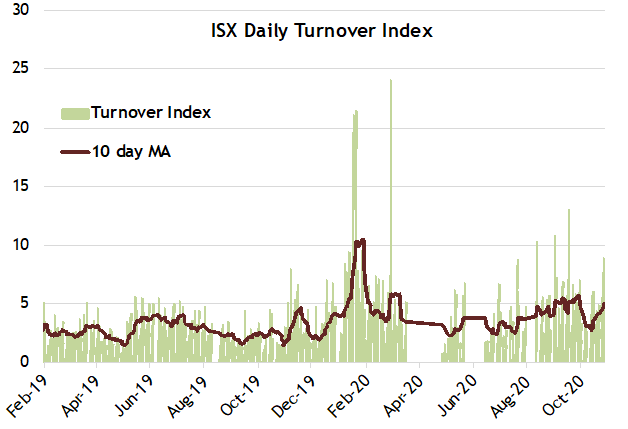 Foreigners were active participants in the equity market and continued mostly as net buyers, with the overall buying pattern in line with that of turnover as discussed in the prior paragraph. 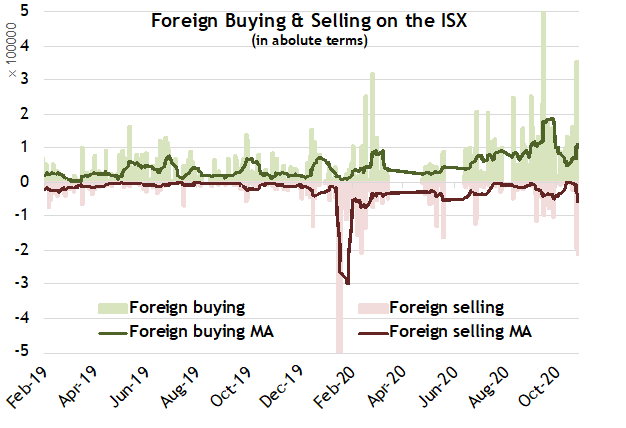 On the other hand, foreign selling, as a percentage of total selling, is yet to show a similar positive pattern, although it recovered from the increased levels seen earlier in the year. 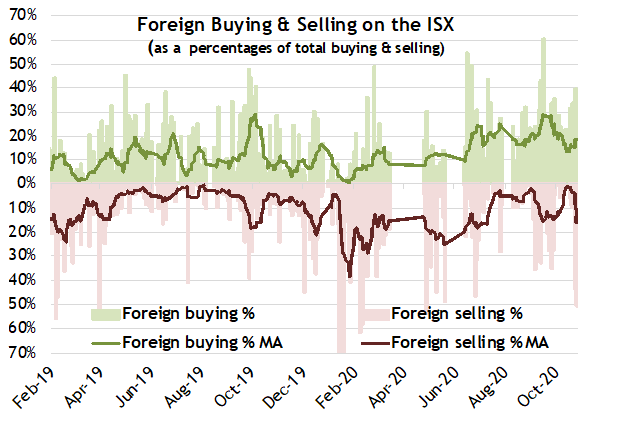 This consistency in foreign buying is especially positive considering the overwhelmingly negative narrative surrounding Iraq, and its economy following the decline in oil prices from the disruptions brought on by the COVID-19 pandemic, as well as the expectations of further weakness in the wake of the recent rolling lockdowns in much of Europe. While a few months do not make a trend, this foreign buying fits in with the thesis that Iraq's market has discounted pretty much all conceivable negatives, and thus, from a risk-reward perspective is attractive unlike other markets worldwide, most of which have had multi-year bull markets and would need to discount vastly different economic assumptions than those that led to their multi-year rises.

While too early to derive solid conclusions from the increased foreign activity, it coincides with the strong acceptance and support from Iraq's international partners for the government's economic reform program unveiled on October 13th, as the "White Paper". The support was announced during the Prime Minister's tour to France, Germany and the UK in late October, in which the UK and the World Bank took the lead in launching the Iraqi Economic Contact Group (ICGE), made up of the G7, the World Bank and the IMF to mobilise international support for the White Paper. The promising aspect of this programme is that it would require the country to embark on a real, home-grown economic programme as discussed in the White Paper which the international community would support and sustain.

Domestically the White Paper faces impediments, that range from execution challenges given the country's capacity constraints and the damage to its institutional infrastructure sustained over the last four decades of conflict, to the protracted local political dynamics which were explored in June in "Revisiting the Iraq Thesis, Five Years Later" - in particular:-

"The dilemma for the government is that on the one hand, the basic governing equations of Iraq's political system - which largely allowed the political elite to maintain their oversized influence on economic policies - are still in force, and as such the elite will likely derail real reforms that threaten their interests; while on the other hand, the rolling economic crisis means that alternative proposed stop-gap measures will not work for long and so reforms are unavoidable in the end."

Promisingly, local political dynamics are tilting towards an acceptance of the White Paper's reforms as Iraq's Finance Minister said in an interview, following the paper's release that: "There is less denial; before it was all denial."