By Editor on 5th April 2021 in Ahmed Tabaqchali, Investment

The market, as measured by the Rabee Securities RSISX USD Index, after February's explosive rally of 25.7%, took a breather and ended the month up 2.3%, and up 16.7% for the year. The market's 2.3% month-end gain masks an earlier gain of 11.0% by mid-month which would have taken it to a year-to-date gain of 26.7%, before profit talking scaled-down most this gain.

However, the passage of the delayed 2021 budget, after the market's close on March 31st, seems to have reignited the rally with the market up 6.9% over the following two days in response to the budget's expansionary spending plans ahead of early elections planned in October.

March saw a continuation and the sustainability of the same positive trends that drove the index's strong performance in February. Average daily turnover, excluding block transactions, continued the monthly increase - up 7% on the back of February's 189% increase over January, and up 135% over the average of the prior 12 months (first chart below).

It is somewhat early to draw too many conclusions from such positive trends from only two months of market action. Nevertheless, these trends reflect a very different tone to the market from that which prevailed over the last two years, as the two charts show. 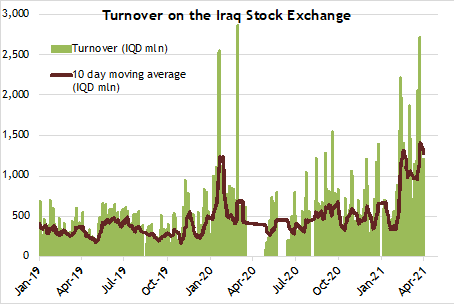 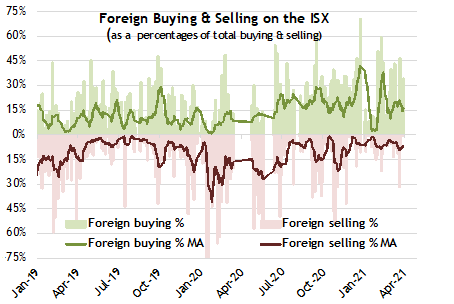 Moreover, just as in February, it was local buying that extended and sustained the rally throughout March, and similarly in response to the passage of the budget. February's stalwart trio of Bank of Baghdad (BBOB) up 69.2%, Baghdad Soft Drinks (IBSD) up 30.7%, and AsiaCell (TASC) up 24.6%, had mixed performances in March.

IBSD did not trade throughout the month, as it was suspended from trading while completing the procedures for its acquisition of Al-Zaki Group, as reported here in January. IBSD will resume trading on April 5th after announcing a 4.3% dividend yield in its latest annual general meeting (AGM). TASC ended the month down 3.0% after minor gains of 1.3% early in the month, while BBOB saw a continuation of February's blistering performance, up 21.2% by the Ides of March before profit taking reduced these gains into a loss of 1.5%.

Among the banking sector, low-priced Gulf Commercial Bank (BGUC) and Iraqi Middle East Investment Bank (BIME) were still up 17.6% and 26.3% even after shedding earlier gains of 35.3% and 57.9% respectively. February's laggards Mansour Bank (BMNS), and Commercial Bank of Iraq (BCOI) ended March flat and up 6.8% after peeling-off gains of 15.0% and 15.9% respectively.

The exception among February's laggards was the National Bank of Iraq (BNOI), which sustained its gains throughout month end, up 14.9% after completing its acquisition of the Iraqi branch network of Lebanon's Bank Audi, and announcing a 9.2% dividend yield in its AGM. Within the consumer space, Al Mansour Pharmaceuticals (IMAP), sustained its grains throughout the month, up 7.8% on the back of February's 15.2% gain.

These gains in the banking, consumer, and telecom stocks, both on that day and year to-date, build on the revival in economic activity that has returned to levels meaningfully above those that prevailed just before the nationwide lockdown in March 2020, as seen from Google's mobility data (below chart). In particular, activity in the crucial sectors of retail and grocery has recovered to between 20-60% above the levels that prevailed pre-lockdown. 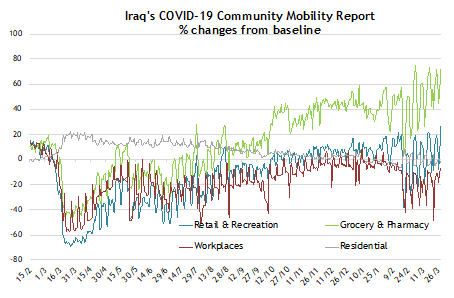 (Baseline is the median, for the corresponding day of the week, during January 3rd - February 6th, 2020,

Such revival can be seen from what looks like a resumption of Baghdad's construction projects, be they residential housing blocks, offices, or houses, as witnessed from the early days of a current visit to the city as can be seen from the pictures below.

Early morning view across the Tigris River from the Babylon Hotel in Baghdad. 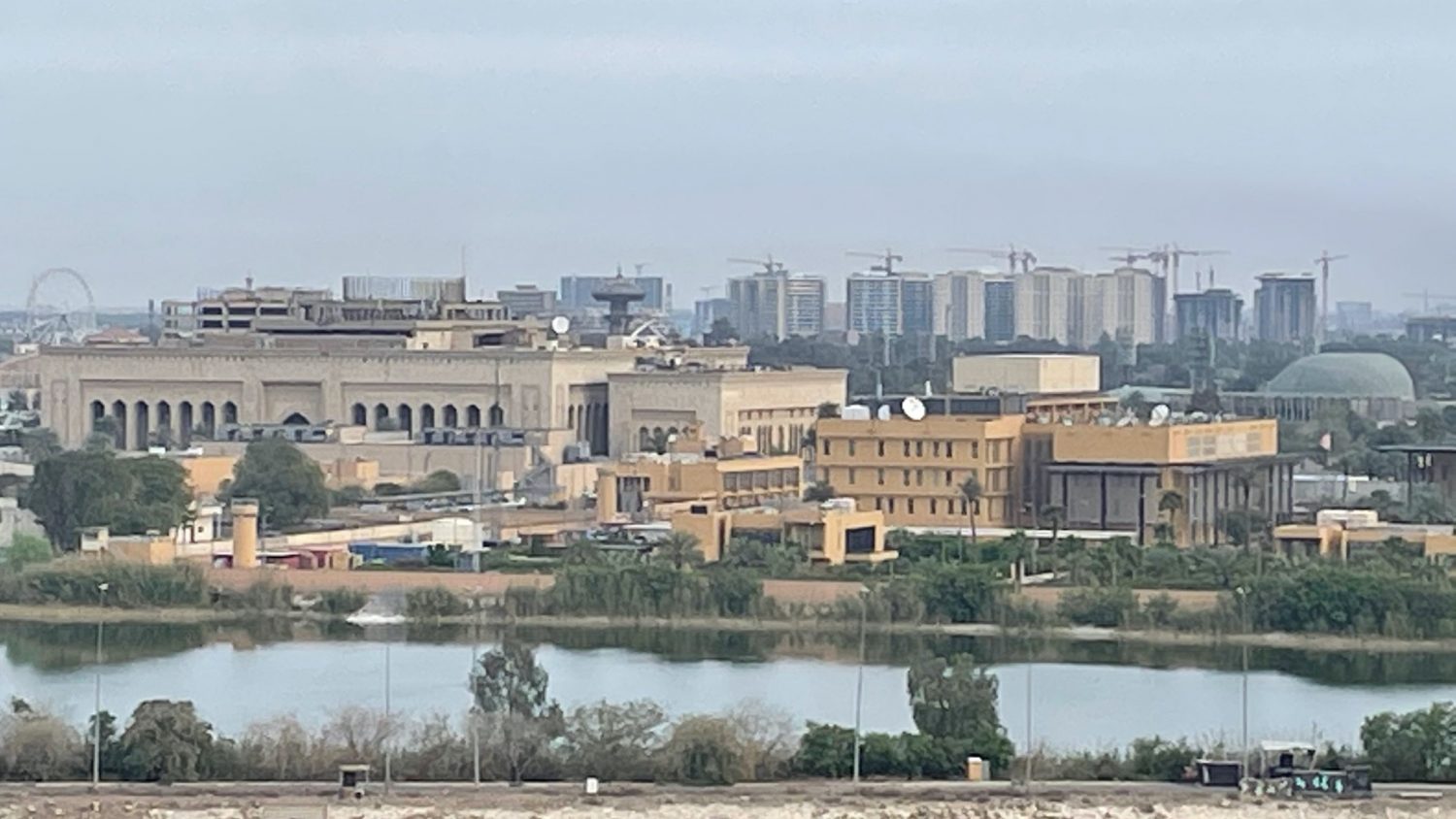 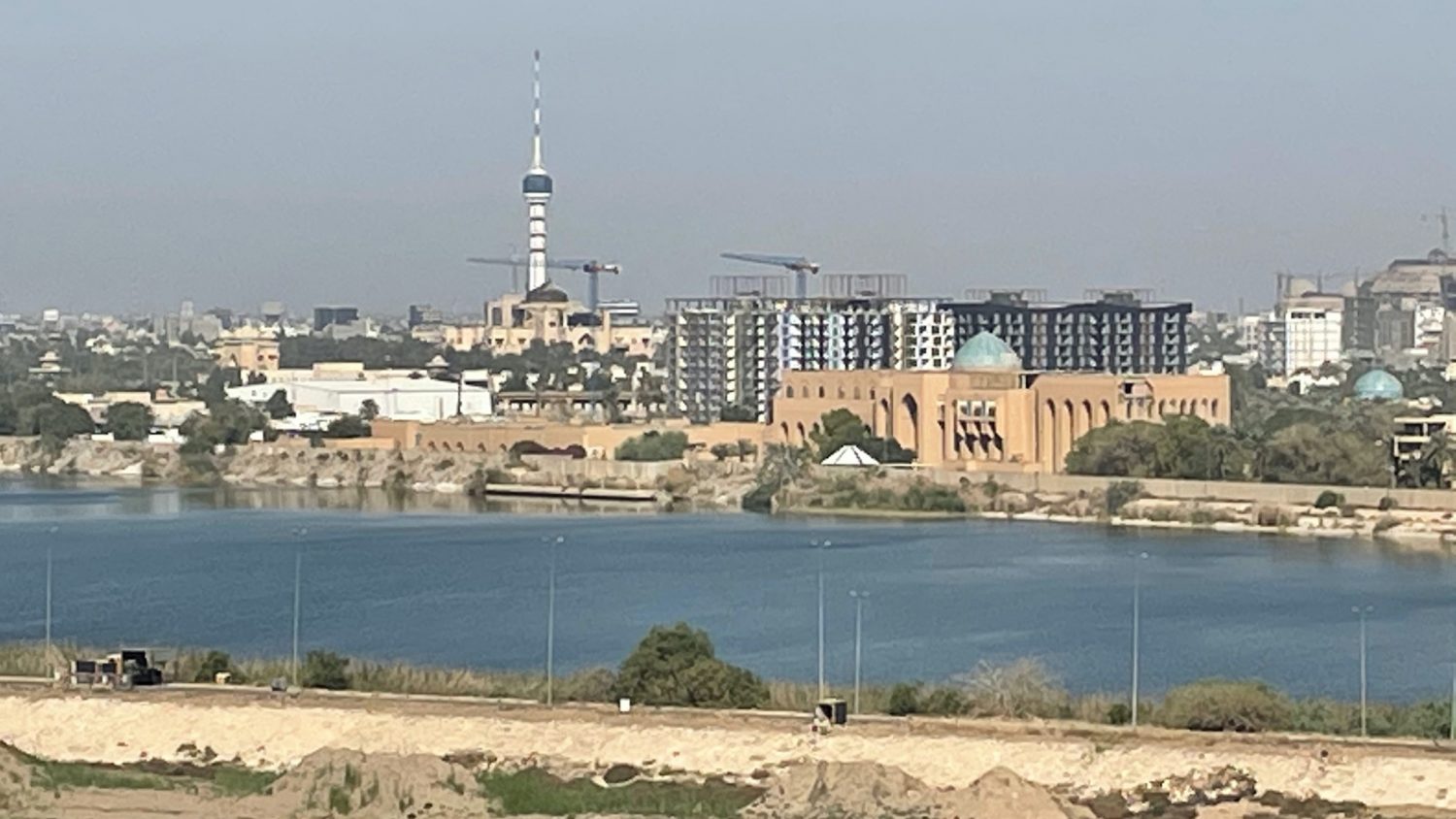 It remains to be seen if the market can sustain these early gains in April and beyond, though the broadening of the market's breadth beyond the narrow lead of February's trio is a promising sign for the rally's continuation and staying power.

But such a recovery's pace is likely to be uneven with plenty of zigs and zags along the way. Nevertheless, the potential upside from a continuation of such a rally is substantial for even accounting for the most recent gains, the market, as measured by the Rabee Securities RSISX USD Index, is still down over 60% from its 2014 high. 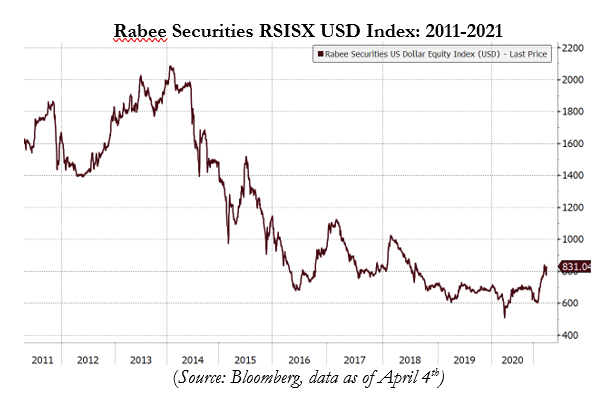