By Editor on 5th March 2021 in Ahmed Tabaqchali, Investment

The market, after January's 9.3% sell-off, resumed the rally that was ignited by the 22.6% devaluation of the Iraqi Dinar (IQD) against the USD in late December, ending February with a bang! The market, as measured by the Rabee Securities RSISX USD Index, ended the month up 25.7%, and is up 14.1% for the year.

February saw a resumption of the trends that drove the index's rally of 8.7% (in local currency terms) in the immediate aftermath of the currency's devaluation, in which both daily turnover and foreign buying increased meaningfully month-on-month.

However, the crucial difference this time is that these trends lasted the whole month, and their momentum was sustained throughout. Average daily turnover, excluding block transactions, increased 189% over the prior month and 145% over the average of the prior 12 months (first chart below). A similar pattern, but less dramatic, was the resumption of foreign buying in both absolute terms and as a percentage of total buying (second chart below). 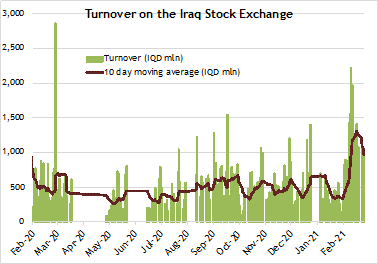 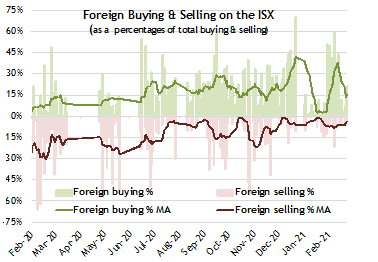 While foreign buying in the leading names in the banking, consumer, and telecom sectors initiated the rally, it was local buying that extended and sustained it throughout the month. In particular, the Bank of Baghdad (BBOB) was up 69.2%, Baghdad Soft Drinks (IBSD) was up 30.7%, and AsiaCell (TASC) was up 24.6% - these three stocks accounted for over 90% of the index's gain and for the bulk of the daily turnover in the market.

Among the banking sector, BBOB's rally was joined by the low-priced Gulf Commercial Bank (BGUC) in which 4 successive increases in the minimum trading increment resulted in a 21.4% increase in BGUC. Other leading banks lagged significantly, such as Mansour Bank (BMNS) which was up 5.3%, the National Bank of Iraq (BNOI), up 2.4%, and the Commercial Bank of Iraq (BCOI), up 2.3%. While IBSD was joined by Al Mansour Pharmaceuticals (IMAP), up 15.2%.

The initial post-devaluation rally in late December and the strong follow-through in February suggests that that the market is primed for a rally following a brutal seven-year bear market - that even after its February gain, the market, as measured by the Rabee Securities RSISX USD Index, is still down by over 63% from its 2014 high.

The market's narrow breadth notwithstanding, the fact that the gains were made by the leading names in their respective industries is promising for the rally's continuation. For such a continuation to be sustainable, it should unfold over the next few months and come with a broadening of market breadth as other stocks begin to contribute to the market's recovery from its deep downturn. However, this recovery's pace is likely to be uneven with plenty of zigs and zags along the way.

It was argued here, post the currency's devaluation that:

"While the devaluation is an adverse event, the reaction of the equity market and the increased foreign participation indicates that the change is positive for equities. While the missing pieces of Iraq's re-rating are many and will take time to materialize, this positive reaction to the devaluation suggests that the event might start the process of Iraq's re-rating - which from a long-term perspective is positive for the equity market."

Oil prices by the end of February staged a remarkable recovery of over 300% from the depths of the price collapse last April, in which the COVID-19 induced worldwide lockdown magnified an earlier crash in prices brought on by the price war between Russia and Saudi Arabia. This recovery was driven by the reversal of these same forces to hopes of a successful COVID-19 vaccination roll-out, and by extra production cuts over two-month of a further 1 mln barrels a day by Saudi Arabia, bolstering the remarkable cohesion of the OPEC+ agreement to cut oil production by an estimated at 12% of world oil supply last April 2020 - an agreement driven by self-interest and commercial logic just as was argued here last March soon after the initiation of the price war that:

"... while both combatants on paper have the resources to wage the price war, yet the effects of the 2014 price-war on both were profound which led to an unimaginable alliance in the first place. Given that effects of a new price war will be equally profound, it seems logical that political considerations will ensure that such war does not last, and that just as political reasons led to the price war, that subsequent ones will end it."

The availability of more than one effective vaccine for the COVID-19 pandemic bolsters the potential for a synchronised developed world economic recovery in the second half of 2021 and into 2022 - a recovery supported by unprecedented worldwide fiscal stimuli to the global economy, as well as continued adherence of OPEC+ to the production cuts - cuts that should last into year-end with a potential extension into 2022. This combination would argue for Brent crude prices to average in the range of USD 50-60 per barrel in 2021, and a range of USD 60-70 per barrel in 2022 - a case more promising than, but which nevertheless builds on the case made here in April 2020 that:-

"The known nature of the virus precludes a return to full normalcy when global lockdowns are expected to ease from mid-summer onwards. Combined with the unknown nature of the new normal as the world learns to deal with and ultimately contain the virus, the return to a pre-virus oil demand picture is unlikely within the next 12 months. But, in six to nine months demand for oil should recover from the extreme lows of April and trend upwards to a small drop from base-line demand by year end.

However, with a return to some sort of post-lockdown normalcy in early 2021, low oil prices should stimulate demand, and coupled with the massive worldwide fiscal stimuli to the global economy should begin to recover. Following a time-lag, as demand absorbs the stored supply, the supply-demand picture should be tilted in supply's favour, and oil prices will trend higher - likely to a price range of USD 45-55 per barrel for Brent crude." 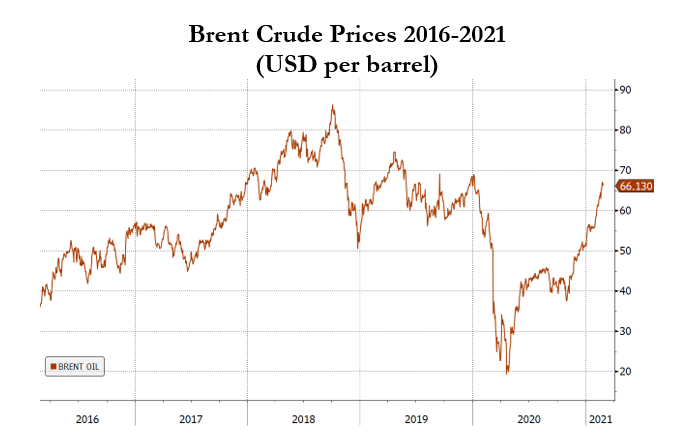 Such a scenario is extremely positive for Iraq and its equity market given the country's extreme dependence on oil revenues, which historically constituted over 90% of government revenues. Given the dominance of the economy by the state - as the largest formal employer, and through its direct and indirect control of the largest economic activities - means that higher oil revenues will feed into increased consumer spending and to a revival in said economic activities.

Such a revival will sustain the recovery in economic activities that have returned to levels meaningfully above those that prevailed just before the nationwide lockdown last March, as seen from Google mobility data (below chart). In particular, activities in the crucial sectors of retail and grocery have recovered to between 20-60% above the levels that prevailed pre-lockdown. The sharp decline at the end of February is due to the new rolling lockdowns from Friday's to Sunday's, cutting the workweek to four days, in response to the emergence of a potential new wave of the pandemic. 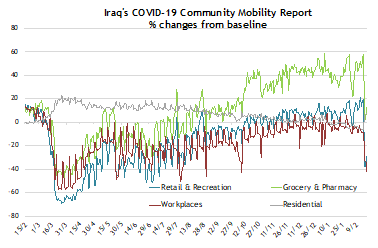 (Baseline is the median, for the corresponding day of the week, during January 3rd - February 6th 2020,

2 Responses to Market Review: "Market Roars Back to Life"