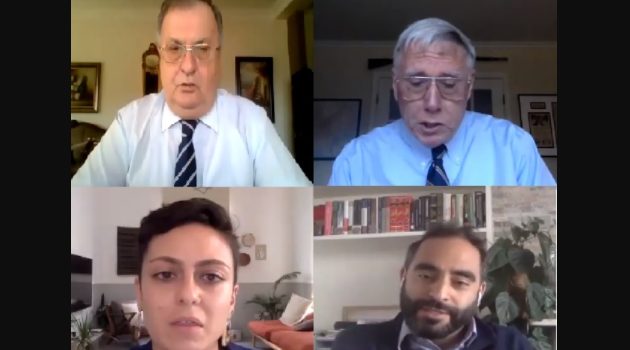 In a well-attended online seminar, with leading International and Iraqi businesses, Embassy officials and media, Professor Frank Gunter outlined some of the key points in his paper on Corruption in Iraq.

Hard estimates of at least 22% of people having to pay a bribe annually, and the systemic and petty corruption that has become endemic, his solutions focus on the economic supply side of corruption and the cost in jobs and opportunities that Iraqi is missing as a result of work and investment not being made.

In particular the requirement for Iraq to create at least 350,000 jobs a year just to halt unemployment from rising from its estimated 80% impact on unemployed or underemployed youth. Where jobs and opportunities are in short supply, the entry cost of getting one encourages bribes at all levels of public activity.

State bureaucracy and the awarding of political contracts could account for lost business in the region of at least $80bn since 2003 .

The application of state subsidies for large swathes of the economy that fail to provide sufficient capacity for demand, also encourage bribes for areas such as power, education, health and business facilitations. Ending subsidies and expansion in the private sector would help align demand with supply and reduce the requirement for bribery, whilst affording the poorest higher benefit payments, as would reducing the regulatory burden of starting, closing and running a company, particularly for SMEs.

Beyond the market supply of business regulation and capacity in the country Dr Renad Mansour, Fellow at Chatham house, made the devastating points that corruption starts with the whole political ecosystem of patronage and payments that ensure elected ministers and politicians have to repay their debts to their investors, while tribal loyalties and the role of a corrupt civil service weaken the power of politicians to change the system.

The key question is, 'Where do you begin to dismantle corruption in the system?' Ms Maya Gebeily , journalist, made the points that The judiciary is subject to payments, and if there is no trust in the law, the system fails. The role of writers, journalists can be significant in influencing attitudes to cultural corruption, and those that people listen to include both protestors and religious leaders, who can take a lead in influencing behaviours and attitudes.

Mr Shwan Aziz, chair, fielded many questions and points were made by the audience, including the request for more evidential data to back up aspertions - to which the panel made the point that its many of the things that don't happen, that should, must be factored into the impact of corruption, that it may be easier for large companies with resources than sme's who find regulations and corruption a stranglehold on growth.

For more information, please view the video of the session below:

Read the paper in English here