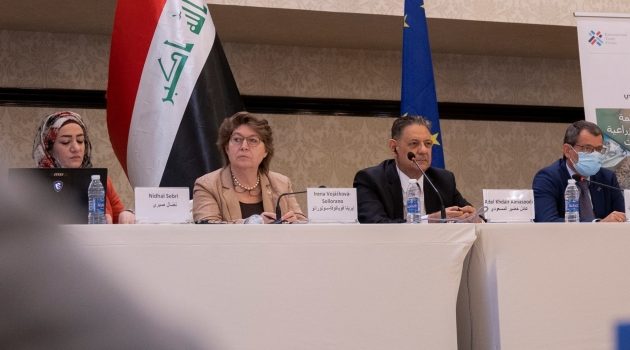 A workshop on "WTO Accession and Agriculture" was organised from 4th to 7th July 2021 in Baghdad.

Agricultural development consistent with WTO standards needs enhancement in Iraq for facilitating the negotiations leading to the accession process.

The workshop provided a comprehensive overview of the agriculture sector as perceived within the WTO and the Agreement on Agriculture and its pillars.

Representatives from various government institutions from Baghdad and the Kurdistan Region of Iraq including officials from the Ministry of Trade, Ministry of Agriculture, Ministry of Industry participated in the workshop.

The workshop was organized by the International Trade Centre (ITC) a joint agency of the World Trade Organization (WTO) and United Nations (UN), through "Strengthening the Agriculture and Agri-food Value Chain and Improving trade policy in Iraq (SAAVI)" project.

Funded by the European Union (EU), the project is contributing to inclusive economic growth and job creation, particularly for youth, by improving Iraq's agriculture competitiveness and supporting trade development. It is also particularly focuses on providing support to Iraq in the process of acceding to the WTO.

Mr. Adel Almasoodi, Director General, Foreign Economic Relations Department, Ministry of Trade opened the workshop and reaffirmed Iraq's commitment to the accession to the WTO and assured the support of his team to the SAAVI project.

Speaking on the occasion, H.E. Martin Huth, Ambassador of the European Union to Iraq said:

"The EU has a strong interest in Iraq acceding to the World Trade Organisation in order to bring Iraq into the illustrious WTO group of 164 states. WTO accession, and the economic reforms that it entails, represents a clear opportunity for Iraq to implement the goals of the White Paper.

"Being a full member of the WTO, will allow Iraq to improve its collaboration on trade and investment with all WTO members and ultimately support the creation of decent work for all Iraqis."

"The drive for economic reform, including political commitments in resuming the WTO accession process with a clear roadmap, is a clear signal of a better future awaiting Iraq."

The workshop included sessions from experts from WTO, Food and Agriculture Organisation of the United Nations (FAO) and the International Trade Centre. In addition the trade policy technical team from the International Trade Centre, Geneva, including Mr. Jean-Sébastien, Senior Officer for Policy and Business and Ms. Devika Rajeev, Associate Programme Officer, were present in Baghdad to facilitate the workshop.

This workshop is the first in a line of capacity building sessions that will be organised through the SAAVI project to support Iraq to accede to the WTO.