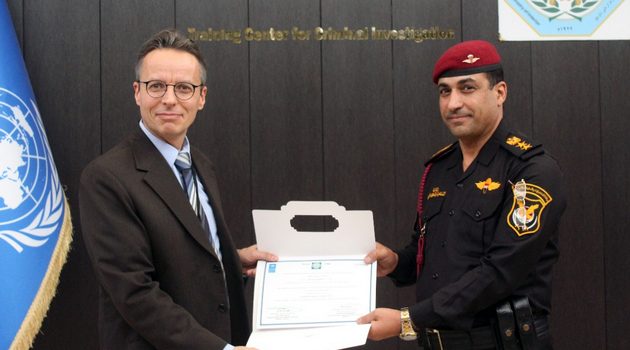 By Editor on 4th August 2021 in Iraq Education and Training News, Security

The United Nations Development Programme (UNDP) in Iraq has completed a series of special investigation courses for investigators of the Iraqi police service with support from Germany. Weekly and bi-weekly courses were held for senior police investigation officers on homicide investigations and suspect interviewing.

Homicide course attendants received professional insights on how to respond to homicide incidents where evidentially viable material may be present. Other topics of the course included the identification of information for potential forensic intelligence, the recovery of evidential material from a crime scene, and the production of written and pictorial statements for investigative judges and trial courts.

"The purpose of the training is to enhance the ability of police investigators to be pro-active and effective in utilising modern concepts and science to solve crimes." stated Major General Ziad Al-Abbasi, the head of the training and qualification directorate of the interior ministry.

"Germany supports the Iraqi police to become a people's service-oriented police service that is effective in criminal investigations, where victims and witnesses can have trust and thus are forthcoming to support investigations conducted by the police, and where the rights of suspects are respected, in particular during interviews and detention".

"Apart from training of only limited numbers of police officers in classrooms, those training courses will also be added to the e-learning platform that was set up jointly by the Iraqi police and UNDP. Policemen and policewomen from all over Iraq can thus soon attend the courses made available on the website www.iqshorta.com." said Zena Ali-Ahmad, UNDP Resident Representative.