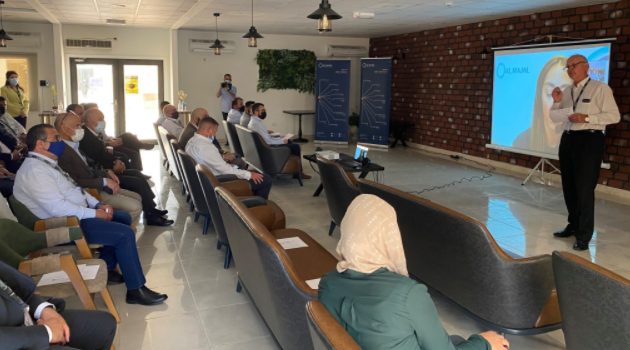 On Monday 16th August The Al Majal Business Park, Burjessia, generously held a lunch for IBBC members and friends, on behalf of IBBC. The lunch was hosted by Mr Richard Cotton and Mr Mohanad Al Khattab and around 40 guests attended.

Richard Cotton brought greetings from Baroness Nicholson and Christophe Michels (MD) which was succeeded by a presentation given by Al Majal. Following an excellent lunch in the dining room, members and quests mingled over coffee in the delightful coffee shop.

IBBC members appeared to be in optimistic mood, with companies having maneuvered their ways through Covid and now looking forward to an upturn in business supported by the rising oil price and improving business operating conditions.

In broader discussions, whilst business opportunities seem to be improving, many sectors are entering a mature phase and prices for services are being driven down by competition. For example, security vehicle hire, logistics camps room rates and professional services hourly rates are all down to about a third of what they were three or four years ago. Progressive companies are meeting this challenge by training up the Iraqi work force and percentages of expats in all companies are hugely down and probably running at no more than 10 per cent of the work force and work permits for expats are increasingly difficult to obtain.

Members report the banking sector remains extremely inefficient and unfit for purpose and the public sector bureaucracy remains a difficulty for many businesses. The Chinese have taken over much of the oil and gas sector to such an extent that the Government is trying to now limit that involvement and encourage other nationalities to remain, for example, Total from France appears to be currently winning work.

Governance issues remain challenging, but it now seems universally accepted that western companies, policed by their own governments will not tolerate subterfuge. Water and electricity supplies remain a challenge despite increasing capacity in the latter, but waste management and environmental issues are slowly rising up the agenda.

Companies feel increasingly relaxed about personal security, but all the major companies still insist on assisted travel which though as stated above is much cheaper than it was is still a huge unproductive cost for the country.