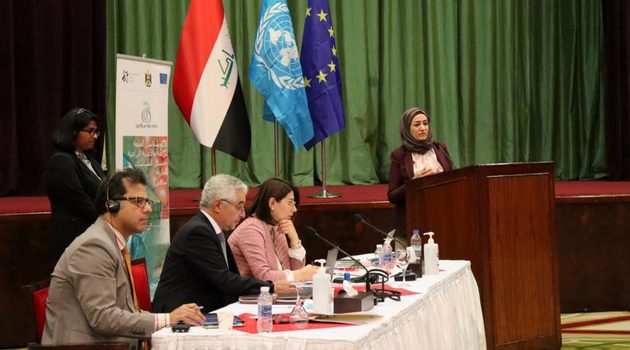 By Editor on 29th November 2021 in Iraq Industry & Trade News

The session  provided a comprehensive overview of the accession process and highlighted the crucial role of  the National Committee on WTO Accession in this process.

Iraq initiated its process to WTO Accession in 2004 but due to political and economic instability this was stalled until 2017 when Iraq expressed interest to reinstate their determination to join the WTO. Since then, Iraq has made considerable progress in this front including the recent submission of key technical documents to the WTO secretariat.

Representatives from various government institutions from Baghdad and the Kurdistan Region of Iraq including officials from the Ministry of Trade, Ministry of Agriculture, Ministry of Industry participated in the session. Various private sector institutions also attended.

The workshop was organized by the International Trade Centre (ITC) a joint agency of the World Trade Organization (WTO) and United Nations (UN), through the "Strengthening the Agriculture and Agri-food Value Chain and Improving trade policy in Iraq" (SAAVI) project.

Funded by the European Union (EU), the project is contributing to inclusive economic growth and job creation, particularly for youth, by improving Iraq's agriculture competitiveness and supporting trade development. It is also particularly focuses on providing support to Iraq in the process of acceding to the WTO.

Mr. Adel Al-Masoodi, Director General, Foreign Economic Relations Department, Ministry of Trade opened the day and reaffirmed Iraq's commitment to the accession to the WTO and assured the support of his team to the SAAVI project. In his opening remarks, Mr Al-Masoodi also recognised and congratulated the progress that has been made in Iraq's Accession progress through ITC's SAAVI project.

The delegation of the European Union to Iraq was also present at the event and was represented by Mr. Mauro Gioe, who stated that "becoming a member of the WTO will result in a reduction of trade barriers, predictability and transparency of international trade rules, and increased competitiveness, all of which will increase trade for Iraq" adding that  "the advantages gained by a new WTO member are always greater than the potential losses that some economic actors may initially face. Overall, the whole country wins".

On behalf of ITC, Mr. Rajesh Aggarwal, the Director of the Division of Market Development opened the session. In his remarks, Mr. Aggarwal focused on the importance of a strong National Committee in place to progress on WTO Accession. The National Committee provides a platform for both the public and private sector to come together and to take key  decisions in line with national priorities  and domestic policy reform," he said.

The workshop provided an opportunity to reassemble members of the National Committee on WTO accession, created 2004 through a ministerial order. Participants were updated by the Ministry of Trade of Iraq about the recent development which occurred in relation to Iraq's accession process to the WTO. This was followed by a number of technical sessions aimed at building a common understanding of all members with respect to substantive and procedural matters of immediate relevance for Iraq's accession to the WTO.

This session is part of a series of capacity building sessions that will be organised through the SAAVI project to support Iraq to accede to the WTO.