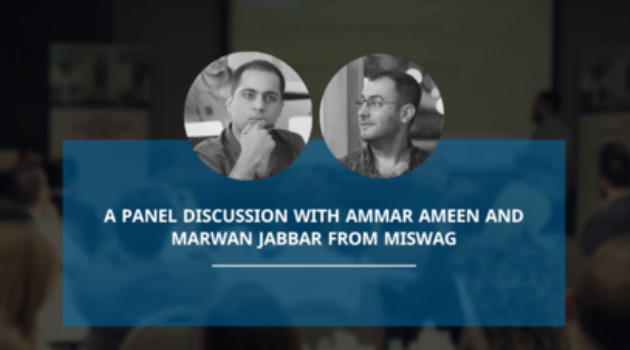 From Five One Labs. Re-published with permission by Iraq Business News.

A Panel Discussion with Ammar Ameen and Marwan Jabbar from Miswag

On October 27th, 2021, Five One Invest hosted a Speaker Series session with Ammar Ameen (Founder and CEO) and Marwan Jabbar (VP of Commercial Development and People) from Miswag. Read on to learn about Miswag's investment journey, the future of the Iraqi entrepreneurial scene, and the Iraqi e-commerce landscape.

Launched in 2014, Miswag is the first e-commerce marketplace platform in Iraq. Miswag aims to bridge the gap in online shopping by connecting Iraqi customers with trusted international brands. Its mission is to become the most innovative and efficient tech company in Iraq. Some of Miswag's key differentiators include guaranteed 24-hour delivery for orders in Baghdad. This multi-layered loyalty program is integrated with the Takaful initiative to give back to the community, in-house cutting-edge technology, and AI-driven and automated tools to overcome market-specific challenges.

In its latest funding round, Miswag raised over $1.6M on an undisclosed 8-digit valuation. Miswag will deploy the capital to scale its Iraq operations and accelerate its growth. This funding brings the total value raised by Miswag to nearly $3M since 2019.

Initially, Ammar started his career in academia, during which time he also partnered with development funds to support the private sector through tailored programs. After that experience, Ammar co-founded Easy Bites, the first Iraqi online food delivery app in 2012 before establishing Miswag in 2014.

Marwan Jabbar, previously the Director Of Operations of Careem in Iraq, is the VP of Commercial Development and People at Miswag. Marwan's work at Miswag focuses on marketing and business development, with an emphasis on the customer experience journey and ensuring customer satisfaction. Marwan explained, "I aim to ensure that Miswag is the preferred app for Iraqi shoppers and offers the best customer experience. We aim to give people original and trusted products and excellent customer service."

The most significant piece of advice from both Ammar and Marwan for any entrepreneur is: Just do it. They advise potential entrepreneurs to take a leap of faith and get to work. The problem faced by many entrepreneurs is fear of failure and risk aversion. In their opinion, entrepreneurs need to fail and learn from their failures. A startup might have all the right components: the idea, the money, and the team, yet the founders do not know how to launch. Many investors look for entrepreneurs with previous experiences and even experience in failing, because with that experience comes knowledge and maturity.

Most companies are in their infancy when receiving the first round of investment, so the best indicator for future success is the leadership and team. The advice to founders is to focus on marketing themselves (versus the company), specifically in the early stages. Investors are investing in the potential of the leadership and the team and not in the business itself.

Another matter to keep in mind is the company's books. Generally, founders focus more on product development and less on their bookkeeping, profit and loss statements, and financial reports. Investors expect clean books. Founders need to prepare for any questions relating to the company's financials because during presentations, a focal point for investors, other than the team, is ensuring that the company's financials are in order. Thus a vital piece of advice is keeping the books clean from day one.

Miswag has navigated its share of obstacles since its founding in 2014, particularly when it comes to fundraising. Institutional and angel capital were largely nonexistent until quite recently in Iraq, so Miswag employed a disciplined growth strategy while competing with new, better-funded regional market entrants. In 2019, that persistence and success paid off when Miswag received its first round of investment from Iraq Tech Ventures.

Miswag's fundraising challenges included macro considerations such as the often unstable political situation in Iraq, in addition to more typical concerns such as proving its business model could work in Iraq. These environmental deterrents, although not entirely resolved, are no longer overarching barriers to investment. Miswag successfully raised its first round of investment after many failed attempts. Ammar mused, "After raising the first round, the second and third rounds become much easier. One of the most important challenges when fundraising is the issue of trust. We gained trust after the first round of investment."

The investment rounds were not easy. The approximate time required from start to finish for a successful round is six months of negotiations, preparation, and documentation. Raising capital is a full-time job. It necessitates a lot of effort, hard work, and dedication. Ammar explains, "Personally, the amount of time I have for actual company operations decreased a lot. I spent most of my time focusing on the investment round. I left the daily operations to the team."

Most funding negotiations among investors and founders revolve around the issue of valuation. There are two important factors taken into account. First, the valuation of comparable companies in the same or similar industry can provide a general range. Miswag researched e-commerce companies based in other markets such as the GCC, Jordan, and West Asia to analyze their valuation multiples. Second, Miswag closely examined its company's profits, revenues, monthly growth rate, and yearly growth rate among other financial metrics. The final step in the process is reaching a consensus between founders and investors on the valuation figure. Agreeing on a figure is contingent on two factors. The first is which valuation model to apply. Most startups will use the multiples of revenue approach for evaluating their market value. The second factor is agreeing over the multiplier. Based on all of the above steps, both parties agree on a mutually accepted valuation figure.

The Iraqi entrepreneurial ecosystem faces several challenges, one of which is the infrastructure. When it comes to e-commerce, the infrastructural gaps revolve around issues related to logistics and distribution, B2B and B2C last-mile delivery, and e-payment solutions. The Iraqi youth, the tech sector, and the private sector are proposing quick and efficient solutions.

In the last five years, the Iraqi e-commerce market has witnessed a proliferation of players. The competition is heavy and healthy, forcing market players to up their game. Iraqi internet-enabled businesses have one common goal: promoting trust among Iraqi consumers. Through outstanding customer experience and service, e-commerce players want to encourage adoption and retention. However, if a business breaks the trust, it negatively impacts the whole sector which leads to a lack of confidence in internet-enabled businesses.

Marwan believes that "To attract good talent, we need to have a good company culture. People need to want to work with us." Employees pursue experiences that will allow them to develop their careers and make them feel excited about going to work. Miswag's employees specifically seek learning opportunities, career trajectories, skill development, and benefits. Miswag is working on two fronts to build a culture that allows for differences, has dynamic internal systems, and has formal procedures.

First is hiring for potential, thus circumventing the issue of identifying talent with the relevant skills and experiences. The second is creating an environment that promotes and encourages learning and growth. Creating a suitable working environment ensures that Miwags promotes the next generation of managers internally.

Currently, Miswag's deployment of funding will endeavor to increase its product offering and number of vendors. Consumer demand is high, yet the supply is lagging. Miswag will expend its capital on product offerings and infrastructure advancements to ensure that new products and brands are available to the Iraqi market. Additionally, Miswag needs to resolve the infrastructural gaps hindering the e-commerce industry. Thus, a significant portion of the capital raised will be utilized to improve fulfillment services. The company is committed to improving logistics by applying international warehousing and fulfillment best practices and the use of advanced technology. And, of course, Miswag will continue adding talented team members to continue strengthening the backbone of the company.

Marwan and Ammar predict that the Iraqi entrepreneurial ecosystem will witness an upsurge of investment and startups. The startups will expand to new regions and will offer added services. The Iraqi market will also see an influx of international and regional venture capital. Marwan notes, "More than once in the past months, international investors have reached out to me because they are interested in Iraq. Iraq is currently on international investors' and companies' radar." There is a robust list of regional businesses establishing offices and teams in Iraq. Marwan predicts that "This will benefit all of us. The competition will force companies to improve their performance. It will have a positive impact on individuals and companies in both direct and indirect ways."