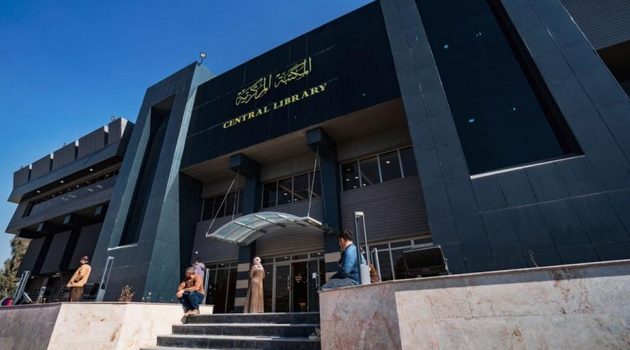 By Editor on 21st February 2022 in Construction & Engineering In Iraq, Iraq Education and Training News

The newly-rehabilitated Central Library at Iraq's second-largest university, Mosul University, was officially reopened today by the United Nations Development Programme (UNDP), the Federal Republic of Germany and the Ninewa Governorate.

Mosul University's Central Library, once a center of knowledge and culture, was left in ruins by Islamic State of Iraq and the Levant (ISIL). Founded in 1921, the Library became known as one of the richest libraries in Iraq, second only to the central Library in Baghdad.

It was a hive of activity and housed close to one million resources. During ISIL, it was bombarded by missiles and badly damaged, burning an estimated 8,000 to 10,000 books and manuscripts.

The two-storey Library is next to the bustling Student Centre and recently reopened Theatre Hall. It can seat over 1,000 students at once and has the capacity to house over 100,000 books. The Library comes with dedicated spaces for studying, meetings, computers, and exhibitions.

Also reopened today was the Ninewa Federal Court of Appeal based in Mosul which holds the court of appeal, personal status court, tort court, investigation court, domestic violence court and first instance court. The purpose-built facility will house 50 judges, 300 administrative staff and 50 security personnel. The six courts will have the capacity to handle around 7,500 cases every month.

"The reopening of the Central Library and Ninewa Federal Court of Appeal is an important milestone in the journey to revitalizing this iconic city. Due to the city's historical importance and devastating destruction under ISIL, UNDP prioritized its stabilization and rebuilding efforts in Mosul. I am proud that today, the number of students at the University has surpassed enrollment rates before ISIL occupation by over 40 percent. This shows the strength and resilience of the city - one that's well on its way to recovery after years of conflict," said UNDP Resident Representative in Iraq, Zena Ali Ahmad.

UNDP's Funding Facility for Stabilization (FFS) rehabilitated the Central Library with financial support from the Federal Republic of Germany, provided through KFW Development Bank. The facility was furnished with support from the Netherlands. The rehabilitation of the Ninewa Federal Court of Appeal is also funded by the Federal Republic of Germany, and furniture for the facility is provided by Australia.

"We would not be here today if not for the support of one of our longest-standing partners, the Federal Republic of Germany. Together with Germany, we have made tremendous contributions to stabilization in Iraq. I would also like to take the opportunity to thank the Netherlands and Australia for furnishing the Central Library and Ninewa Federal Court of Appeal. This combined effort only goes to show that we will continue to work together to support the people of Iraq build forward better," added Ms. Ahmad.

"Speaking to people in Mosul I understand how much it means to them that two central places of community life have risen like a phoenix from the ashes. Germany is pleased to have contributed to the rehabilitation of Mosul University's Central Library because we want the youth in Iraq to be able to build up the knowledge and skills needed to shape Iraq as a stable, sovereign, united, democratic and inclusive country. Likewise, the rehabilitated Court sends a reassuring signal that, despite all the devastation endured by Moslawis, in the end, the rule of law prevails," said Chargé d'Affaires a.i. Peter Felten, German Embassy Baghdad.

"We are very pleased that KfW Development Bank on behalf of the German Government was able to provide the financial support for rehabilitating the Central Library. It is a great pleasure to witness the reopening of this facility and we look forward to seeing this important centre of learning used for exchange and interaction enriching the cultural and academic life at the University," added Dr. Anna-Christine Janke, Country Director of the KfW Office Iraq.

One Response to Reopening of Mosul University's Central Library