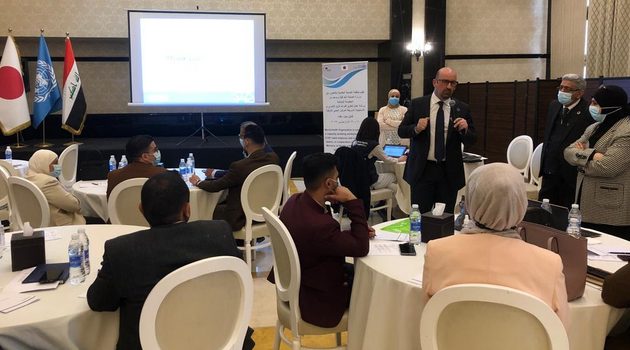 The World Health Organization (WHO), in cooperation with the Ministry of Health in Iraq, concluded today a three-day workshop aimed at building the capacity of the country's rapid response team (RRT) in field investigation and response, with an emphasis on the recent outbreak of Crimean-Congo haemorrhagic fever (CCHF).

The workshop, organized in collaboration with the Government of Japan, targeted 42 participants, including physicians, veterinarians, lab technicians, health workers and zoonotic diseases investigators from 13 Iraqi governorates.

"Rapid response teams constitute a pillar in human security and have contributed to containing outbreaks of epidemic- and pandemic-prone diseases in Iraq and beyond. This training, which used CCHF as a case study, will further equip the RRT with knowledge and capacities to control any future outbreaks of this anthropo-zoonotic disease in Iraq and regionally," said Dr Ahmed Zouiten, WHO Representative in Iraq.

"We are very grateful for the collaboration with the Government of Japan, which enabled us to conduct this important training workshop and are looking forward to further collaboration to strengthen health security in Iraq. We're also pleased with the effective cooperation between the Ministry of Health, Ministry of Agriculture and WHO to tackle this disease," he added.

During the workshop, experts from the WHO Regional Office for the Eastern Mediterranean and WHO country office in Iraq discussed the national zoonotic disease preparedness and response plan in the context of One Health.

The team delivered various presentations focused on infectious hazard prevention and preparedness, including rapid risk assessment, case management, risk communication and community engagement, data management, and report writing. Working group exercises followed each of these sessions, with participants divided into multisectoral teams similar to the constitution of RRTs in the field.

The CCHF virus is transmitted to people either by tick bites or through contact with infected animal blood or tissues during and immediately after slaughter. Most cases have occurred among people working in the livestock industry such as agricultural workers, slaughterhouse workers and veterinarians.

The disease has been endemic to Iraq since 1979, with few sporadic cases reported across the country. At times, small outbreaks have been reported, with the last outbreak happening in 2021 with 18 cases confirmed in Thi-qar and Ninawa Governorates.

WHO provides Medical Supplies to KRI for COVID-19 response