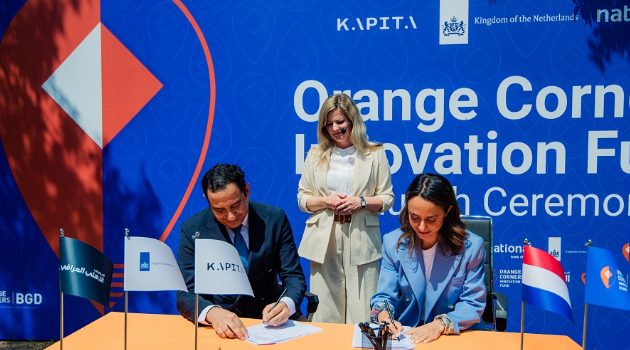 KAPITA, a leading private sector development company, has signed a Memorandum of Understanding with the National Bank of Iraq (NBI) to launch the Orange Corner Innovation Fund (OCIF) in Baghdad.

On Wednesday 27 April KAPITA held an event to mark the signing of an MoU with NBI.

The event was attended by her excellency Liesje Schreinemacher, the Minister for Foreign Trade and Development Cooperation of the Kingdom of Netherlands, Michel Rentenaar, the Ambassador of the Netherland Embassy in Iraq, Isam Samara the Director of Marketing & Corporate Communications of Capital Bank of Jordan, and Mr. Omar Faleh, Director of Communications and PR at Asiacell.

The MoU was signed by Mujahid Waisi, CEO of KAPITA, and Nuha Abujaber Director of Special Projects, NBI - Chairman's Office. The signing marks the launch of the OCIF Baghdad, a EUR 1 million fund that will be used to support businesses entering the Orange Corners Baghdad program with financial assistance and training. OCIF Baghdad will be implemented by KAPITA with NBI being the banking partner for the program. The OCIF program is funded by the Ministry of Foreign Affairs of the Kingdom of the Netherlands.

The Minister congratulated both KAPITA and the NBI and expressed her support for the collaboration. The Minister highlighted that OCIF will build on the success of the Orange Corners Program and further highlight the Kingdom of Netherlands support to build a robust private sector in Iraq.

KAPITA will offer skills workshops and one-on-one coaching sessions to nearly 100 entrepreneurs, participating in the Orange Corners incubation programme in Baghdad. After completing the six-month programme, incubatees will be selected to receive additional financial assistance from OCIF and continued business support over the next three years. This will be done in close collaboration with the NBI.

OCIF is an additional programme to Orange Corners. It aims to stimulate innovation and improve access to finance for entrepreneurs in Africa and the Middle East.

The fund will address a critical gap within the emerging Iraqi entrepreneurial scene where funding options are limited and mostly focused on businesses at later stages. Mujahid Waisi, CEO of Kapita, commented:

"OCIF will strengthen our ability to support early stage businesses in Iraq, providing them with the funding and training they need to become investment ready".

"We are very happy to support such an important initiative to support young Iraqi entrepreneurs and businesses, it aligns with our goal to be the right banking partner to all Iraqi startups".

OCIF will support the incubatees graduated from the Orange Corners (OC) Baghdad incubation programmer, which is run by KAPITA and funded by the Ministry of Foreign Affairs of the Kingdom of the Netherlands. Grants soft loans and a set of investment readiness training will be offered to the entrepreneurs.

The program will be available for both new as well as previous cohorts of OC Baghdad.