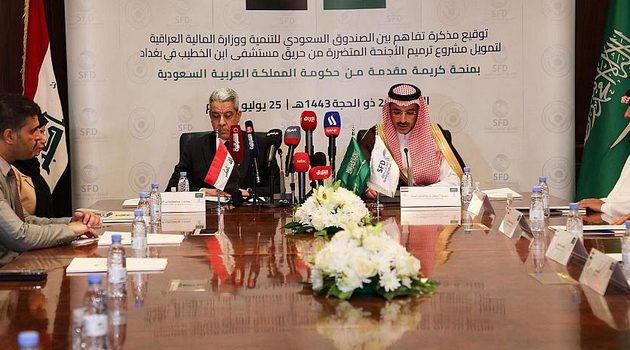 By Editor on 29th July 2022 in Construction & Engineering In Iraq, Healthcare

Iraq and Saudi Arabia have signed a memorandum of understanding (MoU) regarding the allocation of a grant from the government of Saudi Arabia to finance the renovation of Ibn Al Khatib Hospital in Baghdad.

The Saudi embassy initially announced its support for the hospital last year, following a fire that killed at least 82 people, and left more than 100 injured.

The grant will be provided through the Saudi Fund for Development (SFD).

During the meeting, Iraq's Ambassador to Saudi Arabia, Dr. Abdul Sattar Hadi Al-Janabi, praised the critical role played by the Kingdom through the SFD in supporting the health sector and the infrastructure in Iraq. He highlighted the importance of the present project in enhancing the livelihood of many Iraqis and their access to essential health services.

According to the official Saudi Press Agency, the Kingdom has allocated $1.5 billion for soft loans through SFD to support development in Iraq.