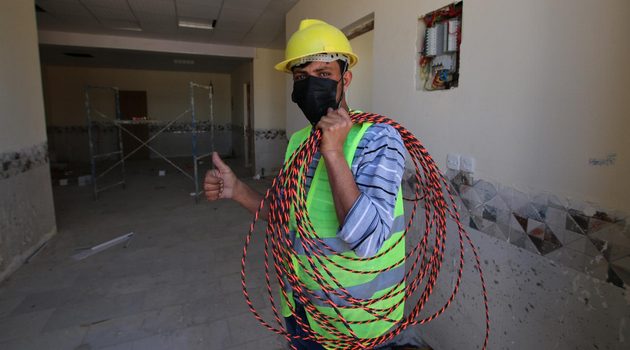 The Republic of Korea has made a new contribution of US$450,000 to the United Nations Development Programme (UNDP) Iraq's Funding Facility for Stabilization (FFS), which supports stabilization, durable solutions, and the safe return of internally displaced Iraqis in the five governorates liberated from the Islamic State of Iraq and the Levant (ISIL).

This brings Korea's total support to the Facility to over US$26.9 million. Korea's previous contributions have supported the implementation of 91 critical projects in the liberated areas, benefiting more than 1.14 million people.

"We are grateful to Korea for this timely contribution. With the Facility transitioning in 2023, the remaining stabilization needs are estimated at around US$200 million across the five governorates of Anbar, Diyala, Ninewa, Kirkuk, and Salah al-Din. We believe that continued support is critical to secure Iraq's still-fragile stability," says UNDP Resident Representative for Iraq, Zena Ali Ahmad

"We are thankful for the continuous support Korea and the international community has shown in UNDP's ability to deliver at the highest quality and speed. The Facility has mobilized over US$1.5 billion from 30 donors and the Government of Iraq to date. This collective effort demonstrates the international community's solidarity with its Iraqi counterparts," adds Ms. Ali Ahmad.

"Korea and Iraq share many similar historical trajectories such as civil war, dictatorship, and under-development. Therefore, the Korean government and the Korean people have always been making the best efforts to share their development experience with Iraq. UNDP's Funding Facility for Stabilization has been a vehicle of critical importance in the past post-ISIL rehabilitation phase, and the Korean government has been proud of being a part of such global solidarity. We will continue to engage with all relevant partners, most importantly the Government of Iraq, to further the cause," says H.E. Sungsoo CHOI, the Ambassador of the Republic of Korea to the Republic of Iraq.

In mid-2015, UNDP established the Funding Facility for Stabilization to assist the government in rebuilding Iraq after the ISIL conflict. The Facility works with the Government of Iraq and local actors to ensure safe, dignified, and voluntary returns and to lay the foundation for successfully reintegrating displaced populations into the community in areas liberated from ISIL.

To date, the Facility has completed 3,278 projects across the five liberated governorates of Anbar, Diyala, Kirkuk, Ninewa, and Salah al-Din. This critical stabilization support has facilitated the return of 4.9 million displaced Iraqis to their areas of origin.