By Editor on 7th November 2022 in Ahmed Tabaqchali, Investment

Banks and the Predictability of Earnings

The market, as measured by the Rabee Securities RSISX USD Index, which over the last two months discounted and looked through the violence and political impasse, took a breather after its resolution with the formation of the new government on October 27th - 12 months after the October 2021 parliamentary elections.

The market's 3.4% decline for the month, and up 1.5% for the year, took it towards the lower end of its two-year up-trending channel (chart below), which still supports the market's positive technical picture. The macroeconomic fundamentals discussed here five months ago argue that the market's two-year uptrend will likely remain in force.

However, its upward slope might moderate, or even go sideways, as the liquidity injection -a consequence of the passage of the supplementary budget - works its way through the economy and eventually into the equity market.

As such the government's need to gain public support and legitimacy implies that it will likely adopt populist policies through an expansionary budget for 2023 that would take advantage of high oil prices - a point that was discussed in "2021 Review and Outlook for 2022" in that any government formed will seek legitimacy through populist policies.

Ultimately the new budget will sustain and re-enforce the current consumer-led economic rebound into a more sustainable economic growth, which in turn should lead to a continued growth in corporate profits. 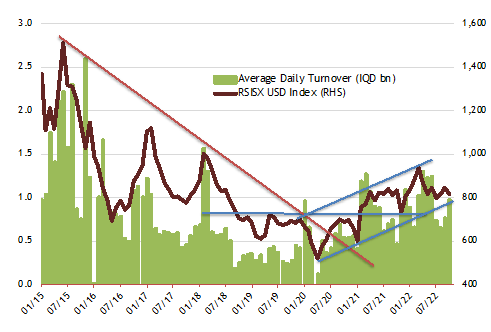 The Bank of Baghdad, and the Predictability of Earnings

The investment thesis for Iraqi listed banks was reviewed in "Banks & the Iraq Investment Thesis" which is based on the opportunity for the group to grow earnings multiple times from current levels as the country moves towards a full adoption of banking and away from the dominance of cash as both a store of value and a means of economic exchange. Moreover, over time, as banks' earnings grow substantially, this should lead to meaningful increases in their valuations.

The 2014-2017 financial and economic crises brough about by the ISIS conflict and the fall in oil prices, ended the multi-year economic expansion, and the pains of the crises exposed both the structural weaknesses of the banking sector as a whole as well as those of the individual banks. Management of each of these banks pursued different strategies to address these structural weaknesses, and the subsequent growth trajectory that is reflected in the progression of their earnings. At opposing ends of each of these strategies are those pursued by two of the top five constituents of the of RSISX USD Index: the Bank of Baghdad (BBOB), and the National Bank of Iraq (BNOI) - BNOI was reviewed here in "The Opportunity in Retail Banking", while the current piece reviews BBOB.

BBOB's size as one of the largest private sector-owned commercial banks - in terms of deposits, assets, and branches across the country - made it one of the most leveraged banks to the expansion of credit during the economic boom years up to 2014-2015. As such the 2014-2017 crisis stressed its balance sheet to the limit following its heady expansion during the boom years as first discussed here in "Frenzies and Market Bottoms" in August 2018. The bank's strategy to address its structural weaknesses and vulnerabilities, and then to grow, was put in place by its new management team in mid-2016.

This strategy was based on repairing the bank's balance sheet through holding back on loan issuance, adopting a conservative stance to its risky assets by taking appropriate provisions, holding high quality liquid assets, and concentrating on servicing its blue-chip customer list. This strategy in action from 2017 to the third quarter of 2022 (Q3/2022) can be seen firstly from the 43% decline in BBOB's loan book (green column in chart below); and secondly from the 588% growth of BBOB's holdings of Government of Iraq's (GoI) bonds (domestic bonds in Iraqi Dinar (IQD) and Eurobonds in USD) and Central Bank of Iraq's (CBI) T-bills (i.e., financial assets in the maroon column in chart below). Cash remained high through the period with a 9% growth rate (grey column in chart below). Crucially, BBOB grew its customer deposits by 65% during the period as it maintained, and meaningfully grew its customer base (pink column in chart below). 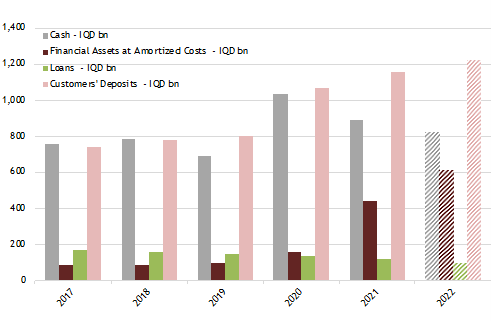 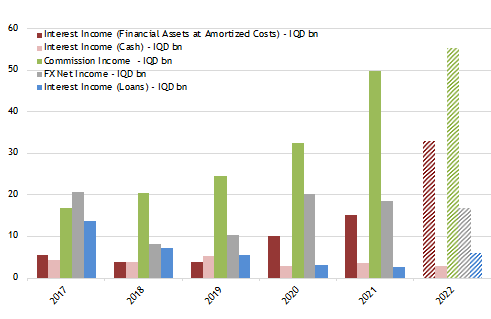 Bank of Baghdad: Profits and Provisions 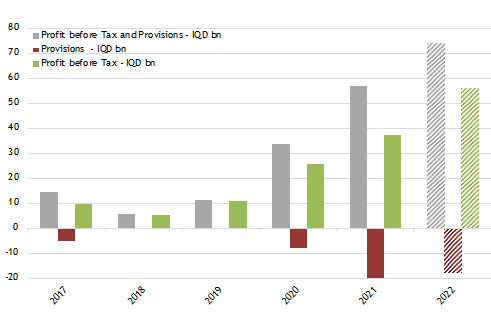 The current consumer-led economic rebound, likely to be accelerated by the introduction of the new government's expansionary 2023 budget as argued above, should accelerate the growth in BBOB's earnings through the growth in its fee income - commissions and foreign exchange that are correlated with economic growth. Moreover, the economic recovery could have positive effects on the nature of its non-performing assets and thus bring forward the end of provision taking - which have likely peaked this year and initially expected to be over by 2023-2024.

Encouraged by the significant growth in earnings over the last two years, BBOB in mid-October announced the resumption of dividend payments, yielding at the time 3.6%. Should earnings continue to grow, as hoped for in 2022 and 2023, then a further dividend announcement is likely to be made next year and dividends might grow in-line with earnings growth.

This review is not a detailed company analysis discussing all aspects of the bank, instead it is meant to highlight the Bank of Baghdad's (BBOB) strategy for recovery from the pains of the 2014-2017 crisis, and for subsequent growth; it is not meant to be construed as individual investment advice or a recommendation or solicitation to buy, sell or hold shares in BBOB. Full details on the Bank of Baghdad, are available on the Iraq Stock Exchange (ISX)'s web site, and research reports are available from Rabee Securities. 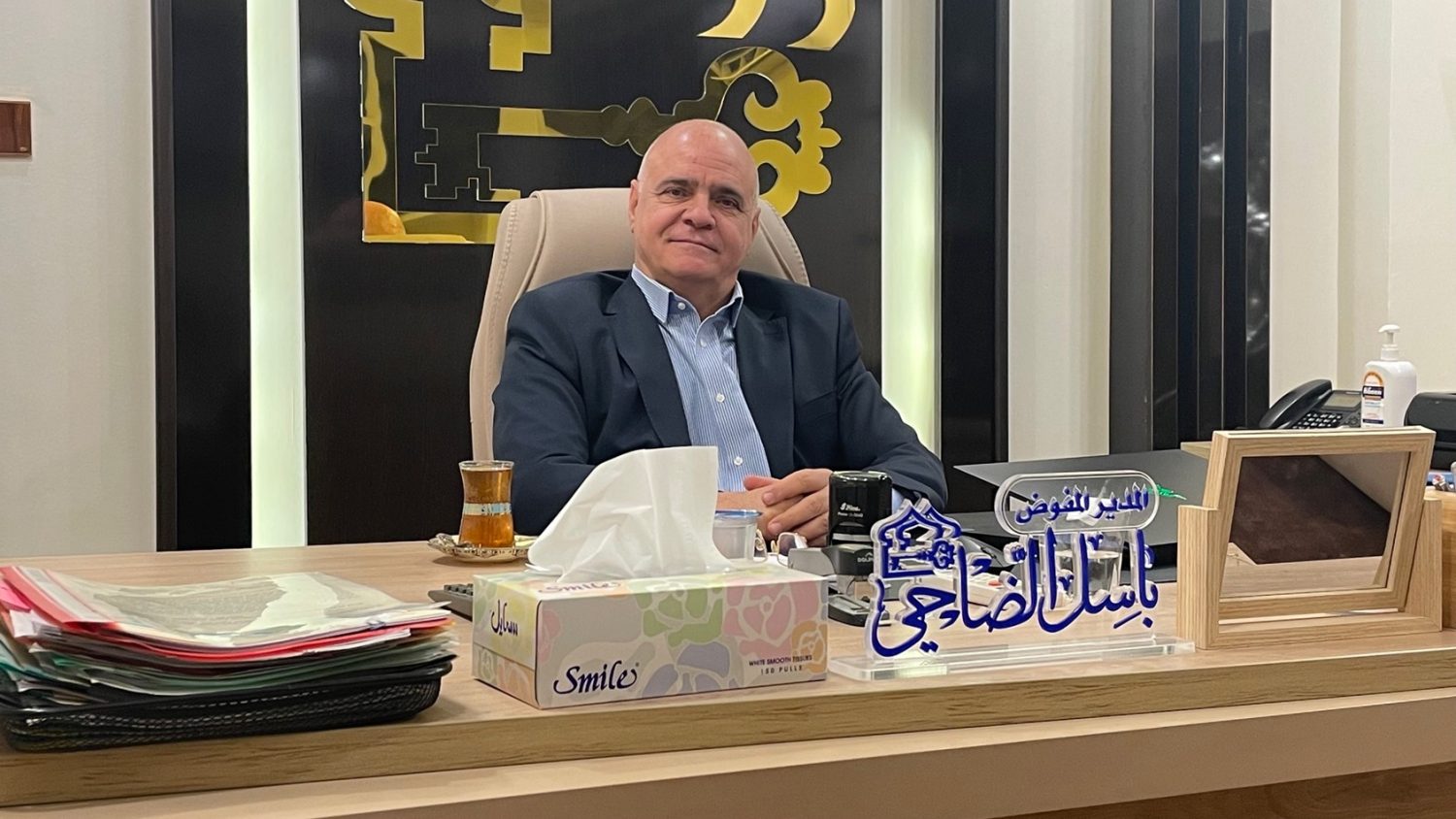 (Source: AFC Research, during a meeting with BBOB's management team on 31st October 2022)