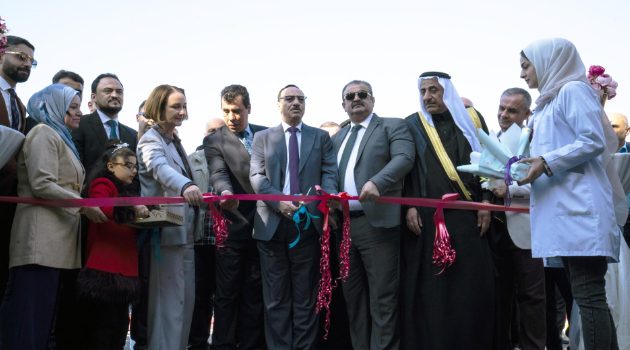 By Editor on 20th November 2022 in Healthcare

Taking care of the youngest: Mosul's only pediatric hospital, Ibn al-Atheer, and the University's Kindergarten reopen

The newly rehabilitated Ibn al-Atheer Hospital was officially inaugurated by the United Nations Development Programme (UNDP), the Federal Republic of Germany, the Ministry of Health and the Ninewa Governorate. As the only pediatric hospital in Mosul, Ibn al-Atheer will provide medical services to approximately 50,000 children annually.

Built in the late sixties, the hospital provided medical services to Mosul and surrounding areas in Ninewa, servicing a catchment population of over 500,000 children. However, the hospital was left significantly damaged during the ISIL conflict. As a result, only 135 of its original 261 beds, about 50 percent of its designed capacity, could be used. Only the most critical cases could be admitted and treated, since the hospital functioned with great difficulty due to the scale of destruction.

Through the Funding Facility for Stabilization, UNDP rehabilitated the entire building, including civil, sanitary, mechanical, and electrical works. Today, the hospital is operated and managed by the Ninewa Directorate of Health with over 400 medical and 200 administrative staff. In addition to providing improved health care services for children, the hospital will help retain hundreds of highly skilled medical personnel in Mosul.

The Kindergarten at the University of Mosul was also inaugurated today. It provides on-site childcare services for the University's professors, researchers and students. It is staffed by 35 teachers who provide daycare services to over 180 children. This will allow employees and students to continue their work or studies, while raising a family. The kindergarten is also home to a small puppet theatre set up by one of Ninewa's best-known puppeteers.

"The people of Mosul suffered greatly during the brutal ISIL reign. Due to its historical significance and massive destruction, UNDP prioritized rebuilding Mosul. Today's reopening of Ibn al-Atheer hospital and Mosul University's kindergarten is an important milestone in rebuilding this iconic city. With over 900 rehabilitation projects completed in Mosul, UNDP has worked tirelessly alongside the international community, the Ninewa Governorate and local community leaders to restore the city's vibrant life," says UNDP Resident Representative for Iraq, Zena Ali Ahmad.

"We would not be here today if not for the generous support from our largest and longest-standing partner, the Federal Republic of Germany. Together with Germany, we have made tremendous contributions towards stabilization in Iraq. We will continue to work together to safeguard the hard-won stabilization gains made since 2015 and to prevent ISIL resurgence," she adds.

"Rebuilding and improving public health services such as the Ibn Al Atheer pediatric hospital remains an urgent priority in Mosul. I am proud that Germany was able to help achieve this ambitious goal by funding the hospital's reconstruction. Overall, Germany has invested more than one billion USD in helping reconstruct Nineva Governorate," says Annette Chammas, Head of the Middle East Division of the German Federal Ministry for Economic Cooperation and Development (BMZ).

The rehabilitation of the Ibn al-Atheer Hospital and the University of Mosul's kindergarten school is funded by the Federal Republic of Germany, provided through KfW Development Bank.

"We at KfW Development Bank are pleased and honored to join in celebrating the inauguration of the Ibn Al Atheer pediatric hospital and University Kindergarten. Both facilities are indeed very special as they will directly contribute to the future of Iraq. The Hospital will provide essential health services to those in need and the kindergarten will provide a safe space where children will develop their talents and both emotional and physical skills," says Dr Christine Heimburger, Director of KfW Development Bank for Afghanistan, Pakistan, Iraq.

UNDP is the leading implementer of stabilization activities in Iraq. To date, UNDP has completed around 3,400 stabilization projects across the liberated areas of Anbar, Diyala, Kirkuk, Ninewa, and Salah al-Din. The programme has assisted 4.95 million internally displaced people to return home.